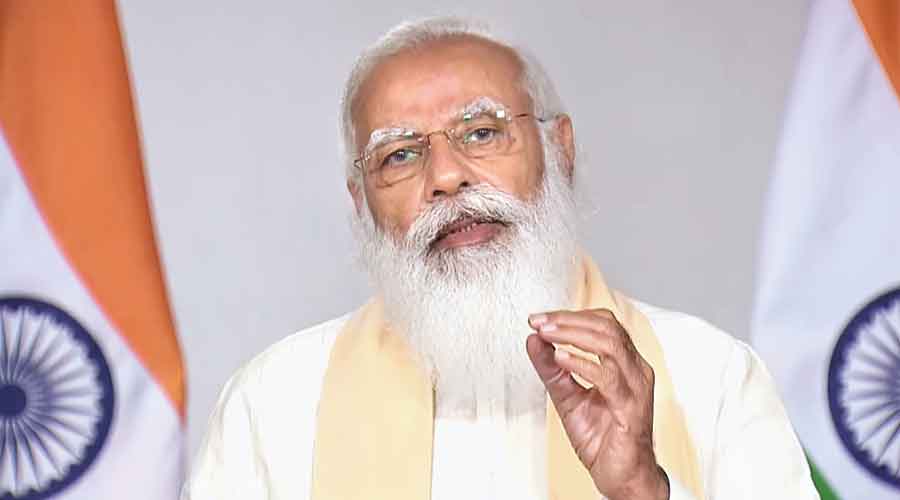 A 74-year-old retired professor has refused to take the Covid vaccine in protest at the vaccination certificates carrying Narendra Modi’s picture and has urged Opposition chief ministers to remove the Prime Minister’s image before issuing the slips.

Chamanlal, former dean of the school of languages at Panjab University, Chandigarh, said that when the British colonialists issued their demeaning compensation certificates to the families of the Jallianwala Bagh victims, even they had not put their pictures on the documents.

Another retired professor, Kancha Ilaiah, demanded that all the vaccination certificates be reissued without Modi’s picture and termed the current practice “unhealthy in a democracy”.

Only in poll-bound states such as Bengal do the certificates issued at the vaccination centres not carry Modi’s picture.

Chamanlal wrote an open letter to Punjab chief minister Amarinder Singh on Thursday, urging him and his counterparts in other Opposition-ruled states to have Modi’s picture deleted before the certificates are issued at state government facilities.

“In no other country of the world the vaccination certificate, if any, carries the photograph of any political leader, even (those) in power,” the letter says.

“At best the certificate might be carrying the signature (of the) medical officer of the area.... In India, we the hapless citizens are condemned to get the photograph of a leader... whose policies and criminal negligence is the cause of the worst explosion of corona(virus) deaths, especially in the second wave of Covid-19.”

Chamanlal suggested in an interview to The Telegraph that the government’s wilful neglect of preparedness made the human cost of the Covid resurgence comparable to British Indian forces’ massacre of hundreds of unarmed protesters at Jallianwala Bagh in 1919.

To add to the culpability, he alleged, the Prime Minister was indulging in a sort of “self-glorification that was not seen even among the British colonialists”.

Chamanlal cited the certificates that the then lieutenant governor of Punjab, Michael O’Dwyer, had issued to the Jallianwala Bagh victims’ families mentioning the payment of compensation of a few hundred rupees.

“But O’Dwyer did not use his picture on the certificate. What is happening now is worse than what the British did in 1919,” Chamanlal told this newspaper.

Ilaiah, who retired from the Maulana Azad National Urdu University, Hyderabad, said the display of the Prime Minister’s picture on the vaccination certificates had set a bad precedent.

“If some university or the other now decides to use his picture on the degrees it awards to students, will that be allowed?” he said.

“This is unhealthy in a democracy. The vaccine certificates should be issued again without Modi’s picture.”

Chamanlal has written to Amarinder that the Punjab farmers protesting at Delhi’s borders against the new farm laws are being harassed and the Centre is trying to evict them citing the Covid crisis.

He has written that the Punjab government, which supports the farmers’ agitation, should protest the Centre’s actions and remove Modi’s picture while printing the vaccination certificates.

He told this newspaper that the Punjab government had written back to him saying the chief minister had forwarded his letter to the state health secretary.

Chamanlal alleged that while Modi did not prepare the country for the second wave of the pandemic, he built “comforts and facilities for himself”, alluding to allegations that the government had bought aeroplanes amid the pandemic for the Prime Minister’s travel.

“All Opposition and society cried to spend this money on health services, building hospitals, infrastructure, but of no avail. Prime Minister was concerned more about building comforts and facilities for himself at the cost of people’s lives,” his letter says.

It accuses the Modi government of weakening public universities and autonomous institutions and mentions the crackdown on JNU in 2016 over the alleged chanting of “anti-national” slogans.

It castigates Modi for taking unilateral decisions that have caused great suffering to the public, such as the demonetisation, and questions the opacity around the PM CARES Fund.