Ex-prof writes to Modi, Adityanath asking to not change shape and nature of Ganga 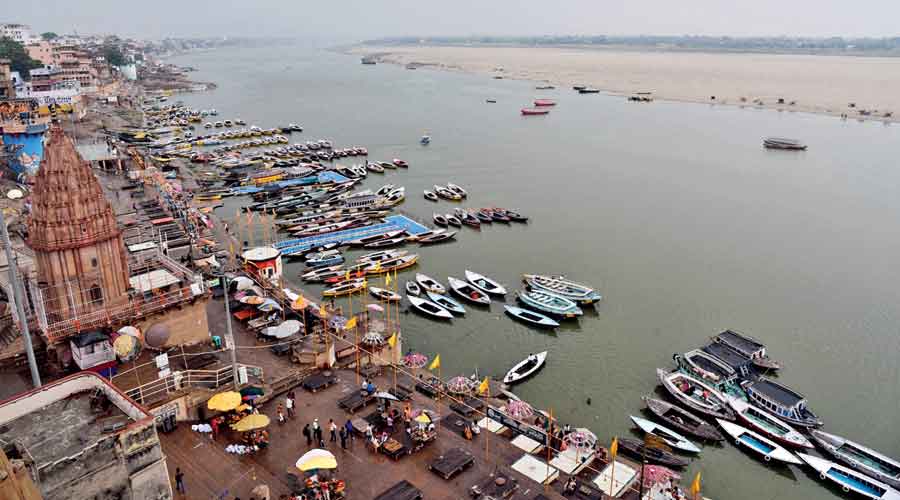 A retired professor in Varanasi has written to Prime Minister Narendra Modi and Uttar Pradesh chief minister Yogi Adityanath requesting them not to change the shape and nature of the Ganga and hinder its flow by constructing structures for a tourism project.

A local advocate has moved the National Green Tribunal seeking protection of the Ganga from “mindless constructions”.

The government plans to start a steamer service for tourists from Varanasi to the neighbouring district of Muzaffarpur for which it is building a jetty that juts 100ft into the river from Lalita Ghat and a canal-like channel that will have constant and consistent water flow for the river corridor. A temporary dam-like structure has also been built to create a water-free area along the length and breath of the under-construction jetty so that the platform can be built.

U.K. Chaudhary, a retired professor of civil engineering at the Indian Institute of Technology of Banaras Hindu University who has done extensive research on the Ganga, has stated in his letter to the Prime Minister and the chief minister that the semi-circular shape of the river at Lalita Ghat was not only its beauty but also aided the smooth flow of the water.

“Some construction work has been started in the middle of the Ganga at Lalita Ghat that will not only harm the river but also the city. The negative impact of such constructions will be visible in five-six years. As the natural flow of the water is being hindered, the river will deposit mounds of sand and earth at the ghats in the vicinity. There will also be heavy erosion on the bank on the city side,” Chaudhary told reporters.

He said the 100ft-long and 150ft-wide jetty was being built with the help of heavy machines.

“The Ganga has a semi-circular shape at Lalita Ghat. Besides the platform (jetty), the government has also built a dam-like structure there, which is obstructing the flow of the water and hampering the speed of the Ganga. Because of these constructions, water is receding from the Lalita Ghat and also the ghats nearby,” Chaudhary said.

“Since the natural flow of the river is getting affected, there will soon be deposits of an unmanageable quantity of sand and silt between Assi Ghat and Dashswamedh Ghat. Lalita Ghat is in the middle of the stretch of the 80 ghats of Varanasi,” he added.

Saurabh Tiwari, the Varanasi-based advocate, has filed a petition before the National Green Tribunal seeking immediate halt to the construction work on the Ganga. He accused the government of trying to change the original character of the Ganga by dredging it and creating a “canal-like channel” for the river-ride corridor.

“Varanasi is identified with the Ganga. We all know that there is an algal bloom on the Ganga in Vanarasi these days (because of lack of cleaning). Instead of cleaning the Ganga, the government is busy in making a huge platform on Lalita Ghat, a dam and a channel, all of which is obstructing the flow of the river,” Tiwari told The Telegraph.

Ashok Dwivedi, former president of the Kashi Vishwanath Temple Trust who is a member of a group of residents who have come together on Modi’s request to advise the government on local issues, tried to dispel fears that the river was being tinkered with.

“We recently spoke to the Prime Minister (who is also the Varanasi MP) about the apprehensions of the locals. He promised us that the actual character of the Ganga wouldn’t change. The Prime Minister said scientists had been told to ensure that the sanctity of Varanasi city is not violated,” Dwivedi said.

Deepak Agrawal, the divisional commissioner of Varanasi, told reporters: “Some beautification work is going on there. The actual character of the Ganga will be maintained. The idea is to boost tourism without changing the nature of the river in the city.”