Advertisement
Home / India / Covid: People’s misery forces its way to headlines
Gujarat language press tells it like it is

Vernacular newspapers, which were staunch supporters of the Modi-Shah duo, is doing more aggressive reporting on the horrors of the second wave 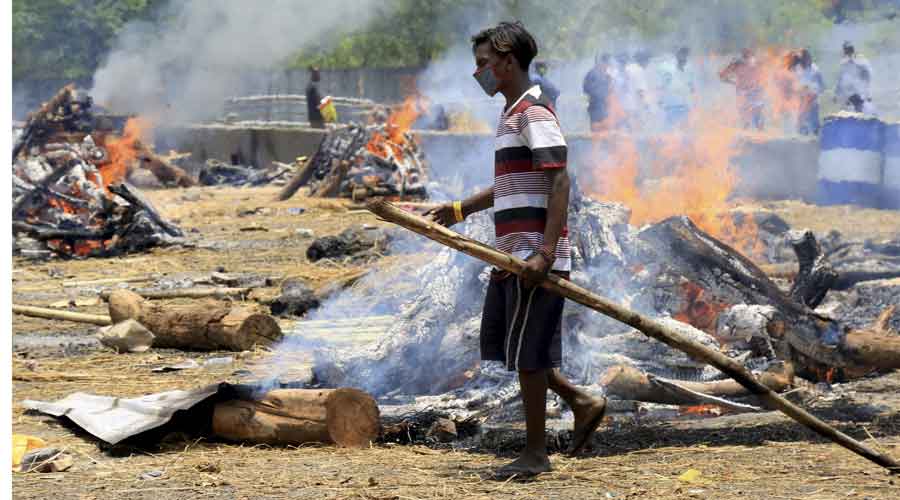 A few months ago such critical coverage of the Gujarat government would have been unthinkable from Divya Bhaskar, a Gujarati newspaper from the Bhopal-based Bhaskar group with editions from nine cities and towns in the state.
File picture
Sajeda Momin   |   Published 08.06.21, 12:34 AM

Much of the Indian media, particularly the vernacular press, has been blinkered at best in its reporting on the Narendra Modi government, putting a positive spin on all its mistakes for the last seven years.

However, there seems a slight change in the regional language press recently which is doing more aggressive reporting on the horrors of the second Covid wave and putting the blame squarely on mismanagement by the government.

In a shocking vindication of the foreign media that India’s real Covid figures —both cases and deaths — were suppressed by the government, Divya Bhaskar, a Gujarati newspaper in the home state of Prime Minister Modi and home minister Amit Shah, reported that between March 1 and May 10 this year, Gujarat issued 123,000 death certificates.

Similarly, when reports surfaced last month that there was a severe shortage of the drug remdesivir, Gujarat BJP president C.R. Patil announced he had 5,000 doses of it that would be made available free of cost by the party in Surat, a Covid hotspot.

Divya Bhaskar headlined Patil’s mobile number on the front page and told those in need to call him. It also asked the government how Patil had got so many doses of a medicine when only six doses can be sold to one person and that, too, against a doctor’s prescription.

A few months ago such critical coverage of the Gujarat government would have been unthinkable from Divya Bhaskar, a Gujarati newspaper from the Bhopal-based Bhaskar group with editions from nine cities and towns in the state.

The newspaper has since its inception in 2003 staunchly backed the Modi-Shah duo, both when they were ruling the state and after they conquered Delhi. So why the sudden change?

“Gujarat has suffered really badly this time, far worse than the first wave, so much so that apart from BJP supporters, even their leaders, MPs, MLAs, mahants — none has been spared by Covid. It’s their very own who are leaking stories to the press against the Rupani government, which has done nothing to alleviate their problems,” a senior editor with a Gujarati newspaper who did not wish to be named told The Telegraph.

“The readers have experienced such horrors with thousands dying every day; how can the media not reflect at least some of this if they wish to retain their credibility? These stories are coming out because of pressure from the readers.”

Divya Bhaskar, however, has not laid the blame at Modi’s door but accused chief minister Rupani of “mismanaging” the Covid response, toeing the BJP line of calling it a “systems failure”.

Gujarat Samachar, the big dad of Gujarati newspapers, has on the other hand been critical of both Modi and Shah’s positions in the run-up to the second wave, taking them to task for allowing the India-England Test matches in Ahmedabad and the super-spreader Kumbh Mela, and for holding election rallies.

Gujarat Samachar, with its daily readership of 4.6 million (according to 2014 data) from eight distribution centres, is perceived to be the real opinion maker in the state, and it has been viewed as anti-establishment and pro-establishment at different times.

Founded in 1932 by Vallabhbhai Patel and Morarji Desai as part of the freedom struggle, it has been a family-run newspaper since 1952, with current owner-editor Shreyans Shah taking over in 1984 when his father Shantilal Shah passed away.

A veteran journalist said he saw the newspaper as “inherently pro-BJP”. Efforts by this newspaper to elicit comment from the Gujarat Samachar did not yield results.

The English-language press is not emulating its vernacular counterparts for a variety of reasons. “I agree we are not reporting as aggressively as Gujarat Samachar or Divya Bhaskar, but we give a more balanced view taking into account what the government has to say as well,” said Ajay Umat, group editor of Ahmedabad Mirror and NavGujarat Samay, which are linked to the Times of India group.

Umat had worked with Gujarat Samachar in a senior position and later been launch-editor of Divya Bhaskar.

According to Umat, the English-language press tends to be more Ahmedabad and urban-centric as that is where its readership is. “Whereas Divya Bhaskar and Gujarat Samachar are both pan-Gujarat papers and have a reach even in small towns and villages in rural areas,” Umat said.

Unlike the first wave when Ahmedabad was the worst affected by Covid, this time the infection has spread to the rural areas with Surat and Baroda as the main hotspots.

“There is not a single family in the state that has not been touched by the dreaded disease. Some unfortunate families have lost two-three people in the space of days,” said Dr Jayashree Shah, 52, a gynaecologist in Baroda.

The vernacular newspapers have a larger network of reporters and stringers in rural areas than their English counterparts or the TV channels and can therefore bring out the real picture of the lack of facilities in even the remotest parts of the state.

It is believed that Hindi newspaper Danik Bhaskar sent out 30 reporters to 27 districts along the Ganga in Uttar Pradesh to unearth all the bodies buried on the riverbanks.

The Modi government has been accused of trying to silence sections of the Indian media by throttling the key source of revenue — advertisements — if they defy the party line.

“The more money you need to run your media house, the easier it is for the government to manipulate you,” said a television journalist. “The smaller TV channels try half-heartedly to ventilate the sentiments of the public but rely completely on Gujarat government ads, so they ‘balance’ it with government propaganda.”

The larger media houses like Gujarat Samachar and Divya Bhaskar have more clout and so have a little more wiggle room.

Shortages of hospital beds, oxygen, medicines, vaccines and ambulances, coupled with the black marketeering of essential drugs and facilities, have turned the pandemic into a living hell for the people.

“The public is broken -- no earning for the last one year, and yet there is sickness and death everywhere. There is a black market rate for everything and people don’t have the money to pay. The government is doing nothing. The media also know that if they don’t start showing the real picture, they will get beaten up,” said Naveen Bhatt, 38, a teacher.

Gujarat was a Covid hotspot even during the first wave but the media had initially channelled the public’s anger towards the Tablighi Jamaat, blaming it for the pandemic. However, the second wave has been far worse and there is no obvious communal angle to exploit.

“If the Gujarati press is questioning the state government at the moment, it is out of majboori (compulsion) and only temporarily. Soon the government will give them what they want and they will again start singing their praises and stop telling the truth,” the veteran journalist said.