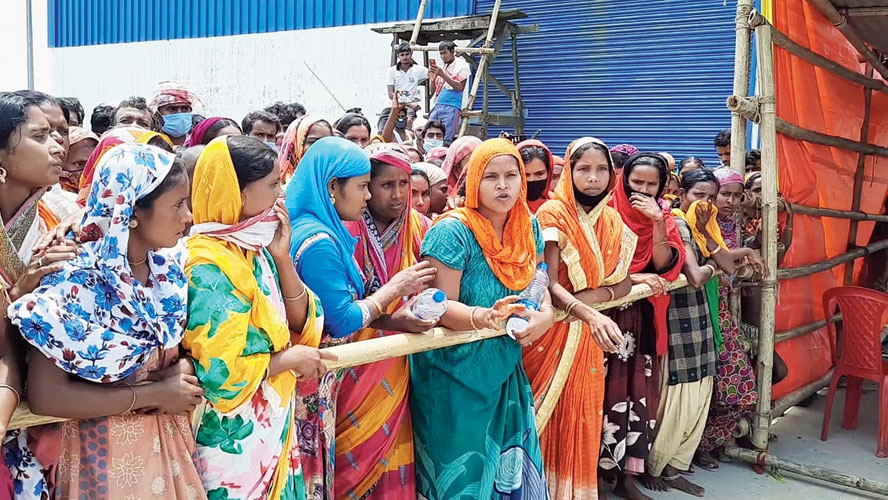 Returnee migrant labourers lodged at the centre claimed that they were only served food while items of daily use were not provided. They also demanded to be sent to home quarantine.

More than 404 residents of Tripura, including women and children, who have returned from outside, are lodged at the centre. Pregnant women and mothers of infants have, however, been sent to their homes after collection of swab samples, Dhubri Municipal Board executive officer Rahul Javir said. He claimed that the district authorities were ensuring that the migrant labourers do not face problems vis-a-vis facilities.

Javir, however, alleged that despite several requests, the inmates were not using dustbins on the campus and were throwing garbage in the open. The cleaning staff only collect garbage from the dustbins because if they enter the campus, they must wear personal protective equipment (PPE). In that case, four PPEs would be required in a day, which would be expensive. The campus, therefore, remains dirty all day.

A similar ruckus was reported from the quarantine centre at Panbari, 20km from Dhubri town, a few days ago.

Data provided by the Dhubri district health authority says there are 106 mass quarantine facilities, which lodge 12,023 inmates, in the district. Till the filing of this report, 11,627 swab samples had been collected in the district, of which 5,843 were found to be negative. The test report of 5,773 samples are awaited. The district has reported 13 cases so far, of which five patients have recovered.

In Tinsukia district of Upper Assam, people residing in the vicinity of quarantine centres allotted for migrants returning home appealed to the administration on Thursday to regularly check the centres to ensure prevention of the spread of the disease.

Earlier, a complaint was lodged at Doomdooma police station that inmates of Doomdooma Dharamshala quarantine centre spit out of the windows. The police found the complaint to be correct and immediately closed all the windows there.

According to reports, the administration is using a hotel’s upper storey as a quarantine centre while tea and sweet shops are being run on the building’s ground floor. A complaint was lodged in this regard by the Asomiya Yuva Manch with the Margherita sub-divisional officer and the Digboi police station officer-in-charge.

The inmates of Phillobari Model Hospital, a quarantine centre, uploaded a video of the quantity of food being supplied to them on social media, after which the food suppliers resolved the matter.

Sources said people in the rural areas are observing the guidelines more judiciously. Youths sent to home quarantine on the outskirts of villages have been observing the health department’s guidelines completely.

The All Moran Students’ Union have visited several quarantine centres and offered soap and sanitisers to the quarantined. They also met the family of a Covid patient at Saikhowa.

The Covid guidelines issued by the Centre include basic sanitisation and adequate distance between healthcare workers and patients at quarantine centres.