Bodies of Covid dead pile up at Lucknow crematoriums

On Wednesday afternoon, there were 124 bodies at Baikunth Dham and Gullala Ghat; the figures were 120 and 130 on Tuesday and Monday 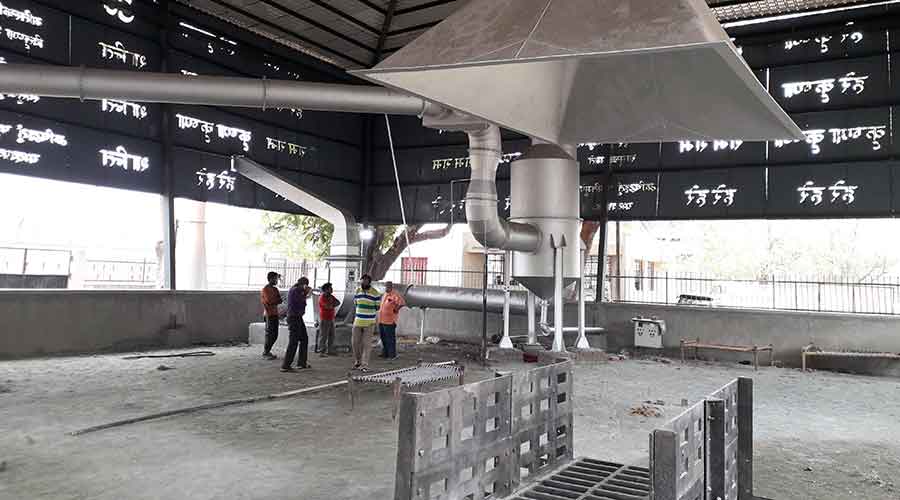 Bodies of the Covid dead are piling at the two cremation grounds in Lucknow as the pandemic surges through Uttar Pradesh.

On Wednesday afternoon, there were 124 bodies at Baikunth Dham and Gullala Ghat, according to crematorium staff. The figures were 120 and 130 on Tuesday and Monday.

The crematorium staff said that based on their conversations with family members, they had learnt that most of the dead were Covid patients who had died in hospitals or while waiting for beds.

Usually, around 20 bodies are cremated at Baikunth Dham and 10 at Gullala Ghat.

On Wednesday, Uttar Pradesh recorded an all-time high of 20,510 cases, with Lucknow alone reporting 5,433. The official death toll for the state was 68.

The two electric incinerators at Baikunth Dham and one at Gullala Ghat have not been enough. On Wednesday afternoon, 60 beds of firewood were laid at the two crematoriums. However, there were still 50 bodies in the queue.

“They have made beds of firewood but we need more to cover a dead person before burning the body. The cremation ground staff have demanded Rs 7,500 from us to arrange for more firewood for my father and wait till 4am on Thursday for space at Baikunth Dham,” said Rohit Singh, a postgraduate student whose father died of Covid-19 on Tuesday night.

Sanjay Kumar, whose neighbour in old Lucknow died of Covid-19 on Tuesday evening, said: “The police are extorting money from us in the name of traffic rules. They fined my neighbour Rs 4,000 for parking his car in the parking area of Gullala Ghat. Either you bribe them Rs 1,000 or they would impose a fine on you.”

“Come to Lucknow if you want to see the dance of death. The vultures are there at every place in the city to blackmail you, extort you or exploit you in the name of the coronavirus,” Kumar added.

Dipu Pandit, an employee at Baikunth Dham, said: “The number of the dead has risen sharply in the past three days. We are trying our best to help the relatives of the dead.”

“The rate of firewood at the cremation ground is Rs 550 per quintal,” he added.

“Some contractual employees of the Nagar Nigam have been deployed here and they are trying to blackmail the relatives and friends of the dead. The police have also started imposing fines on those who park their vehicles outside the Dham. It is happening for the first time here,” said another employee of Baikunth Dham, requesting anonymity.

D.K. Thakur, the police commissioner of Lucknow, said: “Those who have been fined for parking their vehicles outside the cremation grounds can contact the helpline for relief.”

Ajay Kumar Dwivedi, the municipal commissioner of Lucknow, said: “There is enough firewood at the cremation grounds. We appeal to the people not to pay any heed to rumours.”

Social media has been flooded with a video of a senior government administrative official in Lucknow telling doctors during an informal conversation: “People are dying on the roads now.”

Kaushal Kishore, a BJP MP from Mohanlalganj in Lucknow, on Wednesday appealed that the impending panchayat polls be deferred.

“The situation in Lucknow is out of control. There are dead bodies piling up at the cremation grounds. I appeal to the Election Commission to postpone the panchayat polls in the state (to be held between Aril 15 and 29) as saving the lives of the people should be the priority.”

On Tuesday, Uttar Pradesh law minister Brijesh Pathak had written to the health department mentioning that he was receiving calls from people every day for hospital beds for their Covid-afflicted relatives but he had failed to help them.

Congress leader Priyanka Gandhi Vadra held a videoconference with leaders of her party in Uttar Pradesh and said: “It is sad that the state government is increasing the capacity of crematoriums instead of beds in hospitals.”

In UP, even dead have to queue up