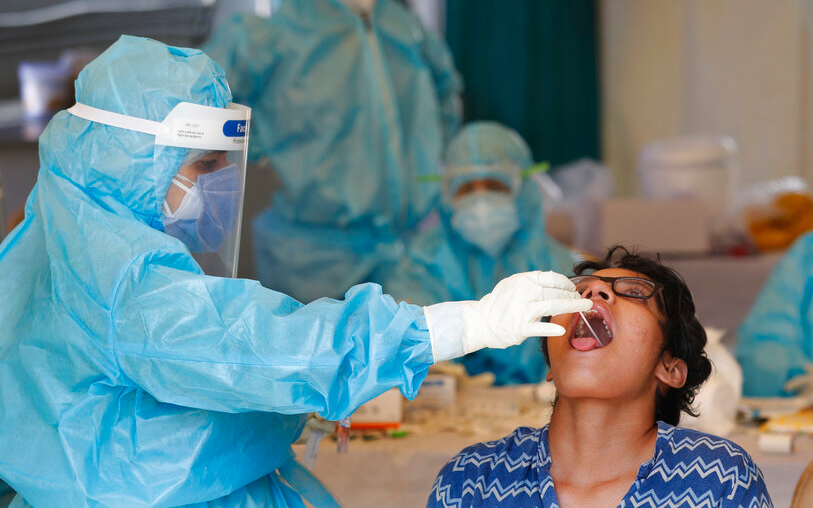 The Indian Council of Medical Research (ICMR) conceded on Monday that the rapid antibody test kits it had procured from two Chinese companies to detect novel coronavirus infections had failed in field tests.

The admission brings into question the test validation process of the apex medical research body in India and the general perception that the least expensive product discovered through auctions is always the ideal option.

The ICMR, in a letter released on Monday, asked all the states and Union Territories to stop using the antibody kits procured from the two Chinese companies, citing their poor performance “despite early promise of good performance for surveillance”.

The health research agency said it had decided to “cancel” the orders from the two companies. But 2.74 lakh kits had already arrived and been distributed to several states last week and 2.24 lakh additional kits were expected to arrive last weekend.

The committee picked the lowest bid offer from the company named Wondfo for nearly 5 lakh kits. The details of the second company have not been provided with clarity.

The price has already been at the centre of a storm after the Opposition found it unfair that the Chinese kit with a landed cost of Rs 245 a piece had been sold to ICMR for Rs 600. The same distributor sold the same kit to the Tamil Nadu government for Rs 400.

Sections of scientists say the sequence of technical events raises questions about the validation process the ICMR adopts to approve candidate tests, relying entirely on its own scientists instead of allowing independent assessment.

Some are also speculating whether and how the standard government procurement process may also have influenced the decision on which antibody test kits to choose from among multiple bids.

“Our obsequious compliance with the lowest price in the system of tendering to procure items, where quality should be the sole decisive factor, is likely a pathetic example of our compulsions to prove our morality in decisions that we take as scientists in this country,” said a senior scientist who was not associated with the procurement process.

“In crude language: we are more interested in trying to prove that we are not thieves than in doing the right thing,” said the scientist who works as a senior faculty member in an academic institution.

Some scientists had earlier this month also questioned the ICMR’s decision to procure the antibody kits in haste despite advisories from health authorities in the UK and the US about their lack of reliability.

The tests, which take less than 30 minutes, look for antibodies against the coronavirus generated by the human body in the bloodstream in response to the infection. In contrast, the diagnostic test looks directly for viral genetic material in throat or nasal swabs and takes around two hours.

The ICMR said it had begun scouting for antibody tests amid demands from some states and against the backdrop of a huge global demand marked by countries applying their “monetary and diplomatic” might to procure the test kits.

The two Chinese test kits were among 14 from different companies described by the ICMR on April 14 as “satisfactory” on the basis of validation tests by the ICMR’s National Institute of Virology (NIV), Pune.

Nine of the 14 kits, according to the ICMR’s April 14 document, “are manufactured in India”.

The ICMR said it had decided to procure the kits through Wondfo’s exclusive distributor in India because for direct procurement, the manufacturer had insisted on “100 per cent advance (payment) without guarantees” and without commitment on timelines, among other reasons.

“The ICMR has not made any payment whatsoever… the Government of India does not stand to lose a rupee,” it said.

“Why couldn’t the kits be independently validated before they were distributed among the states?” asked Koustubh Panda, professor of biotechnology at the University of Calcutta, who is among scientists questioning the hasty procurement of antibody kits.

In the UK, the government had entrusted a University of Oxford research group to evaluate similar antibody test kits that the researchers through their analysis found were unreliable.

“We should have started our own research efforts to design antibody kits a month ago,” said Panda. “We have adequate expertise to design kits based on viral strains circulating in this country.”

The ICMR has said it is looking at antibody tests only for surveillance to track the developing patterns of the infection over specific geographic areas and not for diagnosing the infection in individuals.

PTI: China on Tuesday said it was 'deeply concerned' over the evaluation result of the Covid-19 rapid testing kits supplied by two Chinese companies and subsequent decision by the ICMR to not use the equipment, and hoped that India will resolve the issue 'reasonably'.

'We are deeply concerned with the evaluation results and the decision made by the Indian Council of Medical Research. China attaches great importance to the quality of exported medical products,' Chinese embassy spokeperson Ji Rong said.

In a statement, she also said it is 'unfair and irresponsible for certain individuals to label Chinese products as 'faulty' and look at the issues with preemptive prejudice'.

Ji, however, did not clarify who are the individuals she was referring to.

At the same time, the spokesperson said China will continue to support India's fight against the pandemic and will jointly work with New Delhi to overcome the challenge 'at an early date' to protect people of the two countries from the infection.

In her statement, Ji said the Chinese embassy has maintained close contact with the ICMR and the two Chinese companies to find out the 'real situation', adding Beijing not only sincerely supports India in its fight against Covid-19 but has also been taking concrete actions to help it.

'The Covid-19 antibody rapid test kits produced by these two Chinese companies have been exported to and well-recognised in many countries in Europe, Asia and Latin America,' Ji said.

'We have also learned that there are strict requirements for the storage, transportation and use of Covid-19 antibody rapid test kits. Any operation which is not carried out by professionals in accordance with the product specifications will lead to the testing accuracy variations,' she added.

The Chinese embassy spokesperson hoped that India would respect 'China's goodwill and sincerity, strengthen communication timely with relevant Chinese companies based on facts, and resolve it reasonably and properly.'