Sitharaman once again comes up with a grossly under-funded set of measures totalling Rs 6.29 lakh crore, or 2.82% of the nominal GDP of Rs 222.87 lakh crore 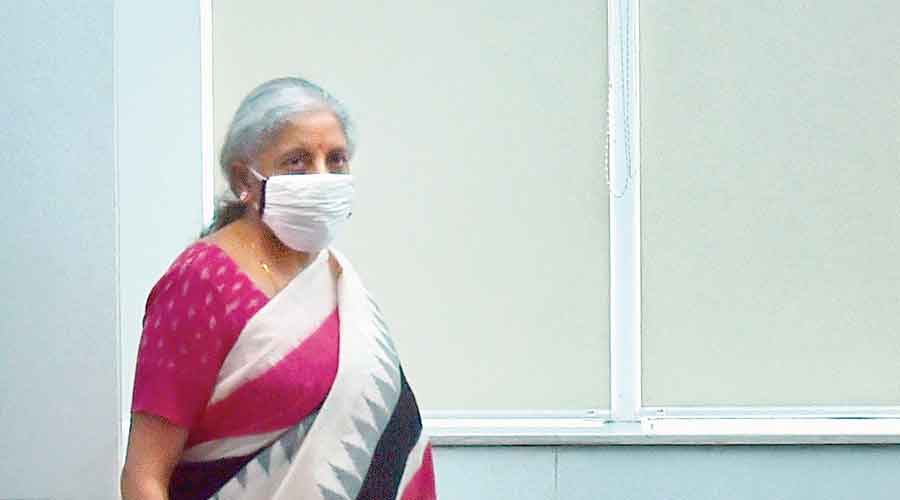 Union finance minister Nirmala Sitharaman rained another confetti of big numbers to create another chimera around her second stimulus package for a Covid-battered economy that left industry, economists and the markets poring over the figures to understand how much was real and how much mere illusion.

Like the staccato announcements in May last year that formed part of the first stimulus package, Sitharaman once again came up with a grossly under-funded set of measures that totalled Rs 6.29 lakh crore, or 2.82 per cent of the nominal GDP of Rs 222.87 lakh crore projected in this year’s budget.

More than three-quarters of the stimulus package is built around government guarantees (Rs 267,500 crore), rosy estimates of outcomes from exports and a valiant attempt to prop up a crumbling power distribution sector (Rs 218,631 crore) — which tries to cast a glow of optimism around an economy that shrank by 7.3 per cent last year and has shown very little signs of recovery over the next few quarters.

Government guarantees are in the nature of promises that the Narendra Modi regime will provide a back-stop if creditors default on loans that they take from banks.

“The overall cap for admissible guarantees is being raised from Rs 3 lakh crore to Rs 4.5 lakh crore,” Sitharaman told a media conference. The additional Rs 1.5 lakh crore has been tacked on to the Emergency Credit Line Guarantee Scheme (ECLGS) that was announced last year to provide loans to stressed entities.

A new Rs 1.1 lakh-crore guarantee scheme has been created which will be divided between the health sector (Rs 50,000 crore) and other stressed sectors (Rs 60,000 crore).

Loans will be given to the health sector to expand or create new medical infrastructure outside eight metropolitan cities. The maximum loan granted will be Rs 100 crore and the tenure has been set at three years. The interest rate on these loans will be capped at 7.95 per cent.

Loans to other sectors will be provided at 8.25 per cent.

The guarantees provide comfort to lending institutions but there is no evidence that anyone has cashed in on them — or ever will — especially after the lending institutions were persuaded to prepare a two-year debt restructuring scheme for last year’s defaulters, effectively kicking the can further down the road.

The other big mirage is around exports — with the government counting up outcomes rather than stumping up money upfront in the form of incentives or raising its spending to stoke demand.

The Centre has proposed to create an additional corpus over the next five years to enable the Exim Bank to underwrite project exports worth Rs 33,000 crore under the National Export Insurance Account. The government gave no details about how this would be funded.

It also proposed to infuse equity in the Export Credit Guarantee Corporation (ECGC) over the next five years to boost insurance cover by Rs 88,000 crore. Again, it did not say how much of equity it planned to pump into the ECGC or explain the correlation between equity infusion and the surge in insurance cover. For the record, equity infusion in the ECGC rose by a mere Rs 1,200 crore between 2015-16 and 2019-20, for which details are currently available.

In 2019-20, the ECGC’s equity capital was raised by Rs 500 crore to Rs 2,500 crore -- and there will be questions about the sleight-of-hand through which small doses of capital in the ECGC can whip such a massive froth of numbers.

Some experts charitably estimated the “real” funding in this stimulus package at Rs 1.18 lakh crore. This was broken into three components: a sum of Rs 93,869 crore earmarked for the distribution of free food grain till November under the Pradhan Mantra Garib Kalyan Anna Yojana, the additional Rs 15,000 crore that the Centre intends to spend on the health sector, and half of the sum of Rs 19,041 crore that will be spent over the next two years under the BharatNet programme which seeks to create rural broadband connectivity under public-private partnership.

The food grain programme had been announced sometime ago by Prime Minister Narendra Modi after the cabinet approved it. The big number was padded to the second stimulus programme to provide some heft to the numbers.

D.K. Srivastava, chief policy adviser at EY India, said: “The total additional burden on the 2021-22 budget from these three initiatives would be Rs 118,390 crore. This amounts to about 0.5 per cent of the estimated GDP for 2021-22. Although this is a limited magnitude of direct stimulus, it would be desirable to follow it up with another dose of stimulus later in the year.”

He reckoned that the Centre would come out with another package soon which might contain spending announcements. “I’m expecting another 0.5 per cent of GDP as additional expenditure, which could include cash transfer, over the coming months. There will be pressure on the RBI to support the government’s borrowing programme, even though it may not be direct monetisation,” he added.

Others felt that Monday’s stimulus package looked a lot worse if one looked beyond the smokescreen of numbers.

“Setting aside the guarantee schemes and the announcements that had already been made prior to today, the increase in the fiscal outgo based on the fresh announcements is estimated at around Rs 60,000 crore,” said Aditi Nayar, chief economist at credit rating agency ICRA.

The government said it would waive visa fees for 5 lakh foreign tourists in an attempt to revive the moribund tourism industry. It will also provide loans of up to Rs 10 lakh to travel agencies and related businesses while registered tourist guides will be eligible for a loan of up to Rs 1 lakh.

“Free visa is an excellent policy decision but should be extended to all foreign tourists till March 31, 2023, and not limited to 5 lakh tourists only,” said Rajiv Mehra, president of the Indian Association of Tour Operators (IATO).

The stimulus plan made an ineffectual stab at job creation by extending the scheme to incentivise employers to hire more people till March 30 next year.

The scheme, which seeks to provide subsidies for two years to firms hiring new employees drawing monthly wages of less than Rs 15,000, was supposed to end on June 30.

Sitharaman said the government was committed to doubling farm income but waffled when pressed for details. The package provides for Rs 14,775 crore as subsidy for the popular phosphatic fertiliser DAP (di-ammonium phosphate) and other complex fertilisers this year.