Poor people, without a support system, were the worst sufferers of the partial and complete lockdown, the survey released by Azim Premji University suggests 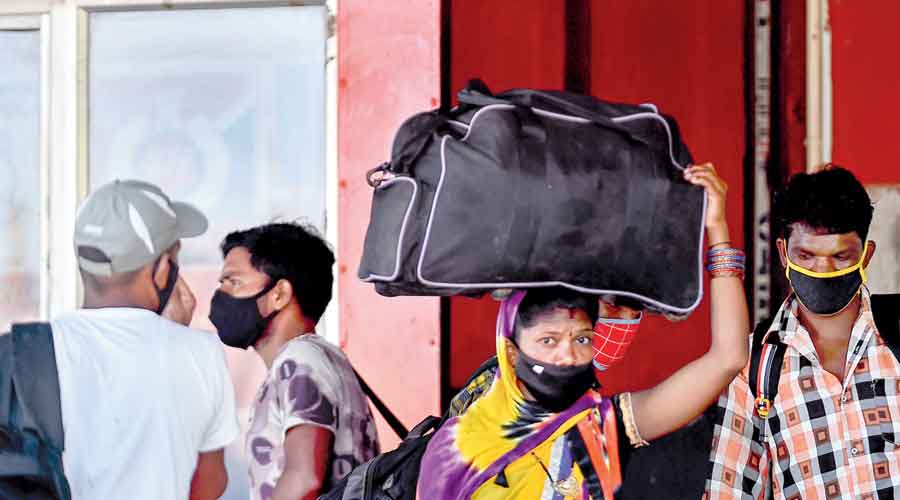 People head to their native places from Chennai on Monday after a two-week lockdown was announced by the Tamil Nadu government
PTI
Our Special Correspondent   |   New Delhi   |   Published 11.05.21, 12:53 AM

Household income in over a dozen states that have imposed full or partial lockdown may well be heading for a decline in the ratio of 80 per cent to the reduction in public movement, a a study has shown.

The State of Working India 2021 report released by the Azim Premji University (APU) has found a correlation between the reduction in mobility of people in a state owing to the lockdown in 2020 and the drop in family income in that state.

Professor Amit Basole, author of the study, said it used Google data on the reduction in monthly mobility of people during March-October 2020 compared with January-February 2020.

Google prepares community mobility reports that capture data from users who have turned on the location history setting.

The Google data give details on mobility trends for retail and recreation, supermarket, parks, public transport and workplaces.

“In April and May last year, the report suggested a sharp fall in mobility because of the lockdown. It picked up from June. When compared with the household income as captured by surveys of Centre for Monitoring Indian Economy, there is a direct correlation,” Basole said.

“Since everybody’s income is not dependent on mobility, there is no 100 per cent correlation between reduction in mobility and income loss,” Basole explained.

The analysis of last year’s data is relevant since several states have already enforced complete lockdown while a few others have gone for partial lockdown. States such as Tamil Nadu, Kerala, Odisha, Delhi, Kernataka, Rajasthan, Bihar, Haryana, Punjab, Madhya Pradesh, Chhattishgarh and Goa have gone for complete lockdown or curfew. States such as Maharashtra, Bengal, Assam, Nagaland and Jharkhand have also imposed restrictions on public gathering.

“Now, because of the Covid spread, lockdown is necessary. The government should come out with a support package. Our study has shown the poorest were hit heavily. The same situation may arise this time, too,” Basole said.

The poor have already started feeling the shock of the lockdown.

Guna Nayak, a migrant worker in Delhi who depends on daily work to support a family of three, said:

“Since April 20 when the Delhi government imposed the lockdown, I have managed to get five days of work. In some lanes or sub-lanes, a few contractors are still doing work inside houses. I worked with them for five days. How long should I stay at home? I had no money.”

Nayak said he was yet to get any assistance from the  Delhi government or any NGOs in Kotla Mubarakpur locality.