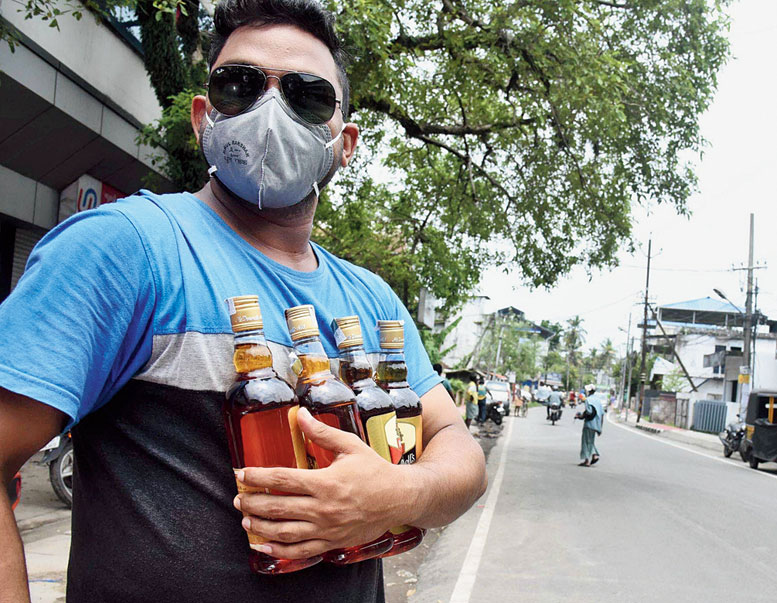 A state-run pharmaceutical company in Kerala has swum against elementary business wisdom and shut down its sole retail outlet when it found that queues were growing longer for its affordable hand sanitiser.

The Kerala State Drugs and Pharmaceuticals Ltd smelt a rat as the queues were unusually serpentine even for a state that takes pride in its public health and hygiene record.

The cat was out of bottle, so to speak, soon enough: many hand-sanitiser customers were using the ethanol-based product as an alternative to liquor. Several had turned up with soft-drink bottles and they were later seen drinking the toxic cocktail.

“We took the decision to shut the retail outlet in consultation with local police and the excise department since hand sanitiser is not for internal consumption,” Kerala State Drugs and Pharmaceuticals Ltd chairman C.B. Chandrababu told The Telegraph earlier this week.

“It is dangerous if consumed internally since the hand sanitiser we manufacture is ethanol mixed with hydrogen peroxide, glycerine and distilled water,” Chandrababu said, citing the reason to close retail outlet of the company based in Alappuzha in south Kerala.

The company, whose portfolio includes several pharmaceutical products, started making hand sanitisers after the state government asked it on March 11 to manufacture the product that was running out of supply since the outbreak of the coronavirus.

It was perhaps the price of the hand sanitiser sold by the company that attracted tipplers starved of alcohol that was banned in the state after the virus outbreak. Liquor sales resumed on Thursday, aided by an app that facilitates virtual queues.

“We sell hand sanitiser bottles of 500ml for Rs 173, while others cost up to Rs 570 depending on the brand,” Chandrababu said.

The state had used prison labour to manufacture affordable hand sanitisers to meet the shortage. In the only such incident so far, a remand prisoner had died in Palakkad in north Kerala after consuming a hand sanitiser made by the district jail where he was lodged.

“We didn’t want something similar to happen to any one who purchase it from our outlet. So we decided to close it,” said Chandrababu.

The vigilance teams of the police in Alappuzha in south Kerala and the state excise department had a discussion with the pharmaceutical company on Monday before it shut the retail outlet.

“The alcohol percentage in hand sanitisers is way more than what is found in liquor. While regular hard liquor has about 40 per cent alcohol, hand sanitisers contain twice that amount,” said Asheel, who is one of the key medical experts involved in Kerala’s battle against the coronavirus.

“Consumption of hand sanitisers could lead to the permanent damage of internal organs or even fatality. So we have been trying to educate people about the danger of consuming it,” the doctor said.

But the closure of the retail outlet wouldn’t affect the production of hand sanitisers at the company that has so far made 15 lakh litres.

On certain days it sold hand sanitiser worth Rs 8 lakh since the market is huge. The product will now be sold only through retail channels, apart from orders from regular users.

Although liquor sales have resumed now, Chandrababu has no plan to reopen the retail outlet. “The hand sanitiser we sell is cheaper than many liquor brands. So we don’t want to take a chance,” he said.