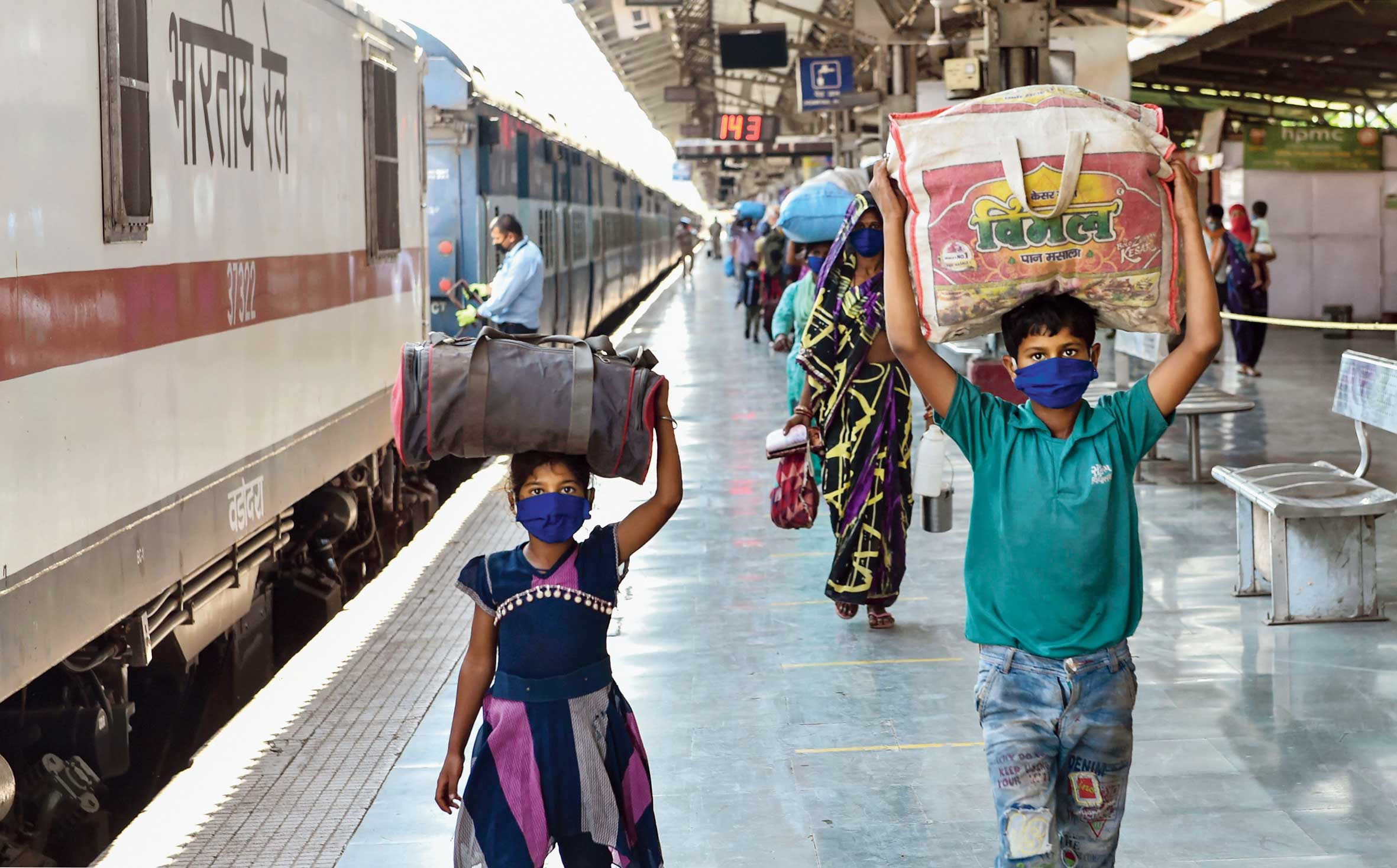 Migrant workers and their families make their way out of Charbagh station in Lucknow on Wednesday after arriving by a special train from Maharashtra.
(PTI)
Basant Kumar Mohanty   |   New Delhi   |   Published 07.05.20, 12:11 AM

The poor implementation over the years of a law that provides for keeping official records of migrant workers, safeguards their wages and strives for equal pay for equal work, and now the Centre’s plan to do away with it altogether, has robbed the vulnerable labourers of a shield designed to protect them during emergencies.

The Inter-state Migrant Workmen (Regulation of Employment and Conditions of Services) Act, 1979, is one of the most shoddily implemented laws in the country, but it at least seeks to better protect this particularly vulnerable workforce, especially during a crisis such as the pandemic-induced lockdown, labour economists and workers’ unions feel.

But now, the Centre’s Occupational Safety, Health and Working Condition Code Bill, which is pending in Parliament, seeks to subsume 13 existing laws, including the 1979 rule, and also signals the government’s intent on law aimed at insulating the migrant workers from exigencies.

The Inter-state Migrant Workmen (Regulation of Employment and Conditions of Services) Act, 1979, has a specific provision for the registration of workers by labour contractors in the states of origin and also the destination states. Such a provision, albeit poorly carried out, provided a scope of keeping official records of migrant workers in case of any exigency.

If the labour contractor does not pay wages to the migrant workers, the principal employer, or the company, will have to pay, the 1979 law mandates. It also provides for the payment of travel allowance for to-and-fro journeys.

According to the law, all establishments and contractors will have to maintain records of the migrants workers employed, the wages paid to them and the nature of work assigned to them. The records and the facilities provided are to be inspected by government officials. Any person obstructing inspection can be punished with imprisonment up to two years. Violation of any other provision of the law attracts a punishment of two years in jail.

The Act also lays down that the migrant workers will not be paid less than the minimum wage and the wage being received by other workmen in a similar establishment.

The Occupational Safety, Health and Working Condition Code Bill, however, is silent on the registration of migrant workers and the provision for equal pay for equal work. It only says that the workers will be appointed through an agreement with the contractor or the establishment, besides providing for a travel allowance.

Academics and workers’ unions say the 1979 law, if implemented well, will help the state governments address the current humanitarian crisis to a great extent, where migrant workers have been left without any work due to the lockdown and also were initially made to pay for the train journey back home.

Prof K.R. Shyam Sundar, a faculty member of labour studies at Xavier School of Management in Jamshedpur, said the 41-year-old Act on inter-state migration was the least implemented law in the country, like the Building and Other Construction Workers Act of 1995. The two laws are connected since they seek to protect migrant workers.

“The entire issue of which state should bear the travel cost even would not have arisen given the extraordinary circumstances like the Covid-19 pandemic, which has effectively terminated the employment contracts of these workers,” Sundar told The Telegraph.

“The data would have helped in reaching relief and assistance to the needy workers at the places where they are staying. Such measures would have assuaged the workers who have had to walk miles or wait for trains and prevented much of the unrest caused by their hapless and desperate conditions,” he added.

The Occupational Safety, Health and Working Condition Code Bill, while providing for the safety and proper health of workers, has a general provision on the reporting of accidents. It again states this provision with respect to migrant workers, requiring the employers to provide “suitable conditions of work” to this section because they are working “in a state different from their own state”.

Sundar questioned this iteration, especially because no special safeguards have been laid down for the migrant workers. “Ideally, when a law has a general provision of occupational safety, it should be extended to all kinds of workers. Repeating this provision for migrant workers defeats the principle of parity. This is not a good legal construction,” he said.

CPM labour arm Citu has urged the government not to abandon the provision of registration of migrant workers.

“Everything will be left to an agreement under the occupational safety code bill. The workers are so vulnerably that they do not have any bargaining power and are at the receiving end of exploitation. There is no provision for equal pay for equal work in this bill,” Citu leader Tapan Sen said.

He said the 1979 law must be further strengthened, making it an unavoidable obligation for both the central and the state governments and the employers to register all migrant workers.

The Occupational Safety, Health and Working Condition Code Bill has been examined by the Parliamentary Standing Committee on Labour. The labour ministry has told the committee that the bill is aimed at promoting “ease of doing business”.

The committee has recommended that a separate chapter on migrant workers be incorporated in the bill, not just a few provisions. It has recommended the creation of help desks, seasonal hostels for children of migrants and migration support centres.