Need to speed up wage rules

Implementation of threshold to be a relief for unorganised sector now: Economists 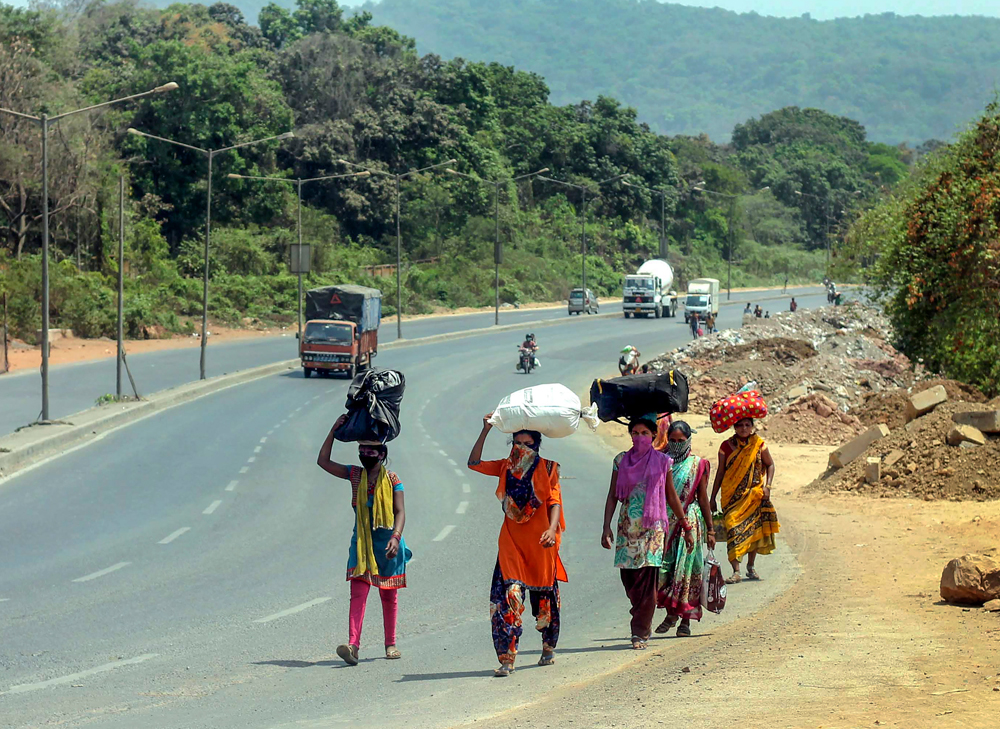 Migrant workers and their family members walk on the national highway to reach their native place in Jalgaon district of Maharashtra, during a nationwide lockdown, in the wake of coronavirus, in Mira Bhayandar area of Mumbai, Thursday, April 30, 2020.
(PTI)
Basant Kumar Mohanty   |   New Delhi   |   Published 30.04.20, 11:43 PM

Labour economists have suggested the Centre speed up the notification and implementation of its minimum wage rules, expected in a matter of weeks, hoping these would provide some relief to the unorganised-sector workers amid the lockdown woes.

Some of them, though, are unsure to what extent the smaller employers, hit by the Covid-19 crisis, would be able to pay workers according to the revised and binding minimum wages.

One labour economist suggested the government introduce provisions to force private employers to establish dedicated funds so that employees can be paid their full wages during crises and those downsized can be paid a dole. Others, however, said it’s the government that should bear the principal burden of these funds.

Government sources have told The Telegraph that the law ministry is in the final stages of vetting the new wage rules and these would be notified in May.

These rules will clear the decks for the implementation of the Wage Code, passed in Parliament last year, which provides for a minimum wage for the entire country that will for the first time be binding on the states.

Currently, the Centre notifies a national floor-level minimum wage which is not binding on the states, some of which — including Gujarat — prescribe lower minimum wages for certain types of work.

A labour economist who did not wish to be quoted hoped the new wage rules would greatly reduce the stress on the workers, who he said were the worst sufferers of the Covid-19 outbreak.

“Now the minimum wage will be higher than what most of the states prescribe. It will ensure the flow of more money to the workers, who will spend it on consumption, helping revive the economy,” the economist said.

“The faster the rules are notified and implemented, the better for the unorganised-sector workforce.”

The Centre has rejected a report submitted last year by a government-appointed committee that suggested a national minimum wage of Rs 375, at July 2018 price levels. The committee was headed by Anoop Satpathy, fellow at the V.V. Giri National Labour Institute.

Once the wage rules are notified, the Centre will set up an advisory body to determine the floor-level wage that will be a binding national minimum wage, Satpathy told this newspaper.

“Then the states will notify their minimum wages, which will increase workers’ wages and reduce the wage disparity among the states,” he said.

He said the micro, small and medium enterprises (MSME) — collectively the largest employment provider — might struggle to pay the new minimum wage and that its implementation in the farm sector was uncertain too.

“I’m not optimistic about the implementation of the minimum wage in the MSME sector, which is reeling under the Covid-19 crisis,” he said.

Sundar said he expected the national minimum wage to be between Rs 220 and Rs 240 a day. Since many states now prescribe minimum wages above the current floor-level wage, he hoped the new minimum wage would be above Rs 250 a day in most states.

However, he said, whether the minimum wage is implemented in the farm sector —where wages tend to be low and documentation absent — would depend on the procurement process and selling price of the rabi crop.

“How much the farmers are paid for their rabi crop will decide whether the minimum wage is paid to the farm labourers,” Sundar said.

“A higher minimum support price and organised procurement, and good prices in the markets” will improve the possibility of farm hands being paid the minimum wage, he said.

Sundar said the provision for getting private employers to set up a re-skilling fund to help employees upgrade their skills –— a part of the pending Industrial Relations Code —should be transferred to the pending Social Security Code Bill, which too is pending in Parliament.