Professionals pointed out that the pass system goes against medical ethics 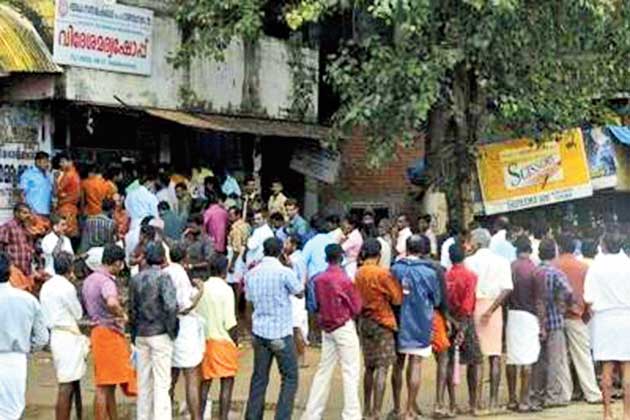 Rationed liquor will be delivered to the homes of those with certified withdrawal symptoms in Kerala, the government has announced, drawing flak from doctors in a state where six alcoholics have committed suicide since the lockdown kicked in.

The Kerala government was compelled to take the uncommon decision after the suicides became a talking point and the figures came to be compared with the Covid-19 death toll of two. Besides, spurious liquor, which had taken a heavy toll of lives in the past, had begun to make its presence felt since the lockdown.

But medical professionals have pointed out that the liquor pass system goes against medical ethics and poses an impediment to the battle against the coronavirus pandemic.

Forced to address the issue in the middle of the virus fight, chief minister Pinarayi Vijayan said on Tuesday evening that the government was not forcing doctors to issue certificates to alcoholics and that no action would be taken against them for not writing such prescriptions.

The Kerala Government Medical Officers’ Association, to which all government doctors in the state are affiliated, will mark Wednesday as a “black day” by wearing black ribbons to protest the government’s decision.

According to a government notification, an applicant for a liquor pass will first need to go to a government hospital as an out-patient and meet a serving government allopath, the only class of doctors who will be allowed to issue the prescriptions certifying that a person has withdrawal symptoms.

On the basis of such certificates, liquor passes will be issued by the government, making a person eligible for home delivery of alcohol from the government’s warehouses during the period of the lockdown.

The excise department has made it clear that only certificates from serving government allopathic doctors will be accepted.

According to the government notification, it will suffice if doctors only write “withdrawal symptoms”. But since that would not help determine the dose, the excise department has limited the supply to three litres of alcohol a week per person.

Many tipplers had got ayurvedic doctors and private practitioners to certify that they required liquor. One such prescription circulating on social media was issued by an ayurved practitioner who prescribed “VSOP Brandy 60ml+soda — three times in the evening with roasted peanuts.”

A mobile phone number provided on the prescription was found switched off when this newspaper tried to check its authenticity.

The Meghalaya government too has launched a similar scheme, prompting some doctors to point out that medical practitioners are supposed to prescribe medicines to alcoholics to fight withdrawal symptoms, not give them the licence to drink further.

Besides suicides, a reason to allow some concession to alcoholics in Kerala was the daily seizure of spurious alcohol since liquor stores closed on March 25 as part of the lockdown.

The state excise department has seized 6,700 litres of spurious liquor in just five days till Monday. Since spurious liquor could create another healthcare crisis, the government was left with no choice but to issue liquor passes.

Several government doctors said such an exercise would belittle their profession.

“We are doctors and hence not licensing authorities for someone’s quota of liquor,” Dr G.S. Vijayakrishnan, the general secretary of the KGMOA, told The Telegraph on Tuesday.

“As a doctor I would advise alcoholics to get de-addiction treatment, which is available everywhere. We cannot advise an alcoholic to go and have a few drinks as a remedy to his withdrawal symptoms,” Vijayakrishnan said.

“As it is, government doctors are hard pressed because of the rising cases of coronavirus. It would make things worse if applicants for liquor passes flood the OPDs,” he said.

The possibility of a rush to doctors to issue such certificates has also caused worries. “Not everyone would have withdrawal symptoms. I am sure many people will misuse such a facility just to get their drink,” Vijayakrishnan said.

One major hurdle before the excise department is checking the authenticity of the prescriptions. Many fear that people could come up with fake prescriptions, rubber stamps and signatures.

Since there are hundreds of doctors across Kerala’s government hospitals, it will be impossible to check each prescription.

The Kerala State Beverages Corporation, the sole distributor of liquor in the state, will deliver liquor to the homes of those cleared by doctors. Its MD, Sparjan Kumar, said on Tuesday that 30 liquor parcels were ready for delivery but would not be dispatched immediately as the first of every month was a dry day in Kerala.