Rahul said an India-specific approach should be drawn up, given the vastness and complexities of the country 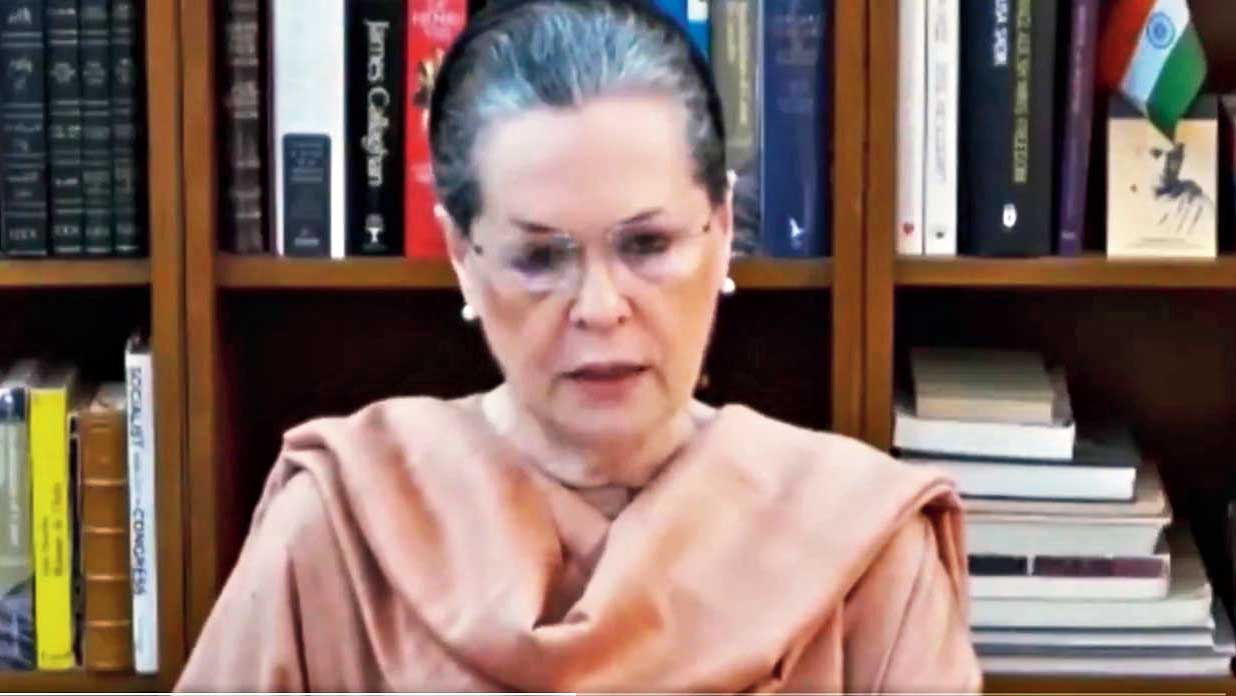 The Congress Working Committee (CWC) on Thursday expressed deep concern over the miseries caused to the poor by the unplanned lockdown, demanded adequate safeguards for health workers as well as extensive testing of suspected coronavirus patients and asked the government to work without any class, caste or religious biases.

“The 21-day national lockdown may have been necessary but the unplanned manner in which it has been implemented has caused chaos and pain in the lives of millions of migrant workers all over India. It has been heart-breaking to see lakhs of people walking for hundreds of kilometres towards their villages without food or shelter. It is the duty of us all to do our utmost to lessen their suffering,” Congress president Sonia Gandhi told the CWC meeting, held for the first time through video-conferencing.

The CWC resolution said: “Regrettably, the government has miserably failed to provide adequate livelihood support to the poor. The Financial Action Plan I announced on 25 March 2020 was miserly, hopelessly inadequate and left out several vulnerable sections of the people. It failed to instil confidence in the poor and, as a result, we witnessed the tragic spectacle of thousands of migrant workers desperately trying to go back to their village. That spectacle will forever remain a blot on the Modi government.”

Stressing the importance of communication, Sonia said: “I urge the government to prepare and publish a Common Minimum Relief Programme. This is vital and will help alleviate several of the concerns that currently afflict all people. The government should also publish and make available details of designated hospitals, number of beds, quarantine and testing facilities, as well as information regarding the availability of medical supplies to the general public.”

As an attempt has been made by some quarters to give a communal twist to the gigantic health and humanitarian crisis, fuelled by a section of media, Sonia said: “Covid-19 does not differentiate between political ideology, religion, caste, age or gender. The choices we make today will have a direct impact tomorrow on our family, neighbourhood, community, environment and nation. How effectively we meet this challenge, how we protect all sections of our society, specially the most vulnerable among us will define us for generations to come. Only if we act together in solidarity, will we overcome.”

Contending that the onus of readying the infrastructure lay on the governments, she added: “As far as the Covid-19 virus is concerned, there is no alternative to constant and reliable testing. This is the most effective way to combat it. Our doctors, nurses, and health workers need all the support possible. Personal Protection Equipment such as hazmat suits, N-95 masks, etc. must be provided to them on a war footing. Equally important are ventilators and breathing equipment, isolation beds and designated hospitals to treat Covid-19.”

Rahul Gandhi said an India-specific approach should be drawn up, given the vastness and complexities of the country. “We talked to experts since February. No country in the world has attempted a lockdown with huge migrant labour without arranging for their stay, food and ration. The Congress will have to act as watchdog and party workers should do whatever possible to mitigate the problems of the poor.The country will also have to prepare for economic devastation.” Rahul said.

P. Chidambaram lamented that the Centre had not completely understood the enormity of the crisis and asked the party to point out the shortcomings while extending support and cooperation to the government. He iterated the need for a larger financial aid package, of Rs 5 lakh crore, without any further delay.

Ahmed Patel said the Congress should not shy away from raising the people’s concerns and giving constructive suggestions to the government.

Priyanka Gandhi highlighted the sufferings of the poor who had to walk hundreds of miles to reach their villages while grappling with hunger and police brutality. She pointed out how the administration sprayed insecticides on the poor migrants.

Priyanka flagged financial woes of the poor, including payment of school fees for the children.

Congress chief ministers gave details of the preparations in their states while complaining about insufficient central support. They were particularly upset because the GST share worth thousands of crore had not been released by the central government.

The resolution passed at the meeting demanded significant scaling-up in testing, restoration of supply chains, arrangement for harvesting and procurement of new crop and measures to check the economic slide.

It said: “Resources for the plan can be found within the country and largely within the expenditure budgets of the central and state governments for 2020-21.”

The resolution added: “The government should immediately appoint an economic task force consisting of world-renowned economists to suggest three plans: (1) an emergency plan within one week; (2) a short — to medium-term plan within one month; and (3) a medium — to long-term plan within three months in order to protect and revive the economy.”