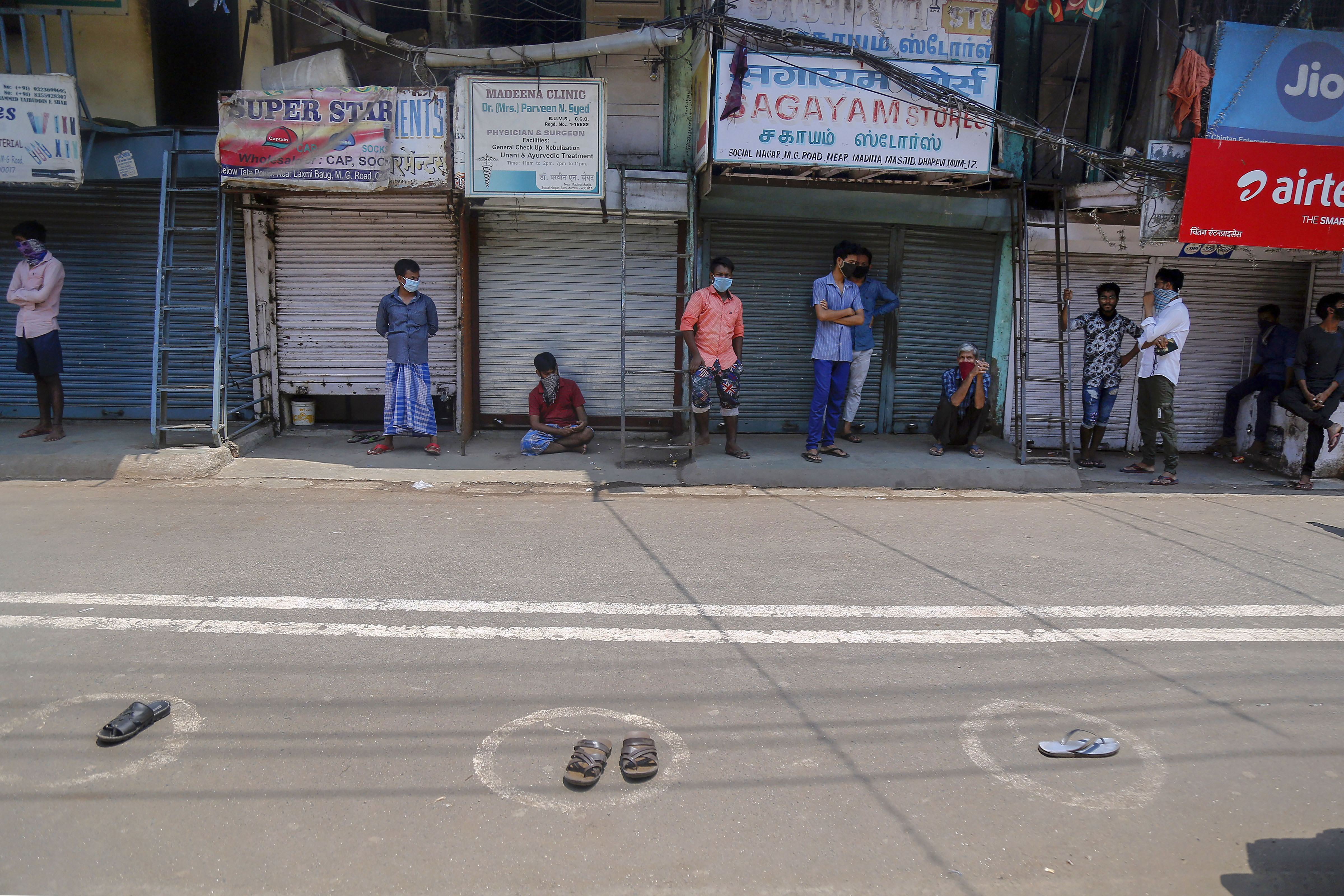 Migrant workers put their footwear in painted circles as they stand in shade to collect food during a nationwide lockdown in the wake of coronavirus pandemic, at Dharavi in Mumbai, Sunday, April 19, 2020.
PTI
Our Bureau   |   New Delhi   |   Published 20.04.20, 11:17 AM

After much criticism, states have finally turned their attention to their own, the migrant workers who are stuck hundreds of miles away from their homes.

While Delhi and Uttar Pradesh governments decided to provide buses, several chief ministers, including those of Bengal and Odisha, have announced cash transfer schemes.

Mamata Banerjee promised monetary help to stranded migrants of Bengal, saying their local contacts in Maharashtra, Gujarat and Delhi would be used for payment of “pocket money”. She also wrote to chief ministers of 18 states and sought their intervention.

“Since it is not possible for us to provide any help to them, I take the opportunity to request you to kindly ask your administration to provide them with basic shelter, food and medical support during this period of crisis,” Banerjee wrote.

Three states – Bihar, Jharkhand and Uttar Pradesh – which make up for the majority of migrant workers stranded across the country also announced cash transfers.

Newly formed Stranded Workers Action Network (SWAN), a group of volunteers that coordinates and provides relief, published a report on the impact of the lockdown after collecting information from nearly 12,000 migrant workers stranded in various states.

SWAN member Rajendran Narayanan said cash transfer schemes launched by the Bihar government did reach some migrants who had bank accounts within the state.

The Jharkhand government, he said, was to launch a cash transfer scheme too.

The Uttar Pradesh government had also assured workers cash transfers of Rs 1,000 but Narayanan said their volunteers had not come across beneficiaries.

“UP sent buses to get a bunch of students and Gujarat did something similar. But as far as workers are concerned there has been gross negligence by states to bring them back,” said Narayanan, who teaches at Azim Premji University.

The plight of stranded migrants came to the fore soon after a 21-day nationwide lockdown came into force from March 25. Images of hundreds of migrants walking back to their homes were all over newspapers and television channels.

Delhi and Uttar Pradesh governments’ hasty decision to provide buses to ferry the stranded home made a mockery of social distancing norms that were sought to be imposed. A crowd of thousands landed up at Anand Vihar bus station on the Delhi-UP border in the hope of getting transport.

Images of migrant labourers on foot, cycles and push-carts, with their children in tow, were published all over. Yet the state governments seemed out of their depths to manage the crisis.

With the extension of the lockdown last week, there was a similar rush of migrants. A huge gathering outside Bandra railway station in Mumbai forced several states to re-initiate measures.

According to SWAN’s report, most of migrants were stranded in Maharashtra and Karnataka, followed by UP, Delhi, Haryana and Punjab. “Roughly 79 per cent of them were daily wage factory/construction workers,” the report said.

On April 7, while hearing a petition jointly filed by civil liberties activists Harsh Mander and Anjali Bharadwaj seeking payment of wages to migrant workers who were left with no income, Chief Justice S.A. Bobde asked advocate Prashant Bhushan, “If they are being provided meals, then why do they need money for meals?” during a brief hearing.

States like Delhi and Haryana have since been commended for putting up an effort to provide cooked meals to the stranded workers. After its initial inaction, the Delhi government moved several stranded workers to schools turned into shelter homes. But its efforts weren’t enough.

Days ago, hundreds of migrant workers were found living under a bridge and starving after the Delhi administration was accused of turning them away for allegedly setting shelter homes on fire.

Providing dry rations to the stranded has also been a challenge, especially in states like UP and Maharashtra where most people have not received any help from the government.

“In terms of how quickly support reaches, Delhi, Haryana and Karnataka have been good. In these states it has been easier to reach government officials and the right channels to get relief,” said Sakina Dhorajiwala of SWAN. She, however, noted that some state governments, like in Maharashtra and UP, were very unresponsive.