Congress taps surgical strike general to work on its vision 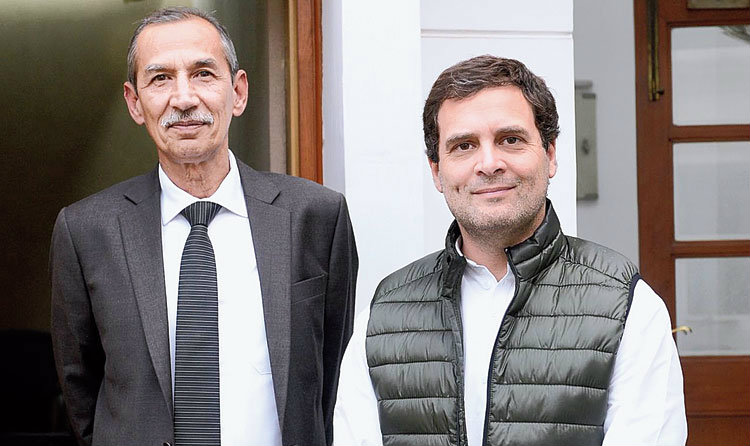 Congress president Rahul Gandhi has asked Lt Gen. (retired) D.S. Hooda of surgical-strike fame to draft a vision document on national security to be presented before the general election.

Rahul met Lt Gen. Hooda on Thursday to discuss the plan. The party later announced that a task force of select experts, led by Hooda, would be set up to prepare the vision document.

This is a coup of sorts as the heavily decorated soldier had been heading the Northern Command of the Indian Army when the much-publicised surgical strike took place across the border in September 2016.

Rahul’s decision reflects a clear understanding of the future political discourse in which national security is bound to play a critical role.

With the Opposition succeeding in communicating that the Narendra Modi government had failed to usher in the promised achchhe din — with agrarian distress and employment crisis at an alarming level — the Congress leadership had expected the BJP to attempt to dramatically alter the electoral narrative.

With the Pulwama attack and the muscle-flexing that followed, national security now overrides other concerns. The Congress is gearing up with a counter-narrative, primarily with a two-pronged approach of exposing Modi’s failure on the issue and offering a concrete security plan.

The party has already prepared blueprints for solutions to the farm and job crises, in addition to dealing with the overarching issue of poverty with a minimum guarantee scheme, and now a vision document on security will complete the circle.

Hooda’s association with the Congress will give a new dimension to the surgical strike discourse. The general, who had served on the northern and eastern borders during his four-decade career in the army, had criticised the hype and politicisation of the surgical strike that he had planned and overseen. The BJP has exploited the operation to the hilt, presenting it as a trophy won out of its robust military policy.

Hooda had earlier said: “The initial euphoria over the success of the surgical strike was natural but the constant hype around it is unwarranted. I do think there was too much hype over it. The military operation was important and we had to do it. Now how much should it have been politicised, whether it is right or wrong is something that should be asked to politicians.” He had planned the operation by special forces in less than two weeks after the Uri attack.

Many security experts and retired army generals had supported Hooda’s views and advocated greater secrecy around such operations. The officer has frequently stressed the need for political initiatives to resolve the Kashmir problem. His views are not in tune with the BJP’s jingoistic hyperbole.

Even on the Pulwama attack, Hooda told the Associated Press last Saturday that while “some kind of limited (military) strike (against Pakistan) is more than likely”, he hoped for “rethinking and reconciliation” from all sides in the conflict.

Considering the state of affairs in Kashmir, Hooda said, he was not surprised that the attack had taken place. “I just hope this all leads to some introspection, some deep thinking and engagement to do everything afresh and rethink what we all should be doing to settle issues once for all,” he said.