Advertisement
Home / India / Congress: Are we free to speak, ask, disagree?
Party slams govt for 'lack of courage' on China

Congress: Are we free to speak, ask, disagree?

Party slams govt for ‘lack of courage’ on China, ‘fake nationalism’ and state of economy 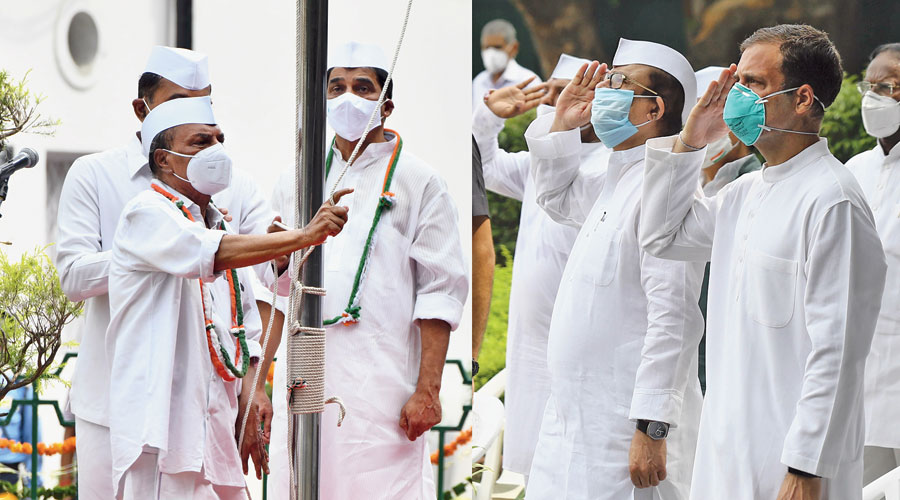 Rahul Gandhi and other Congress leaders salute as party senior AK Antony hoists the Tricolor during the Independence Day celebrations at the AICC headquarters in New Delhi on Saturday.
Picture by Prem Singh
Sanjay K. Jha   |   New Delhi   |   Published 16.08.20, 01:02 AM

Prime Minister Narendra Modi’s emphasis in his Independence Day speech on making the country self-reliant has not impressed the principal Opposition party Congress, which has focused instead on what it sees as an assault on the defining principles of democracy.

Arguing that self-reliance has been an eternal quest that every government has worked for since the nation-building process began after Independence, Congress leaders insisted that the greatest necessity today is to protect the foundational principles such as equality, justice and freedom that have come under severe attack.

The Congress also contrasted its role in the freedom struggle with the RSS-BJP’s “fake nationalism”, striking at the heart of the saffron camp’s nationalism plank and its tendency to brand any opposition as anti-national.

As India celebrated its Independence Day, the Congress exhorted the people to take a vow to collectively save citizens’ fundamental rights and constitutional values.

Rahul Gandhi’s tweet wishing the people on Independence Day indicated what was gnawing at the Congress’s mind: ‘“The only alternative to coexistence is co-destruction.’ Jawaharlal Nehru.”

While the former Congress president has been relentlessly attacking Prime Minister Modi for the past few months over the economic mess and the Chinese intrusions, Saturday’s tweet betrays his worries about the impact of toxic communalism on the social fabric.

Congress president Sonia Gandhi said in her Independence Day message: “It appears the government is standing against democracy, constitutional norms and established traditions. These are testing times for India’s democracy. Every Indian needs to introspect what freedom means. In today’s India, is there freedom to write, to speak, to ask questions, to disagree, to express opinion, to seek accountability?”

After the flag-hoisting ceremony at the Congress headquarters, party communications chief Randeep Surjewala said: “Is the government committed to protect our freedoms? Does this government have faith in democracy, does it respect the people’s mandate? We see encroachment on individual rights everywhere…. And a government that is planning to sell India’s 32 public sector units — from the railways to airports, from LIC to FCI, can they make us atmanirbhar (self-reliant)?”

The Congress also launched a social media campaign to create awareness about the freedom movement and the foundational values of Indian democracy.

A video series called Dharohar (Legacy) was unveiled by Rahul, stressing how freedom was achieved through great struggle and sacrifice; and the social, political and constitutional values that evolved during the course of the greatest movement to create a modern nation-state.

Through the campaign, the Congress is seeking to remind the younger generation, which has been fed the propaganda that nothing happened before Modi’s arrival on the national scene in 2014, of its glorious legacy.

The Congress’s failure to counter that narrative, which also helped the RSS-BJP to usurp the nationalist plank, has been one of the key reasons for its continued electoral decline. Modi returned with a bigger mandate in 2019 primarily riding on the tension with Pakistan, with the Balakot air strike bolstering the BJP’s nationalist pitch.

The Congress is finally waking up to confront the BJP on this critical factor. It has asserted that only the “fake nationalism” of the RSS brand can describe as unpatriotic raising questions on fundamental issues such as the economy, jobs, people’s welfare and territorial integrity. Many Congress spokespersons posted videos saying the time had come to expose the RSS-BJP’s “fake nationalism” and wondered who gave them the authority to issue certificates of patriotism.

While the Congress ran a social media campaign on the BJP’s “fake nationalism” on the eve of Independence Day, Rahul sought to drag the Prime Minister back to the Chinese incursions, arguing that India would have to pay a heavy price for Modi’s lack of courage.

The Congress leader tweeted on Friday night: “The Government of India is scared to face up to Chinese intentions in Ladakh. Evidence on the ground indicates that China is preparing and positioning itself. The Prime Minister’s personal lack of courage and the media’s silence will result in India paying a huge price.”

Modi, however, avoided naming China in his Independence Day speech, only saying: “From LoC to LAC, whoever has tried to challenge the country’s sovereignty, the country and its forces have given a befitting reply to them.”

While the LAC (Line of Actual Control) was a reference to China, he also spoke against expansionism again. This was in sharp contrast to Modi’s usual bellicose public posturing on Pakistan — defined by his “ghar mein ghus ke mara” claim — but he appeared satisfied with the situation, saying the world had seen what India could do to protect its sovereignty. It is not clear what retaliatory action the Prime Minister was referring to.

Congress spokesperson Manish Tewari responded: “China has occupied our territory. The Prime Minister of India does not have the courage to name China. What kind of a leader is he??? On Independence Day people must rise to protect our independence.”

Sonia also said in her message that the best tribute to the Indian soldiers who died in the Ladakh clash would be to throw out the Chinese from Indian territory.

The BJP has condemned Rahul’s sustained grilling on China as anti-national. Congress spokesperson Supriya Shrinate said in a video message: “How come anybody asking questions about jobs, economy, China… become anti-national? Whatever you say, the BJP will either brand you a traitor or a fake nationalist. Who gave them the certificate to assess our patriotism? When the Congress was fighting the British, they were siding with them, writing mercy petitions, promising not to join the Congress struggle.”

Shrinate added: “We want to ask how most attacks on our borders happen during the BJP’s rule — Kargil, Doklam, Ladakh? Modi goes to Pakistan to celebrate Nawaz Sharif’s birthday, calls the ISI to the Pathankot airbase and remains a nationalist. And all others who ask questions are anti-national.”

Alleging that the RSS had been dancing to the tune of the British when the Congress was fighting them, another party spokesperson, Ragini Nayak, said: “They burnt copies of India’s Constitution, refused to hoist the Tricolour for 52 years and distributed sweets after Mahatma Gandhi’s assassination. What kind of nationalism is this?”

Echoing the allegation that the RSS had no role in the freedom struggle, senior Congress leader Mohan Prakash asked: “Is selling public sector units like the LIC, BPCL, BSNL and the railways a patriotic act?”

The Congress posted several messages, videos and graphics pointing out that “true nationalism was reflected when the Congress built India — world-class institutions, telecom, milk and green revolutions, the world’s largest army and robust economic growth. Toppling governments, muzzling the voice of the people, selling national assets is not patriotic”. The Congress also explained how the BJP had delivered the highest unemployment rate since Independence, the lowest GDP growth rate, publicity stunts and fake news during its six-year rule.