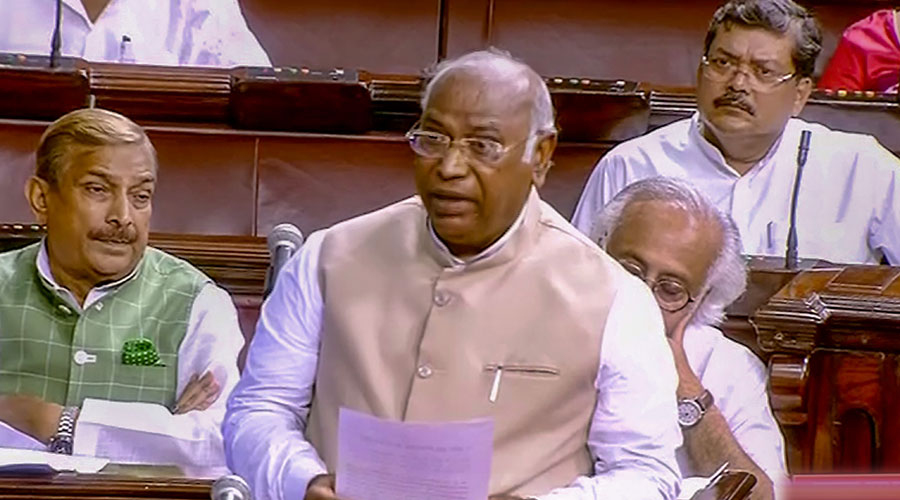 The Congress on Monday termed the Enforcement Directorate summons to Leader of Opposition in Rajya Sabha Mallikarjun Kharge as an "outright affront" to Parliament and MPs, and said it is high time that presiding officers of both Houses ensure that it does not recur.

Last week, on Thursday, the Enforcement Directorate had asked Kharge to appear before it in connection with a money laundering case linked to the National Herald newspaper.

In a statement, Congress general secretary Jairam Ramesh charged that the ED summons to Kharge when Parliament session was on was done with the sole purpose of harassing the Leader of Opposition (LOP) and the Congress.

He said this exercise of conducting a search at the office of the Young Indian by the ED could very well have been conducted in the presence of counsel authorised by the LOP for the purpose.

However, the ED did not accede to this request and insisted on his presence.

Ramesh said even though the House was in session, the LOP adhered to the summons and accordingly went to the Young Indian office in which premises he was required to be present for more than eight hours.

"Notwithstanding this fact, in matters, issuing of summons by ED or any law-enforcing agencies to any MP much less the Leader of Opposition when Parliament is in session, is an outright affront to the sacred institution of Parliament and Parliamentarians," he said.

"Under the circumstances, in keeping with the sanctity of Parliament and Parliamentarians and its time-honoured conventions, it is high time that the presiding officers of both Houses may deliberate and ensure that such gross affronts on Parliament and MPs does not recur," Ramesh said in the statement.

The Congress leader also referred to the August 5 observation made by the Rajya Sabha chairman, the thrust of which was that Parliamentary privileges are not available in criminal cases.

Ramesh said there is no dispute whatsoever on the well-established position that privileges are not available in criminal cases, but noted that in the National Herald case, the LOP is not the accused.

He also drew attention to Rule 229 of the Rules of Procedure and Conduct of Business in Lok Sabha and Rule 222A of Rules of Procedure and Conduct of Business in Rajya Sabha provisions of which require that whenever a Member of Parliament is arrested on a criminal charge or for criminal offence or is sentenced to imprisonment or is detained under an executive order, the committing judge, magistrate or executive authority, an intimation has to be immediately sent to Speaker Lok Sabha or Chairman Rajya Sabha as the case may be.

"The legislative intent behind these provisions is that the House has a right to be informed as to why a member is not able to attend sitting of the House concerned, reason being no obstruction is caused to a Member of Parliament in performance of his/her Parliamentary duties unless and until there are sufficient reasons meaning thereby their detention under a criminal case," Ramesh said.