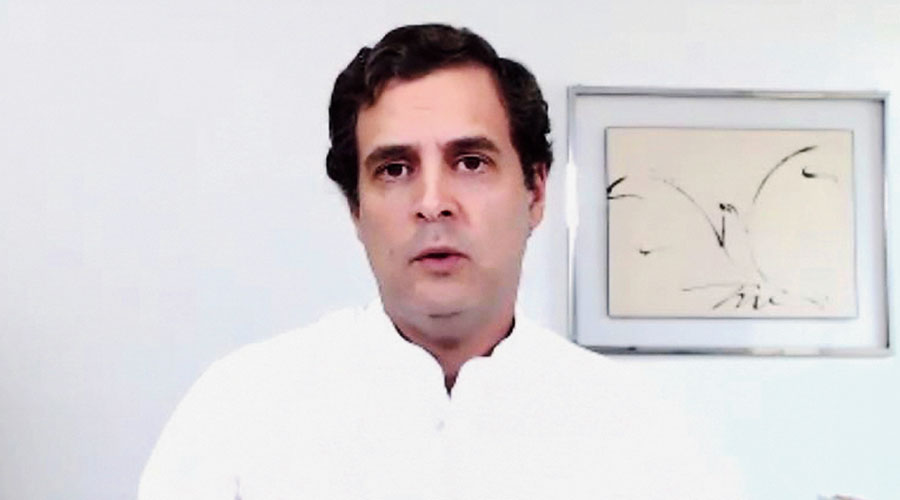 The Congress on Thursday asked the government to provide Rs 6,000 for the next 12 months to every poor family and unemployed youth, raising the bar way above anything the Narendra Modi government has doled out till now.

The demand came amid reports that suggested the government was planning a second stimulus package as its much-hyped Rs 20-lakh-crore intervention earlier in the summer had failed to address the economic crisis, having contained little to boost demand.

The Congress had emphatically rejected the package, saying it was just a “loan mela (fair)” and that the real stimulus it contained was less than 1 per cent of the GDP rather than the professed 10 per cent.

Rahul Gandhi on Thursday accused the government of having ignored every good suggestion from the Congress and dragging the economy into a mess.

“When I said in February before the corona(virus) struck that a tsunami is going to come, the government made fun of me,” he said in a video message.

“When the crisis struck, I gave three suggestions. 1. Put money into the accounts of every poor person, on the lines of the Nyay (minimum income guarantee) scheme we had proposed (before the 2019 general election). 2. Help the MSMEs (micro, small and medium enterprises) which are our backbone and the future of our youth. 3. Protect our strategic industries.”

Rahul added: “Modi did nothing. Kuchh nahin kiya. Instead, he gave tax relief and loan waivers to 15-20 corporate friends. Today I want to tell the Prime Minister again, ‘You have destroyed India’s economy and our youth’s future. Even today, you can salvage the situation by doing three things: Put money directly into the accounts of the poor, help the MSMEs and stop handing over our public-sector companies to your friends. And why have you fallen silent? Why don’t you speak on economy and China? Please say something; the country is eager to listen to you’.”

Rahul was participating in an online campaign on job losses a day after party workers had held candlelight marches in many cities to stress the issue.

Congress leaders from across the country posted videos explaining the gravity of the situation. They accused Modi of fuelling the crisis through wrong policies — from the November 2016 demonetisation to the unplanned lockdown — and regretted that the government still preferred to divert the nation’s attention with irrelevant issues.

They asked the jobless youth to speak out and alleged the government’s policies had destroyed existing jobs instead of fulfilling its promise of creating two crore jobs every year.

While some alleged that 14 crore jobs had been destroyed in the past six years, others underlined that nearly 2 crore salaried employees had lost their jobs during the lockdown alone.

They all repeated the demand for the Rs 6,000-a-year relief, with former finance minister P. Chidambaram underscoring that it would far outstrip anything the government had handed out so far.

“How much did each beneficiary get under the PM Garib Kalyan Yojana? Was it relief in any real sense or tokenism?”  Chidambaram tweeted.

“Migrants (2.66 crore) got 2.67 lakh MT of food grains over 2 months. That is 5 kg per month. Could it have sustained a migrant and his family? The numbers prove that the money given was niggardly and totally insufficient. And certainly, the money could not have acted as a ‘stimulus’ to boost demand and revive the economy.”