Over 8,000 participants ran 5km, starting from and returning to the Muktakashi Manch ground in the city, located in backward Bundelkhand 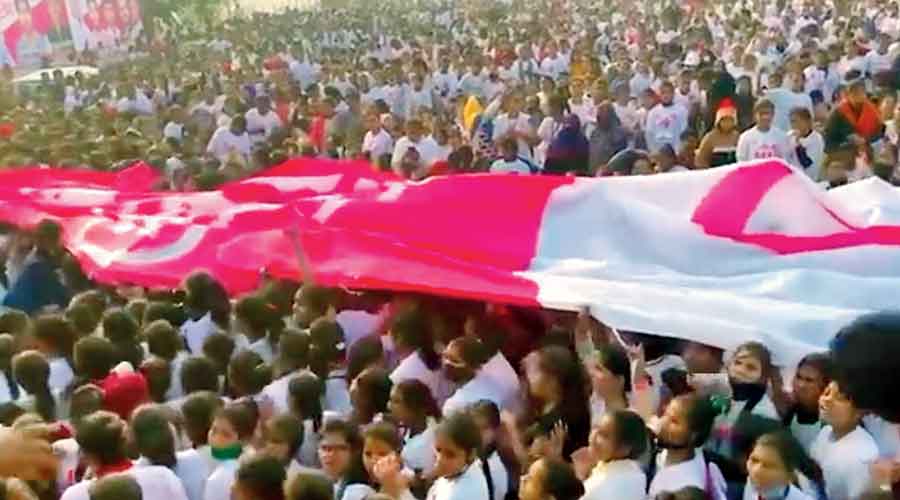 The Congress organised a women’s “mini-marathon” in Jhansi on Sunday and claimed 10,000 participants, looking to send out a signal that Priyanka Gandhi Vadra had been able to build enthusiasm with her women-centric campaign in the run-up to the Assembly elections.

The Yogi Adityanath government too seemed to unwittingly project the same message, preventing a similar Congress event in Lucknow at the eleventh hour citing a selectively enforced ban on assemblies and the Covid protocol.

In Jhansi, a police officer said that over 8,000 women and girls had participated in what the Congress had named a “Run for Manikarnika Mini-Marathon” after local icon and freedom fighter Rani Lakshmibai aka Manikarnika. The participants ran 5km, starting from and returning to the Muktakashi Manch ground in the city, located in backward Bundelkhand.

Most of the participants on Sunday were college students, sources said.

“We saw posters advertising the mini-marathon and came here on our own. We need to assert our presence,” Madhvi Singh, a participant, told reporters.

Several of the participants, who appeared to be associated with the Congress, chanted “Ladki hun, lad sakti hun (I am a girl and can fight)”, a slogan Priyanka has coined to encourage women to contest elections.

Priyanka has announced that the Congress would give 40 per cent of its tickets to women in the Uttar Pradesh Assembly elections, due in March. She has also promised reservation for women in government jobs if the Congress is elected to power.

While the Congress gave away a scooty as first prize, the next 25 finishers received a smart phone each. The next 100 got fitness bands. All the participants got a round-necked, white T-shirt and a certificate.

Some of the women chanted “Priyanka Gandhi zindabad” and “Jai Hind” at the end of the marathon.

The Congress has planned all-women mini-marathons in different cities of Uttar Pradesh every Sunday. On December 19, the first day, the event was held in a couple of cities including Meerut, which witnessed participation by about 2,000 women.

On December 26, the event was planned in Jhansi and the state capital. But Lucknow police blocked the mini-marathon at 8am, an hour before it was to be flagged off by actress Mandira Bedi and Congress leader Rajiv Shukla, although over 600 women had already gathered at the starting point, the 1090 Crossing.

Police commissioner D.K. Thakur said assemblies of more than four people had been banned in the city to avert law-and-order problems and the flouting of the Covid protocol during Christmas and New Year festivities.

Section 144 of the CrPC has indeed been in force in Lucknow for the past 10 days but the police have been selective in implementing it on the ground, allowing government and BJP events and even informal private gatherings.

Pooja Kumari, a resident of Mohanlalganj in Lucknow district who had arrived on a scooter to participate in the 5km run, slammed the state authorities.

“The Congress general secretary (Priyanka) has been trying to bring women onto the centre-stage of politics and the mainstream of life, and I came here mostly because I wanted to run for the cause,” she said.

“Unfortunately, the state government looked at it through a political prism. Such actions are going to harm the BJP, which is already known for pushing women backwards. The RSS is essentially anti-women, which is why they replaced the traditional greeting of ‘Jai Siya Ram’ with the ‘Jai Shri Ram’ slogan.”

She added: “Priyanka is giving us importance but other political parties are using us for our votes.”

Congress leader Surpriya Shrinate said: “The Yogi Adityanath government fears the way Priyanka Gandhi is attracting women. This is why it didn’t allow our programme in Lucknow.

“However, Yogi himself held a mass gathering at Lucknow’s Ekana Stadium on Saturday to distribute tablets and smart phones. Defence minister Rajnath Singh and the chief minister addressed a gathering in the city after Rajnath laid the foundation for a DRDO laboratory today.”

Shrinate added: “The tourism department had organised its annual marathon at the 1090 Crossing in the heart of the city a few days ago, but our all-women marathon was banned.”

Congress workers organised a dharna at the gates of the police commissioner’s bungalow in Sapru Marg to protest the blocking of the party’s mini-marathon.

Priyanka has been organising all-women meetings across the state for the past one month. Political analysts believe that it was her success in attracting women that had prompted Prime Minister Narendra Modi to address an all-women meeting in Allahabad on December 21.

However, Modi’s was an official programme to which members of self-help groups were brought from across the state in buses hired by the state government, which distributed saris among them. Funds were transferred to the self-help groups too.

“I believe that most women cannot be lured through a sari or cash. They need social and political empowerment, which the Congress general secretary is promising them,” said Pragya Kumari, a would-be mini-marathon participant, at the 1090 Crossing.