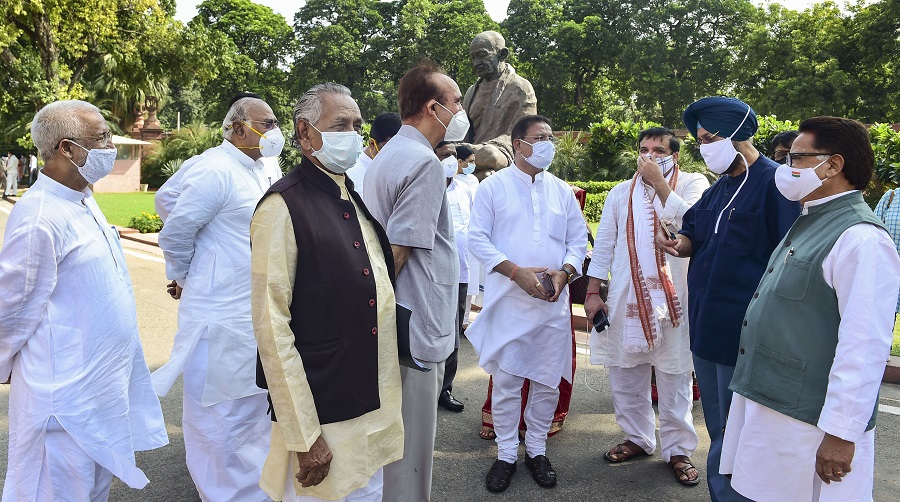 Several Opposition parties, led by the Congress, staged a walkout from Rajya Sabha on Tuesday, saying they would boycott the rest of the session unless the suspension of eight members were revoked.

Subsequently, the 8 suspended MPs ended their overnight sit-in inside Parliament House complex. "All the Opposition parties have boycotted the rest of the session (in Rajya Sabha), nobody is attending the session. They appealed to us to withdraw the dharma and since nobody is attending the session till the suspension is revoked, there is no point in continuing with the dharna," suspended Congress MP Nasir Hussain told PTI.

The Monsoon Session is scheduled to end on October 1.

The Congress was the first to walk out from the House along with members of the AAP, TMC and Left parties. The members of all the three parties are among those who have been suspended by the House for the remaining part of the monsoon session.

Some parties like the NCP, SP, Shiv Sena and RJD also staged a walkout later.

Earlier, leader of the Opposition Ghulam Nabi Azad said they would boycott the proceedings of the House till the suspension of eight members was revoked.

Speaking after the Zero Hour, Azad also demanded that the government bring a bill to ensure private players did not procure food grains below the minimum support price (MSP) fixed by the government.

He also asked the government that the MSP should be fixed from time to time as per the C2 Swaminathan formula.

You can suspend me.

You cannot silence me. #Parliament

The eight Opposition MPs, who were suspended on Monday and spent the night on the lawns near Mahatma Gandhi's statue, are: Rajeev Satav, Syed Nasir Hussain and Ripun Bora of the Congress, Derek O’Brien and Dola Sen of Trinamul Congress, Elamaram Kareem and K. K. Ragesh of the CPM and Sanjay Singh of AAP.

The morning began with Rajya Sabha Deputy Chairman Harivansh Singh choosing to meet the protesting MPs on the lawns and offering them tea. Prime Minister Narendra Modi described his gesture as proof of his greatness, but several Opposition MPs refused to have tea, maintaining all along that the deputy chairperson was in the wrong.

At least one the protesting MPs said Harivansh’s appearance with a posse of cameramen looked like a gimmick.

"To personally serve tea to those who attacked and insulted him a few days ago as well as those sitting on dharna shows that Shri Harivansh Ji has been blessed with a humble mind and a big heart. It shows his greatness. I join the people of India in congratulating Harivansh Ji," the Prime Minister tweeted.

AAP's Sanjay Singh tweeted a picture from the protest site in the morning, saying the "whole night was spent under the open sky in front of Bapu's statue". "The protest in favour of farmers' rights is continuing," he added.

To personally serve tea to those who attacked and insulted him a few days ago as well as those sitting on Dharna shows that Shri Harivansh Ji has been blessed with a humble mind and a big heart. It shows his greatness. I join the people of India in congratulating Harivansh Ji.

When the Rajya Sabha deputy chairman arrived, a senior MP told him to meet them without the cameras and sit with them.

"Another senior MP also told him that while bringing tea was a nice gesture, he was still in the wrong in what he did. He was told that he was the one who broke the rules," a protesting MP told PTI.

Several leaders said they did not accept the tea and snacks offered by the deputy chairman. "I did not have the tea brought by him," Sanjay Singh said.

Harivansh has been in the thick of things since the suspension drama unfolded. The eight MPs were suspended for the remaining part of the current session over their "misbehavior" with the deputy chairman during the passage of the farm Bills on Sunday.

After many Opposition parties have boycotted the remainder of the Monsoon Session of Rajya Sabha, the dharna at Gandhi statue has ended. Now we will take our fight for the rights of the farmers to every town and village in the country.

Later, Harivansh expressed his deep anguish and pain at the Opposition MPs’ "humiliating" conduct towards him and announced a 24-hour fast to inspire a feeling of "self-purification" in them.

In a letter to Rajya Sabha Chairperson M Venkaiah Naidu, Harivansh recounted the ruckus in the House on Sunday during the passage of the farm bills, and said members engaged in "violent" conduct in the name of democracy, tried to frighten the Chair and tore to shreds every norm and convention of the House.

This sight of "disrobing of democracy" jolted his mind and heart and he could not sleep for the whole night, the Bihar MP wrote in the letter underscoring his agony and pain at the development.

Whatever happened in front of me on September 20 has caused unimaginable loss to the dignity of House and Chair, he said.