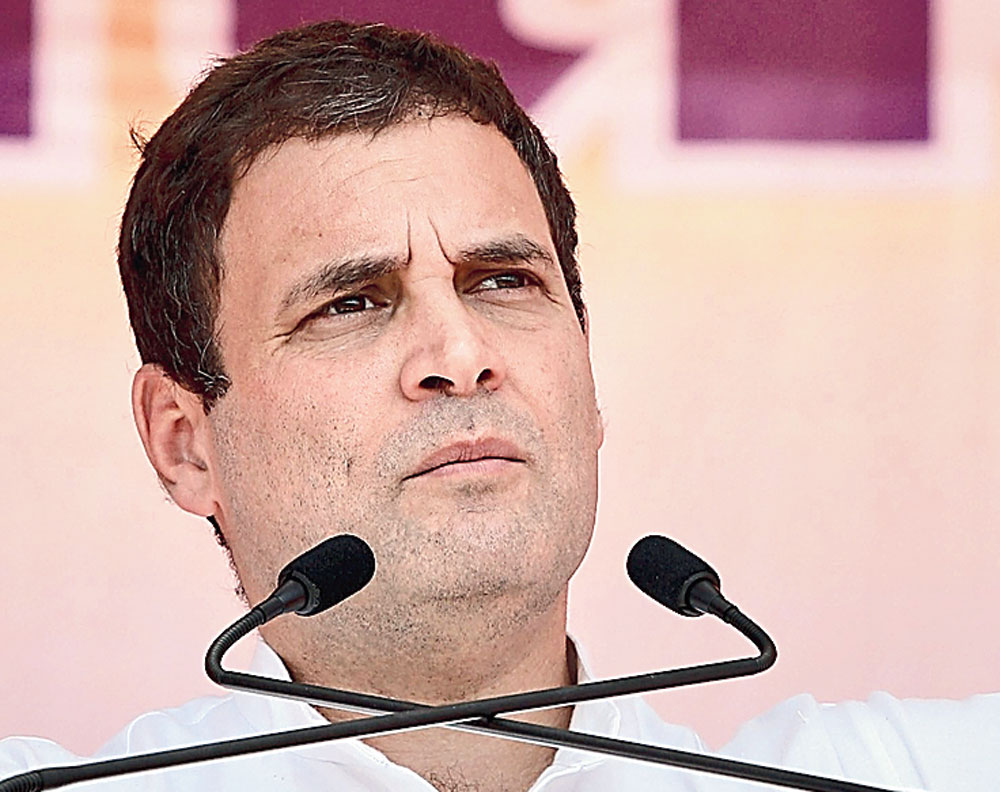 Rahul contended that it was shameful the Prime Minister did not consult the IAF before purchasing 36 fighter jets instead of the sanctioned 126.
Telegraph file picture
Our Bureau   |   New Delhi   |   Published 13.11.18, 09:35 PM

Congress spokesperson Manish Tewari has asked five questions on the basis of the affidavit filed by the Centre in the Supreme Court on the Rafale deal.

At four rallies in Chhattisgarh, where Assembly elections have begun, Congress president Rahul Gandhi continued to accuse the Prime Minister of wrongdoing on Rafale. “The Prime Minister is scared of any inquiry. Once the inquiry starts, two faces will clearly emerge — (Narendra) Modi and Anil Ambani.”

Rahul contended that it was shameful the Prime Minister did not consult the IAF before purchasing 36 fighter jets instead of the sanctioned 126.

The non-Congress Opposition also did not pull any punches.

Referring to Dassault chief Eric Trappier’s interview in which he defended the deal, CPM general secretary Sitaram Yechury said: “The Modi government has resorted to a web of lies to hide the corruption in the Rafale scam. Cronies of all kinds, from France to here in India, are out trying to defend the indefensible. But their lies have all been nailed.”

The questions that Trappier was answering ought to be answered by the Comptroller and Auditor General of India, the Supreme Court and the CBI, Yechury said. “Not the French CEO of a company making money on this deal or the PM — all of whom are complicit in the corruption,” he tweeted.

RJD spokesperson Manoj Jha tweeted: “You can’t simply make an ‘Arranged Marriage’ appear as ‘Love Marriage’…. When choice is ‘mediated beforehand’… it is no CHOICE. And Remember! ‘Skeletons’ have a very bad habit of coming out of ‘well-guarded cupboards’. Wait… Just wait.”

Samajwadi Party’s Ghanshyam Tiwari questioned the timing of the interview: “State of the Nation like Interview by Eric Trappier played on all news channels simultaneously just when deal is in question in the Supreme Court. The ex-President of France, the President of France, the Dassault CEO have spoken. Why is our Bahubali PM hiding? After all, he took the decision!”

The questions that Trappier was answering ought to be answered by the Comptroller and Auditor General of India, the Supreme Court and the CBI, Sitaram Yechury said.
Telegraph file picture