‘Embrace Gandhi’s definition, not Hitler’s, and you won’t have to disown it’ 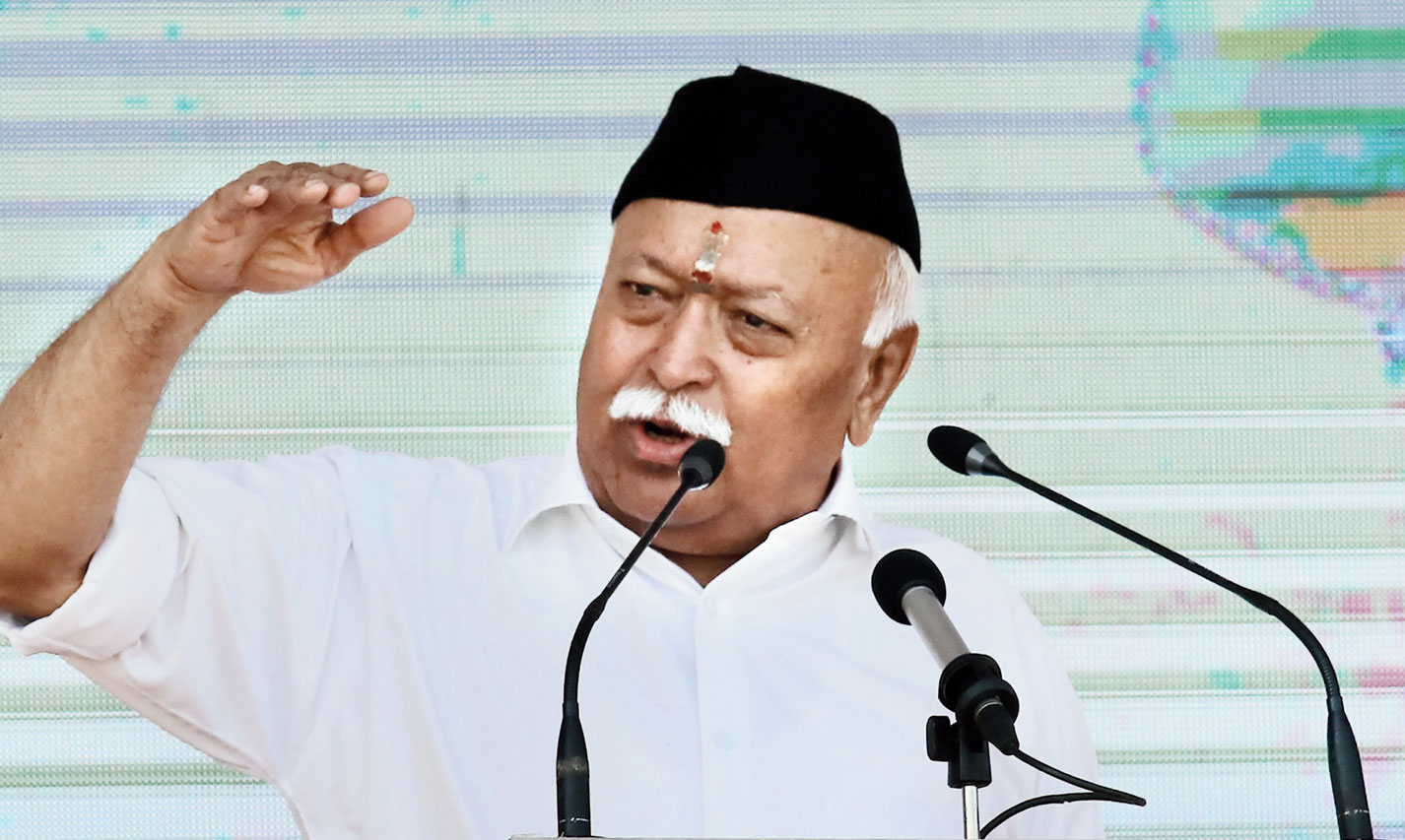 The Congress has said RSS chief Mohan Bhagwat is feeling compelled to distance the outfit from “nationalism” because the Sangh parivar subscribed to a flawed concept instead of embracing Mahatma Gandhi’s inclusive perspective.

Congress communication chief Randeep Surjewala issued a statement: “The Sangh Parivar now wants to abandon nationalism. Bhagwat is now limiting nationalism to Hitler, fascism. Had the RSS adopted Gandhi’s nationalism, they would not have felt the need to dissociate. They grabbed power using nationalism and now want to change. India’s nationalism is based on Gandhian philosophy; it is inclusive; it is based on love, equality and pluralism. It weaves solidarities. The RSS never understood that.”

The RSS has often been accused of drawing inspiration from the Nazi philosophy and based its definition of nationalism on territory, ethnicity and religion. In India, secular formations disapproved of the RSS for disowning “Indian nationalism” for “Hindu nationalism”. Bhagwat’s predecessors in the RSS have rarely shied away from showing admiration for Benito Mussolini and Adolf Hitler.

Although Bhagwat lamented that nationalism acquired a bad name owing to its link with fascism, RSS ideological mentor M.S. Golwalkar had written: “Race pride at its highest has been manifested in Germany. It has also shown how well-nigh impossible it is for races and cultures, having differences going to the root, to be assimilated into one united whole, a good lesson for us in Hindustan to learn and profit by.”

The Congress and the communists firmly believe that the RSS agenda to establish a “Hindu Rashtra” forced the organisation to recast nationalism and brought its political wings in direct conflict with the Gandhian philosophy and the values that emerged during the freedom movement.

The social and political manifestations of the RSS belief started affecting the national life only after the BJP came to power winning absolute majority and those holding contrarian views were condemned as anti-national. Nationalism is defined in India today primarily on the basis of political and religious loyalties.

Not only Bhagwat, even the secular intelligentsia has been fiercely debating nationalism post-2014.

In the midst of anti-national barbs and a flurry of sedition charges, historian Romila Thapar wrote: “Sovereignty resides with the nation and not with the government. National interest meant ensuring that every citizen lived with dignity. This required both economic growth and social justice as fundamental to the establishing of a nation. It cannot be reduced to merely waving flags and shouting slogans, and penalizing people for not shouting slogans.”

Thapar added: “Nationalism requires a far greater commitment to attending to the needs of the nation rather than sloganeering. Nationalism as it evolved historically was inclusive and drew on the idea of the unification of diverse groups to form a new community of citizens. Concepts of nations based on a single exclusive identity — religious, linguistic, ethnic, and similar single identities are actually pseudo nationalisms.”

There lies the rub: The RSS refused to define nationalism in the light of constitutionalism and citizenry. Hindutva ideologue V.D. Savarkar politicised religion and propagated Hindu nationalism as Indian nationalism, dwelling on cultural, racial and religious unity than the unity of citizens. He stated that the community of Hindus forms nationalism while other minorities will either have to submerge their identities or live at the mercy of majority.

The very foundation of constitutional democracy rests on liberty, equality and fraternity. There is no scope for religious supremacy. Bhagwat now doesn’t refer to Hindu in terms of religion but tries to achieve the same goal as set by Golwalkar and Savarkar.

Even in his speech in Ranchi, he said: “All Indians might have diverse religious values but they stay connected to the country through a single word ‘Hindu’. The word ‘Hindu’ does not represent a particular community rather it is the recognition of a country on the world map.”

Bhagwat added: “The word ‘Hindu’ integrates the country and brings about social harmony.”

Social scientists and political rivals feel his vague formulations on unity without dwelling on other religious identities and his obstinate refusal to distinguish between Indian nationalism and Hindu nationalism bring nothing new to the table.

B.S. Moonje, one of the co-founders of the RSS, went to Italy where he met Mussolini and visited Balilla and Avanguardisti organisations — the keystones of the fascist system of indoctrination of youths — in March 1931, and played a crucial role in moulding the Sangh parivar along fascist lines.

In his book, We or Our Nationhood Defined (published in March 1939), Golwalkar compares the project of promoting Hindu culture with German anti-Semitism. “To keep up the purity of the race and culture, Germany shocked the world by her purging the country of the Semitic races – the Jews,” he wrote.

Golwalkar contended that “the foreign races in Hindustan must either adopt the Hindu culture and language, must learn to respect and hold in reverence Hindu religion, must entertain no idea but those of the glorification of the Hindu race and culture, i.e of the Hindu nation and must lose their separate existence to merge in the Hindu race, or may stay in the country, wholly subordinated to the Hindu nation, claiming nothing, deserving no privileges, far less any preferential treatment not even citizen’s rights.”

Although after Gandhi;s murder, the book was disowned by Golwalkar, his Bunch of Thoughts has retained much of these formulations. The RSS and the BJP have so far never condemned or formally disowned these formulations and hence abandoning the word “nationalism” to dissociate with Nazi philosophy will at best be hollow symbolism.

The debate on the other side is also hunting for new metaphors to counter the RSS brand of nationalism. In a book published a few days ago -– Vision for a nation: Paths and Perspectives — Ashish Nandy and Aakash Singh Rathore wrote: “Can cold constitutional values such as fraternity, secularism and liberty ever quell the rage that hatred and nationalism have fomented on the streets, and chill this propensity towards violence?”

They added: “Love, for example, even tolerant inclusion, is extremely difficult to vernacularize. And yet we have no alternative other than vernacularizing our basic constitutional values, of championing sadbhavana (goodwill), ahimsa, and a related basket of concepts that may contain more heat, more passion. It is a tall order to make fraternity and love politically organic, but inclusive concepts — ideological and ethno-racial — must occupy the mental and spiritual space currently monopolized by exclusive ones.”

In the same book, CPM general secretary Sitaram Yechury contended that “this battle will unfold in every single sphere of our social political and economic life. In the final analysis, it is the people of India who will have to be crucial players in the defence of this idea of India and its full realization. This can be done only by winning the battle of Indian patriotism against Hindutva nationalism.”