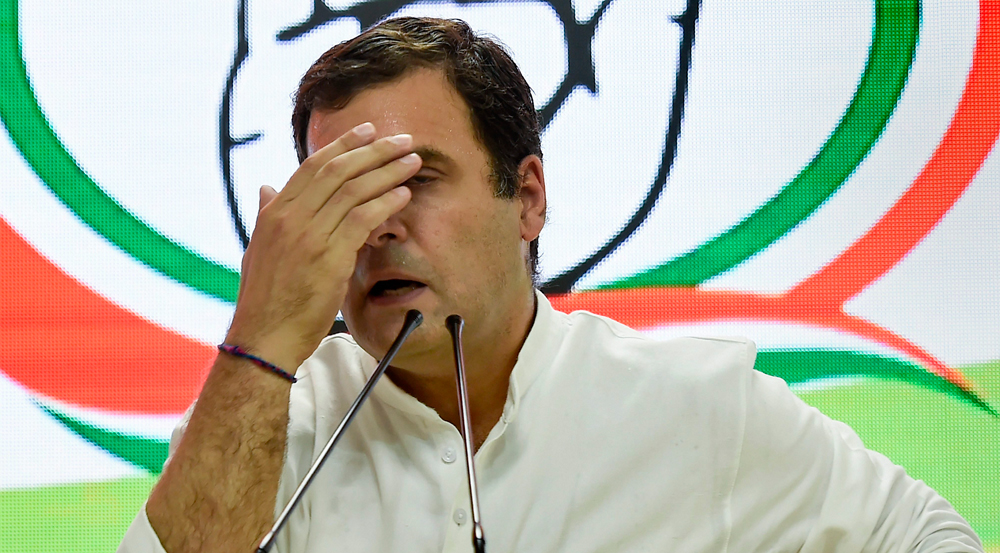 Inexplicable. That is what the Congress rout is. The party did not dream of a grand comeback for itself but had hoped the Opposition collectively would gain enough support to dislodge Narendra Modi. That hope lies shattered, as does the presumption that Opposition unity is the right antidote to the Modi magic.

Unlike in 2014 when it hopelessly grappled with a fait accompli, the Congress this time sewed up effective alliances and ran a focused campaign. Its expectation of winning around 130 seats appeared reasonable, but the party fell well short.

Questions are being raised about Rahul Gandhi’s leadership but without convincing arguments. After the party’s worst-ever defeat in 2014, he had worked over the past five years to build a formidable challenge to Modi.

The close fight in the Gujarat Assembly election, pragmatism in Karnataka and victories in Punjab, Madhya Pradesh, Rajasthan and Chhattisgarh demonstrated Congress resurgence.

He drilled holes in Modi’s image of personal integrity and his claims of development, and ran an issue-based campaign while the Prime Minister focused on Pakistan. Rahul toured the length and breadth of the country, addressing more rallies than any leader of the ruling party or the Opposition, and emerged as the main challenger to Modi.

The Congress produced a fine manifesto and the issues it identified for the campaign — unemployment, agrarian distress and the attack on institutions — had the endorsement of the entire Opposition. The NYAY (minimum income guarantee) scheme was a potential game-changer, but there was criticism that word about it did not reach the masses.

Party strategists deny that their arrogance was a hurdle in coalition-making. Alliances were worked out in Bihar and Jharkhand, yet they failed. In Tamil Nadu the alliance with the DMK yielded results. In Delhi, the BJP vote share shows an alliance with the AAP would have made little difference. In Maharashtra, the coalition with NCP’s Sharad Pawar worked effectively on the ground but failed.

Another factor often cited in a defeat is the weakness of the local party organisation. But the Congress and its allies had a strong presence in Karnataka, Maharashtra, Madhya Pradesh, Rajasthan, Chhattisgarh, Gujarat and Delhi.

So what went wrong? Some are asking why inexperienced leaders like K.C. Venugopal, Rajiv Satav and Gaurav Gogoi were given charge of states. But states with strong local leaders — Karnataka, Delhi, Madhya Pradesh, Rajasthan, Chhattisgarh — also did not show results.

Yet others pointed to the “hua-toh-hua” statement of Sam Pitroda over the 1984 anti-Sikh riots, but the Congress did better in Punjab than most other states.

A combative Mamata Banerjee and a seasoned Sharad Pawar both took a beating. Chandrababu Naidu, Mulayam Singh Yadav, Mayawati, Siddaramaiah, Kamal Nath, Akhilesh Yadav and Tejashwi Yadav — not one of them could come up with the winning strategy either.

The Congress could not have fielded better candidates than Digvijaya Singh in Bhopal, Jyotiraditya Scindia in Guna, Ajay Maken in New Delhi and Bhupinder Singh Hooda in Sonipat. All lost.

The reasons are deeper and more complex. While every leader privately referred to possible manipulation of EVMs and collaboration of the Election Commission, some acknowledged the party’s failure to tackle the deadly mix of Hindutva and nationalism deployed by the RSS-BJP.

Rahul highlighted his temple visits to dilute the false propaganda about the Congress being anti-Hindu, but did not adopt the narrative of majoritarian dominance. He stuck to the secular narrative, seeped in constitutional values of equality and justice. But that clearly found no takers in an environment in which Pragya Singh Thakur is embraced and Kanhaiya Kumar is rejected.

Rahul did not have the antidote to the lie that the Congress was pro-terrorist and pro-Pakistan. The party did not know how to deal with a voter who believed livelihood issues should be ignored because Modi had enhanced India’s prestige in the world.

This propaganda about Modi bringing India recognition was packaged as the government’s biggest achievement. The Congress believed that facts would speak for themselves and that pointing to Modi’s track record on foreign policy and national security would be enough. It wasn’t.

That a party cannot counter false propaganda is no excuse. But there is no reason to think someone other than Rahul would have been more effective. The experienced Digvijaya couldn’t do it in Bhopal, the shrewd Arvind Kejriwal couldn’t in Delhi, and the grounded Shibu Soren couldn’t in Jharkhand. This is a problem India’s political class will have to learn to grapple with.