Advertisement
Home / India / Cong: Modi was on picnic in Corbett during Pulwama

Cong: Modi was on picnic in Corbett during Pulwama 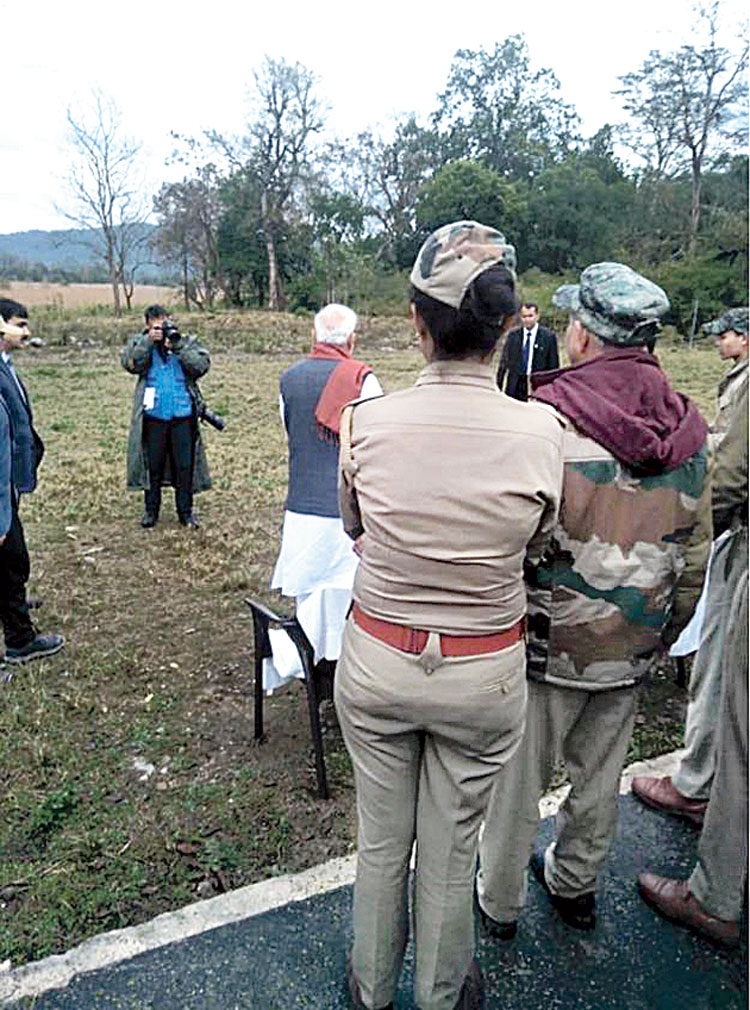 The Congress has accused Prime Minister Narendra Modi of insulting slain soldiers by continuing to shoot for a publicity film and picnicking in Corbett National Park till late evening on the day of the Pulwama attack that unfolded in the afternoon.

The BJP confirmed the event but denied Modi was being filmed and insisted his continued participation was part of a “desh-chalna-chahiye (the-country-has-to-go-on)” policy.

The defence stood out in sharp contrast with the way the Right-wing ecosystem has made ordinary citizens’ responses to the attack a barometer of patriotism. 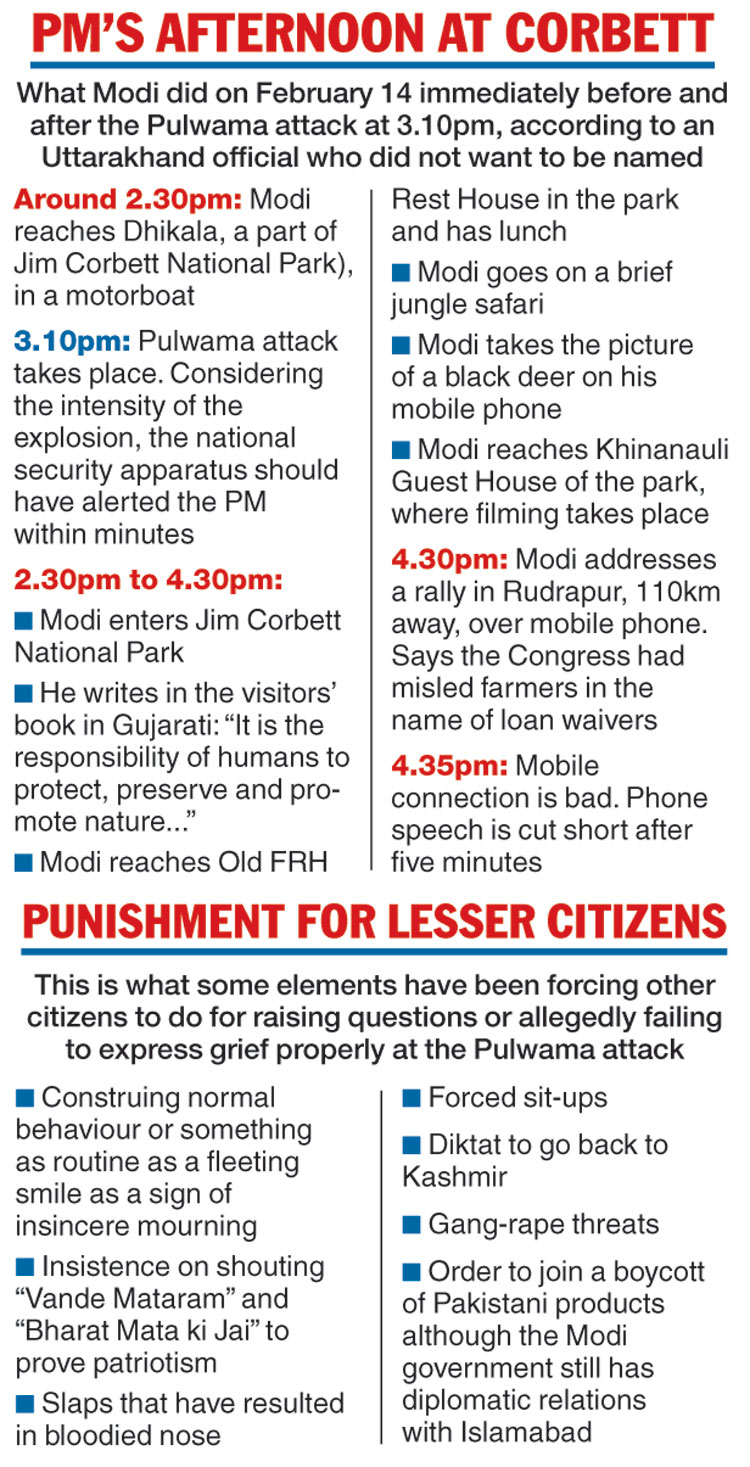 Showing restraint for a week even as the BJP and the government carried on with political campaign, the Congress finally came up with a comprehensive critique of the establishment’s failure on the national security front and the alleged “insensitivity” of the Prime Minister whose decision to fly off to South Korea on Wednesday night also came under severe criticism.

A full-fledged political war has erupted now as the BJP too hit back.

Releasing pictures of the purported photoshoot, Congress communications chief Randeep Surjewala said: “Nowhere in the world we find such examples of insensitivity when the head of the state insults the sacrifice of soldiers. Jab desh shaheedon ke tukde chun raha tha, Modi boating kar rahe the, chai nashta uda rahe the, Modi zindabad ke naare lagwa rahe the (When the country was collecting pieces of soldiers’ bodies, Modi was boating, having snacks, enjoying slogans in his favour).” An account by an official to this newspaper suggested Modi’s boat ride preceded the attack by over 30 minutes.

Surjewala explained: “This is unpardonable. The entire nation was stunned by the Pulwama attack on February 14. This happened at 3.10pm and the news started coming in five minutes. We held a press conference at 5pm. But the Prime Minister was busy picnicking in Corbett National Park in Ramnagar, Nainital. He was participating in a photoshoot of Discovery Channel and staring at crocodiles till 6.30pm. He then had tea and snacks in the Circuit House at 6.45pm.”

Displaying reports in local media and photographs, Surjewala said: “He also enjoyed a boat ride from Kalagarh dam to Dhikala along with Discovery Channel head and the camera crew who were filming him. It’s horrific that as our jawans were getting killed in Pulwama and the Prime Minister was busy doing self-promotional photo-shoots. He should have been chairing a meeting of Cabinet Committee on Security (CCS) at that time.”

Surjewala recalled how then home minister Shivraj Patil tendered his resignation in the wake of Mumbai terror attack, and fired away: “Why have Modi, national security adviser Ajit Doval and home minister Rajnath Singh not owned responsibility for the unpardonable failure? How did local terrorists acquire hundreds of kilos of RDX, M4 carbine and rocket launchers? How was an RDX-laden car permitted to enter the most secure Jammu-Srinagar National Highway, despite the ‘standard operating procedure’ for sanitising the convoy stretch?”

He added: “Why was Jaish-e-Mohammad’s video threat issued 48 hours before the Pulwama attack ignored by the government? Why was the J&K police’s specific intelligence input dated 8 February 2019 of proper sanitisation and use of IED by terrorists ignored by the Govt? Why was request of CRPF & BSF for movement of troops by air denied by MHA? Would air transit not have saved precious lives of our jawans? The government that spends over Rs 5,000 crore on self-publicity can’t manage a few lakhs for soldiers’ safety?”

The Congress played old videos of Modi to buttress its charge that he played worst kinds of politics on terror till 2014, including his decision to address the media at the place where anti-terror operation was on. Videos showing Modi asking the then Prime Minister how ammunition and resources reached terrorists and whether central agencies couldn’t check the flow were shown. Statistical details showing alarming rise in terror and casualties after 2014 were released.

They also raised questions about the government’s reluctance to announce a national mourning.

Surjewala said: “What is even more painful is that the PM didn’t announce national mourning so that political rallies and inauguration sprees at the expense of public exchequer are not cancelled. He also came an hour late to the Delhi airport on February 16 to offer homage to Pulwama martyrs as he was busy politicking in Jhansi.”

Apprehensive about the BJP twisting the intense questioning to whip up jingoistic passions, the Congress laid stress on the party’s unconditional support to the government while the ruling side never stopped the political discourse, though in the garb of official functions.

Surjewala said: “We extended unequivocal solidarity with our Armed Forces and the government to take on Pakistan and terrorists in giving a befitting reply. But Modi and BJP leaders’ shameful behaviour and politicisation of the sacrifice of our martyrs has forced the Congress party to react after seven days of restraint.”

Rahul too showed signs of returning to normal politics with this acerbic tweet on Anil Ambani: “The brave are martyred. Their families struggle. 40 Jawans give their lives but are denied the status of ‘Shaheed’. While this man has never given & only taken. He’s gifted 30,000Cr of their money & will live happily ever after. Welcome to Modi’s NEW INDIA.”