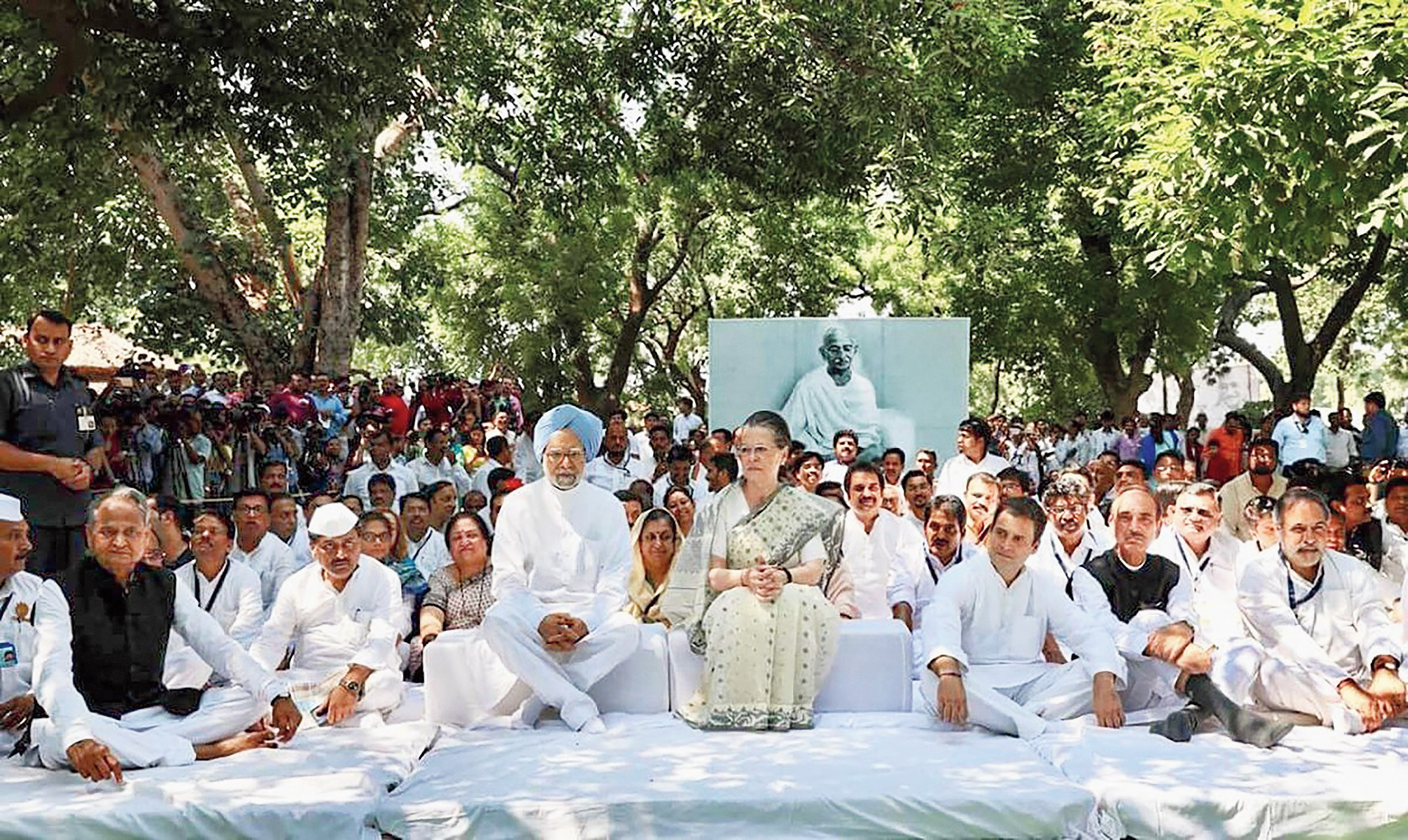 The Congress on Tuesday invoked the legacy of the Father of the Nation to call for a “new freedom struggle” to combat the Narendra Modi government’s “politics of intimidation” and imposition of “artificial uniformity” and underscored the “blatant hypocrisy of the RSS” for proclaiming itself as Mahatma Gandhi’s champion.

The Congress tried to position itself as the “only” party “that truly embodies the ethos of ‘Bharat’ that is fundamentally inclusive, liberal, secular and assimilation of India’s plurality and diversities”.

But the party also sought to delink its thrust from electoral politics, saying “elections will come and go. But the ideological battle has to be relentless and unswerving”.

The CWC met at Sevagram, where Gandhi had set up his ashram in 1936, to mark Gandhi Jayanti. On July 14, 1942, the Quit India resolution, which heralded an uprising for freedom from the colonial rule, was adopted at Sevagram.

The Congress ridiculed attempts by the Sangh parivar and Modi to tap into the legacy of the Mahatma.

“One may borrow the Mahatma’s spectacles for publicity campaigns, but implementing his vision will remain unfulfilled unless his principles are followed,” the CWC said in an oblique reference to the Swachh Bharat campaign that uses the iconic image of Gandhi’s glasses.

“The CWC resolves to expose the hollowness and doublespeak of the ideologies and organisations who have never believed in, let alone followed the Gandhian path of truth, tolerance, harmony and non-violence,” the resolution added.

It made a specific mention of the RSS. “The CWC underscores the blatant hypocrisy of the RSS that vilified and rejected Mahatma Gandhi during his lifetime, and which today has brazenly proclaimed itself to be his champion. It is its ideology that was responsible for spreading the atmosphere of hate that led to the Mahatma’s tragic assassination,” the resolution said.

Appealing for a national movement, the CWC called upon the “entire nation to fearlessly defend and uphold India’s foundational values and idea of India, which Mahatma Gandhi stood for, lived for and even sacrificed his life for”.

Reaching out specifically to young India, the CWC said all citizens, “particularly the young, to determinedly fight the politics of fear, intimidation, lies and deception”.

On a day police clashed with farmers on the Delhi border, the CWC paid tributes to Lal Bahadur Shastri on his birth anniversary and noted that “Jai Jawan, Jai Kisan” (associated with the second Prime Minister) “is not a slogan but a cardinal principle of faith for the Congress party”.

If the resolution evoked the legacy of Gandhi, Congress president Rahul Gandhi contrasted it with the governance of Modi.

“You have tried Modi…. The car is not moving, the engine has stopped, the tyres punctured. They have wasted time. Now trust the Congress. We want to listen to your mann ki baat and work together to take the country forward,” Rahul said.

At the public meeting held on Wardha’s Circus Ground, Rahul drew a sharp contrast: “He (Modi) stands with folded hands before the statue of Gandhiji but does everything that was anathema to the Mahatma. Modi creates strife between people from different religions and castes. Wherever he goes, he spreads hate and discord. The Mahatma stood for truth all his life. When Modi promised Rs 15 lakh in all bank accounts, was he speaking the truth or was he lying?”

BJP national president Amit Shah had earlier said the promise of Rs 15 lakh was a jumla (an idiomatic expression).

Rahul reeled off some more promises made by the Prime Minister before his elevation.

On the Rafale scandal, Rahul said: “He (Modi) looked this way and that way, when I asked him this question in the Lok Sabha.” The Congress president glanced, up, down and sideways, imitating Modi.

“He could not look at me because he was lying,” Rahul claimed.

Addressing the women in the audience, Rahul asked whether they remembered the days when they were forced to stand in queues while their money was being taken away, referring to demonetisation.

“The thieves of India, with the help of Narendra Modi, turned lakhs, crores of black money into white. Modiji took money out of your pockets and put it in the pockets of Nirav Modi, Vijay Mallya,” he said.