Party tries to battle embarrassing statements made by younger leaders 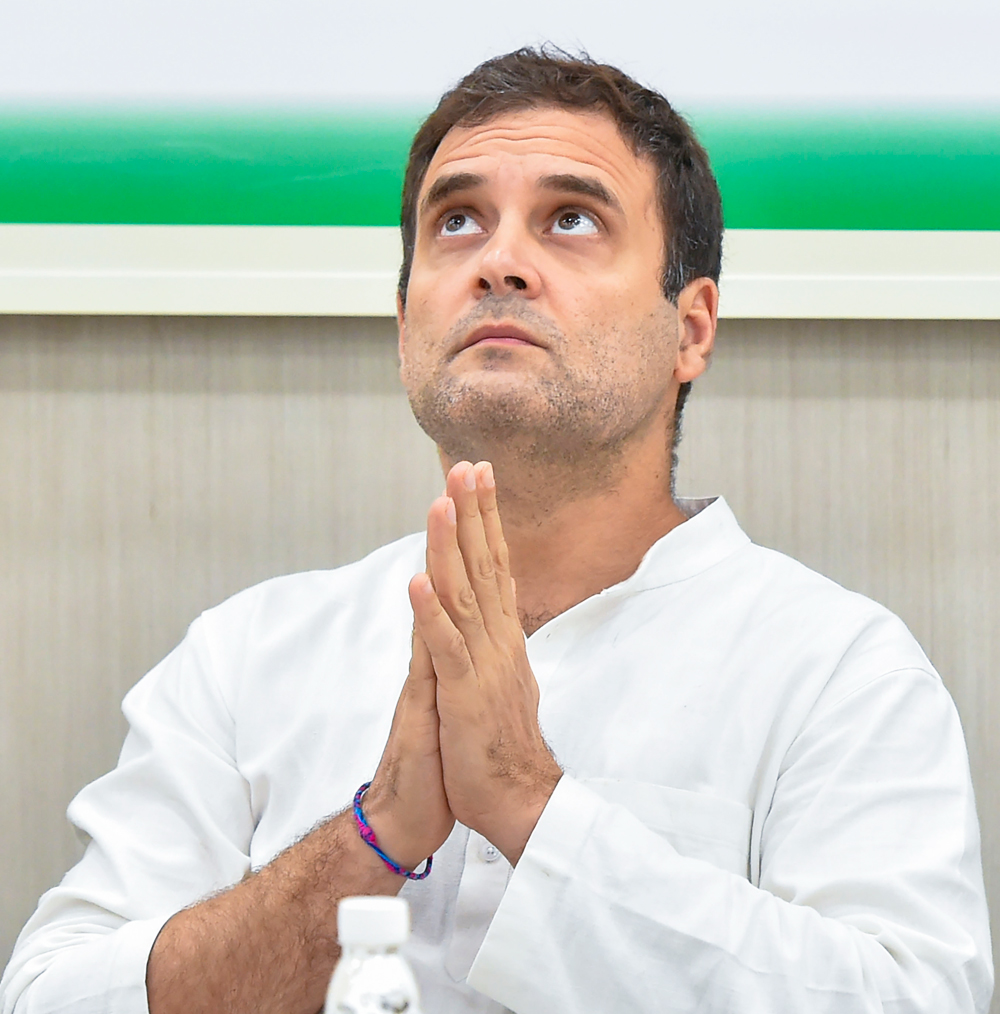 The Congress spoke in different voices on Tuesday on the abrogation of the special status of Jammu and Kashmir, prompting its highest decision-making body to meet at night and declare that the manner in which the government had pushed the decision through called “into question the very idea of India being a Union of States”.

The clarification from the Congress Working Committee was necessitated as leaders such as Jyotiraditya Scindia had stunned the party with their statements.

“I support the move on Jammu & Kashmir and Ladakh and its full integration into union of India. Would have been better if constitutional process had been followed. No questions could have been raised then. Nevertheless, this is in our country’s interest and I support this,” tweeted Scindia, who has been a Union minister and a general secretary of the Congress.

Scindia’s tweet gave the impression that he had glossed over the fact that the Congress had declared the government’s procedure unconstitutional.

If other young leaders like Milind Deora and Deepender Hooda also issued statements that were at odds with the Congress’s stand, so did the veteran Janardan Dwivedi, a former general secretary.

Party sources tried to battle the embarrassing statements by attributing them to lack of ideological conviction, opportunism and pique at being sidelined.

There was also an impression that the younger leaders, already crushed by the election result and the subsequent leadership vacuum in the party, were being swayed by public opinion that seemed to be tilting heavily in favour of the government.

It was against this background that the CWC met on Tuesday evening, by when the Lok Sabha, too, had passed the legislation related to Jammu and Kashmir.

A unanimous resolution, drawn up after resolving differences among a few members, said: “The CWC deplores the unilateral, brazen and totally undemocratic manner in which Article 370 of the Constitution was abrogated and the State of Jammu and Kashmir was dismembered by misinterpreting the provisions of the Constitution. Every principle of Constitutional law, States’ rights, parliamentary procedure and democratic governance was violated.”

The resolution added: “It deserved to be honoured until it was amended, after consultation with all sections of the people, and strictly in accordance with the Constitution of India. What the BJP government accomplished in the Rajya Sabha and in the Lok Sabha has grave implications going well beyond J&K and calls into question the very idea of India being a Union of States. Jammu & Kashmir acceded to India as one State and no government has the power to change its status or divide it or reduce any part of it to a Union Territory.”

The CWC asserted that “the integration of J&K with India is final and irrevocable”.

“The Congress pledges to stand with the people of Jammu, Kashmir and Ladakh and to fight the BJP and its divisive and diabolical agenda with every power in its hands. We urge the people of J&K to maintain peace and calm. The CWC strongly reaffirms the consistent and stated position of the Congress that J&K, including the areas under the illegal occupation of Pakistan and the part ceded by it to China, are integral part of the Republic of India.

“The integration of J&K with India is final and irrevocable. CWC firmly asserted that all issues pertaining to J&K are internal matters of India and no outside interference will be tolerated,” the resolution said.

Rahul Gandhi, who had not spoken on the subject on Monday, tweeted on Tuesday morning: “National integration isn’t furthered by unilaterally tearing apart J&K, imprisoning elected representatives and violating our Constitution. This nation is made by its people, not plots of land. This abuse of executive power has grave implications for our national security.”

In another tweet, he said: “Kashmir’s mainstream political leaders have been jailed at secret locations. This is unconstitutional & undemocratic. It’s also short sighted and foolish because it will allow terrorists to fill the leadership vacuum created by Government of India. The imprisoned leaders must be released.”

By then, Dwivedi had struck, saying a “historical mistake” had been corrected by the government.

“My mentor Ram Manohar Lohia was against Article 370 from the start.... My personal view is that this is a matter of national satisfaction. A mistake made during Independence has been corrected, even if belatedly,” Dwivedi said.

Dwivedi, who has been part of the Congress think tank for decades, chose to quote his “mentor” Lohia, knowing fully well that the architects of Kashmir’s accession were Jawaharlal Nehru and Sardar Patel, and the Congress philosophy on the subject has been distinctly clear.

Deora, who is close to Rahul, tweeted: “Very unfortunate that Article 370 is being converted into a liberal vs conservative debate. Parties should put aside ideological fixations & debate what’s best for India’s sovereignty & federalism, peace in J&K, jobs for Kashmiri youth & justice for Kashmiri Pandits.”

Hooda said his personal view was that Article 370 had no place in the 21st century but insisted that the procedure should be consensual and not dictatorial.

Others like Shatrughan Sinha, who was effusive in his praise of the dynamic Amit Shah for pulling off the coup, has been ideologically groomed in BJP tradition.