A group of nine academics, lawyers, writers and retired bureaucrats have expressed concern at recent outbursts of A. Vijayaraghavan 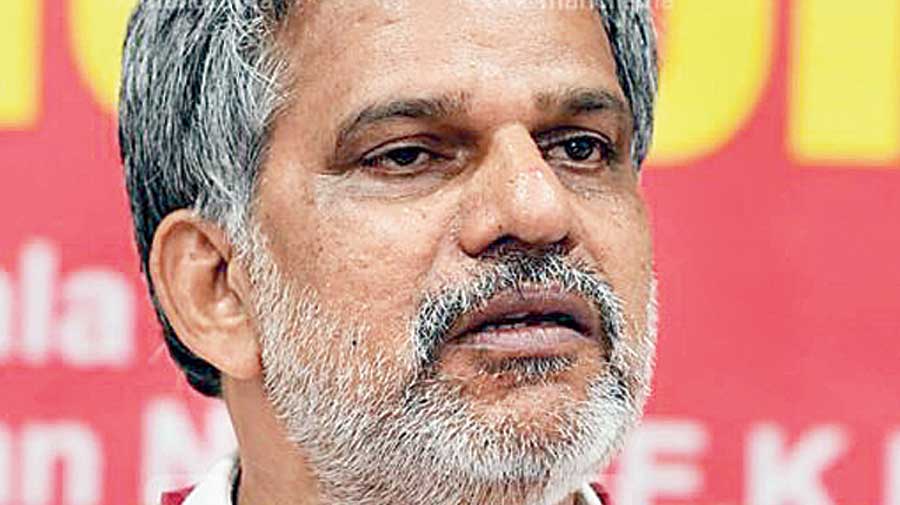 The acting secretary of the Kerala CPM has come under fire for alleged “Islamophobic” statements, with academics pointing to the incongruity of such diatribes from a Left leader although they were common in the Sangh ecosystem.

In a letter addressed to CPM secretary Sitaram Yechury, a group of nine academics, lawyers, writers and retired bureaucrats have expressed concern at the recent outbursts of A. Vijayaraghavan, the party’s state secretary in-charge, ahead of the Assembly elections.

They expressed concern at Vijayaraghavan engaging in “Islamophobic statements vitiating the social environment of Kerala”, while pursuing his unrelenting attacks on the Indian Union Muslim League  and the Jamaat-e-Islami.

“He takes the pretext of criticising the Muslim League and the Jamaat-e-Islami to unburden himself of hatred for Muslims without reservations. This is not unfamiliar in India’s current political terrain as we hear these on a daily basis from the Sangh parivar, but from CPIM this has been shocking,” argued the complainants that include retired additional development commissioner and director of the State Institute of Rural Development, P.M. Pareethu Bava Khan.

“In his latest tirade he accuses Muslims of being more communal than the majority communalism,” the letter stated, referring to Vijayaraghavan’s attack on the IUML.

Vijayaraghavan had last month slammed the Congress for strengthening minority communalism by encouraging the Jamaat-e-Islami — widely seen as a Right-wing organisation — which would in turn benefit the BJP.

“A whole community is vilified. And by trivialising the communalism of the Sangh parivar, Vijayaraghavan has betrayed the trust the secular, democratic forces of the country have invested in the CPM as a partner in the struggle for a saner future…,” stated the letter sent to Yechury on Tuesday.

Khan told The Telegraph that copies of the letter would be sent to the CPM state secretariat in Thiruvananthapuram and Kerala chief minister Pinarayi Vijayan.

“The name calling of people that hold a different view point than that of the ruling political formation that has now become a timepass of theirs — with communists themselves being one of the targets — has been liberally practiced by Vijayaraghavan. He was calling people ‘terrorists’ who have been democratically opposing environmentally questionable projects and projects that require displacements because there were visible faces of Muslims,” the letter said.

Vijayaraghavan could not be reached for comments as he was busy with meetings related to the April 6 elections. Yechury has not publicly commented on the allegations.

The letter didn’t spare others in the CPM who had made equally communal statements in the past and named Kodiyeri Balakrishnan, the state secretary who is on leave due to personal issues. The letter referred to his comment about Muslim leaders in the Congress-led United Democratic Front.

“He (Vijayaraghavan) has not been alone in speaking so, unfortunately. Kodiyeri Balakrishnan has said that the UDF is led by x, y and z (three Muslim names), in a way to create worry among the Hindus. This was an attempt to score over the UDF that has vowed to enact a law for protecting the traditions at Sabarimala, to win over conservative Hindus, as if Islamophobia pays,” the letter stated.

The allegation was apparently an allusion to Balakrishnan’s statement in October 2020 accusing the Congress of surrendering its leadership to the Congress’s M.M. Hassan, IUML leader P.K. Kunhalikutty and Jamaat-e-Islami leader M.I. Abdul Aziz. “Earlier the UDF was led by the Kunhalikutty-K.M. Mani-Oommen Chandy triumvirate. But it’s now led by Hassan, Kunhalikutty and Aziz,” Balakrishnan had said.

The letter recalled how then chief minister and CPM veteran V.S. Achuthanandan had in 2010 accused the Popular Front of India, another Muslim Right-wing group, of using “money and marriages to make Kerala a Muslim-majority state”.

“Our concern is about the possible destruction of the social fabric of Kerala, the land that lives the values of our ancient Dravidian King Mahabali. The new social engineering the CPM is doing in Kerala is, strangely, analogous to the reactionary politics of the vimochana samaram of the past where the orthodoxies of various religions caused immense social disruption in their effort to overthrow a democratically elected Left government,” the letter said.

While Mahabali is a mythical Dravidian king who ruled Kerala and was sent to the netherworld by Vamana, an avatar of Lord Vishnu, “vimochana samaram” was an anti-communist backlash that played out against the party’s first elected government in Kerala during 1958-59.