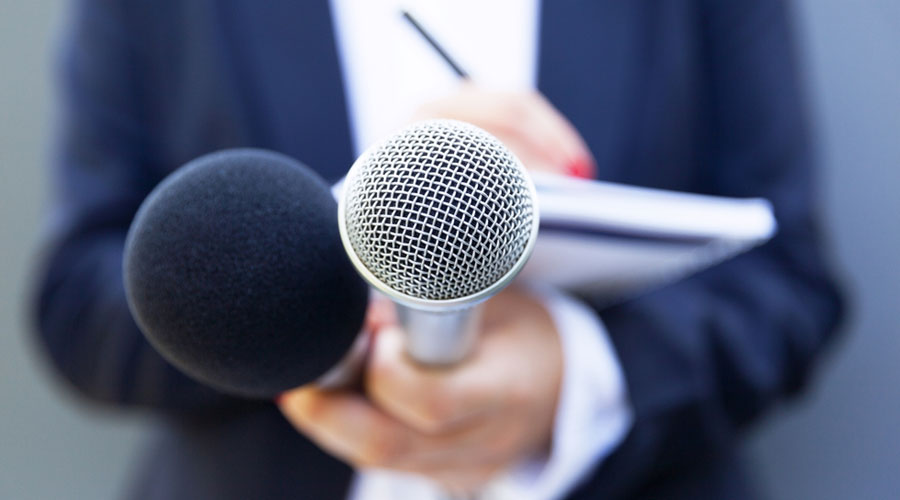 It said the journalists “were in the area for follow-up reporting in connection to an earlier story by Singh and Tantray on local women’s allegations of assault and sexual harassment at the hands of the Delhi police”
Shutterstock
Pheroze L. Vincent   |   New Delhi   |   Published 13.08.20, 04:23 AM

Three journalists from The Caravan magazine were assaulted by a crowd on Tuesday while investigating signs of fresh communal tension since August 5 in northeast Delhi, which witnessed riots in February.

“On the afternoon of 11 August, three journalists with The Caravan — Shahid Tantray, Prabhjit Singh and a woman journalist — faced a brutal attack while reporting in the nation’s capital,” the magazine said in a statement.

“The incident began while the journalists were taking photographs of saffron flags that had been put up in the area…. Some men approached them and told them to stop. One of the men, who was wearing a saffron kurta and had a bandage on his arm, identified himself as a ‘BJP general secretary’. He asked Tantray for his identity card.”

The statement added: “The mob launched their attack upon realising that Tantray was Muslim. During her attempt to get away from the attack, the woman journalist faced sexual harassment from a middle-aged man who exposed his genitals to her.”

The woman journalist, who had got separated from her colleagues, has told police that a group of young men surrounded her and began “making cheap and lewd comments and started saying ‘Dikhao, dikhao (Show, show)’.”

As she walked away, “a middle-aged man in a dhoti and a white T-shirt, with a bald head and a slim ponytail, stood in front of me. He then opened his dhoti and exposed his genitals while looking at me.”

On her way to the police station, she was hit on the “head, arms, chest, hips” by another group.

The magazine said: “She was finally able to escape with the help of a police official, who took her to Bhajanpura police station. Before the mob found the woman journalist, it had continued its attack on the other two journalists. Tantray was abused with communal slurs…, threatened with murder, and repeatedly slapped and kicked.”

The magazine added: “When Singh tried to intervene, the mob kicked him as well…. Two police officials who were present at the scene were unable to prevent the mob from attacking the journalists. Ultimately, more police officials arrived at the scene and they were able to take the two journalists to the Bhajanpura police station.” All three escaped with minor bruises.

The Caravan statement said no FIRs had yet been registered on the journalists’ complaints.

It said the journalists “were in the area for follow-up reporting in connection to an earlier story by Singh and Tantray on local women’s allegations of assault and sexual harassment at the hands of the Delhi police”.

The office of the deputy commissioner of police (northeast Delhi) had tweeted on Tuesday: “Today afternoon some journalists were taking photographs and interviews in the communally sensitive area to which local people objected. Police acted swiftly to pacify the situation. Complaints filed by both sides and being enquired into.”

On Wednesday, the police issued a rejoinder denying The Caravan’s report on alleged sexual harassment of women at Bhajanpura police station on August 8.

On the assault on their reporter, the police PRO, deputy commissioner Eish Singhal, said in the rejoinder: “They were taking pictures which led to heated exchange of words between media persons and local people. Police personnel acted swiftly and brought media persons to the police station.

“Taking pictures without consent may provoke those present and create law and order problems including communal problems. Journalists of Caravan and a lady of the locality had given cross-complaints which are being enquired into and appropriate legal action will be taken on conclusion of the enquiry.”

The Press Clubs of India (Delhi) and Chandigarh have spoken out against the attack. The PCI has invited author Arundhati Roy and activist Prashant Bhushan to speak on this at the club on Thursday.

“If journalists continue to be attacked in this fashion, the eyes and ears of society will be silenced,” the PCI’s office-bearers said in a statement. “We demand the following: 1. The immediate registration of a proper FIR, which the police have so far refused, and 2) a judicial probe to establish the obstacles being placed in the path of journalists reporting the spread of the communal virus since February this year in a communally sensitive part of Delhi. Such a probe should be set up by the elected government of Delhi.”

The Chandigarh Press Club, of which Singh is a senior member, demanded the “arrest of the goons who attacked the journalists”.

“Delhi authorities need to stop hesitating and launch a formal investigation into the attack on three journalists with The Caravan magazine, which occurred in broad daylight in India’s capital,” said Steven Butler, Committee to Protect Journalists -- Asia program coordinator, in Washington DC. “Police must ensure journalists are not targeted for their work, and should ensure that members of the press of all faiths can work freely.”