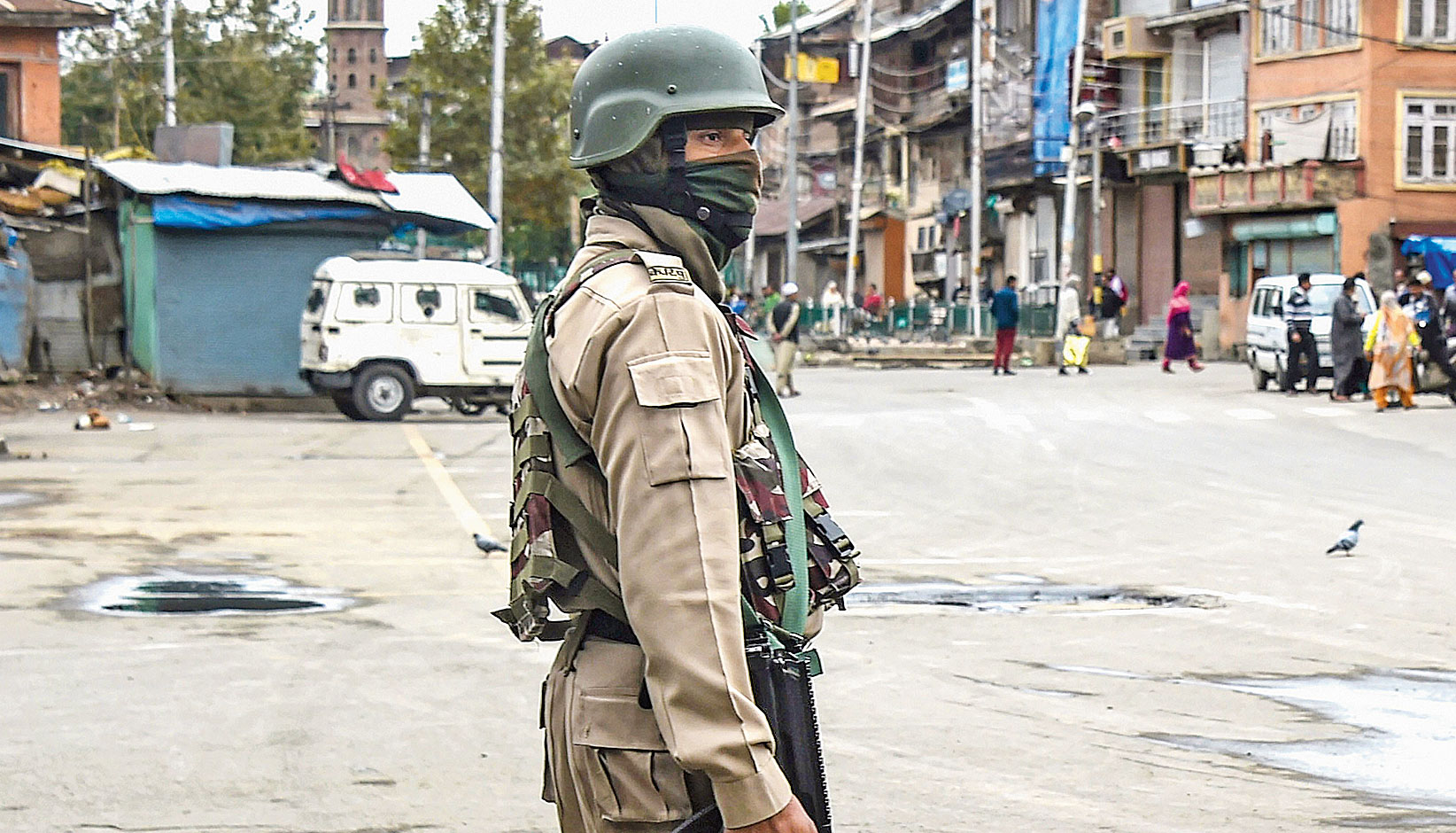 Four days after the Narendra Modi government imposed a blanket “curfew” throughout Kashmir followed by the announcement of the abrogation of key provisions of Article 370, an imam in one of the old mosques in south Kashmir made a heart-rending supplication that usually concludes the Friday prayers.

He wailed at the loss of mulk-e-Kashmir — or the country of Kashmir, as the Valley is traditionally known — and asked for God’s help and guidance.

The broken-hearted audience of curfewed devotees who had made it to the prayers cried in unison that gradually turned into a course of mourning.

For the next couple of minutes, all that would issue from the minaret were uncontrolled sobs of cowered-down people who had lost all sense of belonging and feelings of identity.

The security personnel who had been deployed in strength to keep a constant vigil on everything Kashmiri could hear the moans from the nearby road and the alleyways they had blocked with concertina wire.

They felt alarmed, given that a large number of them had been airlifted only a few days ago with scant information about their new deployment and its purpose. A mid-ranking officer started to display signs of discomfiture, perhaps more because of the appreciation of his own strategic importance in guarding national interest as constantly laid out by television channels where patriotism on the Kashmir issue is measured by the decibel levels one could produce in the studio.

According to some eyewitnesses, as soon as the prayers finished, the personnel enquired about the whinging that was so loudly performed. Fearing a harsh reaction, the people avoided a proper response. Thereupon, the officer allegedly approached the devotees with an austere pitch and instructed them to avoid any such crying presentation in the future.

At the time, the fear of the unknown was so fresh and deep that a large number of people were unable to sleep for days and even weeks. The sight on the roads and streets was terrifying; almost every security personnel manning the roads or, in precise terms, blocking them and ordering public movement was a non-Kashmiri. The Kashmir police had all been removed except for the symbolic presence of a couple with every contingent of the CRPF or the army.

The Kashmiri cops were unarmed, allowed only to carry plastic canes and deployed to assist the non-native personnel in translating their instructions or perhaps advising them on minor issues of no strategic value.

Under these circumstances, the fear generated by the informal enquiry and instruction passed by the security officer forced the mosque’s administrative committee to request the imam to leave. Sensing the mood, he straightaway complied.

In the heavy presence of military personnel of every ilk and hue, the dread that has been cultivated on the ground is so deeply overwhelming that Kashmiris have been deprived of even a decent mourning at this acute sense of a tragic loss.

On the same Friday — August 9 — just before the prayers were to commence, another CRPF officer from the neighbouring camp had called on the imam at our local mosque and advised him that there should be no bhadh-kau bhashan or incendiary sermon. Otherwise, the imam was to be held responsible, a prospect that, under the new rules of engagement, could earn an instant booking under the Public Safety Act that carries a prison sentence of six months to two years without recourse to any credible mechanism of justice.

To my knowledge, our local preacher had been guilty of dispensing long and boring sermons that I have religiously avoided but never inflamed passions on any issue — small or significant. However, the threat was so potent that our mosque stopped the Friday sermon for several weeks in a row. It was later reinstated for a couple of Fridays but has since been excised altogether.

Several weeks into the siege, rumours started pouring in about large-scale infiltration. Usually, such claims are introduced with the Kashmiri word dapaan, meaning “it is being said”.

In the two weeks prior to Pakistan Prime Minister Imran Khan’s September 27 speech at the UN General Assembly, I had been subjected to a dozen or so dapaans from various mouths claiming sightings of mehman (guest) or dastaeir (literally meaning turbanators), neologisms for Afghan fighters. All these stories suggested that the contingents of foreign combatants were roaming about with each group supported by a couple of Kashmiris who acted as their guides and interpreters.

It felt as if the abrogation of Kashmir’s special status under Article 370 had a bearing on the opposite side as well — relegating Kashmiris to just a cosmetic advisory role, as in the case of the Jammu and Kashmir police.

Almost all Kashmiri Muslims — from the valleys of Kashmir, Pir Panchal and Chenab; and Kargil to Jammu — fear their indigenous character is under serious threat as their identity will be subsumed by an aggressive New Delhi that is on a civilisational mission as crudely enunciated through the slogans of ghar-wapsi.

The Kashmiri Pandits who claim to be the “indigenous inhabitants”, thus casting the rest of us as foreigners, if not aliens, are over the moon for finally getting the opportunity to deliquesce into the sea of people from mainland India.

But not all indigenous species have received the “development” so carelessly. One of the famous strains of basmati rice cultivated in Jammu has been left devastated. According to a recent news published in The Tribune (October 9, 2019), one of the indigenous varieties known as the 370 basmati has been damaged due to windstorms that could be conjecturally linked to the political maelstrom that destroyed the old order in the state.

The report claimed: “The 370 basmati is a vulnerable crop [that is] grown in the Jammu plains, exclusively in Jammu, Samba and Kathua districts [and] is famous for its long grain and fragrance. It has natural pest resistance.”

Alas! it couldn’t repel the bacterium of Hindutva politics.