Cleaners die under sewage in Varanasi 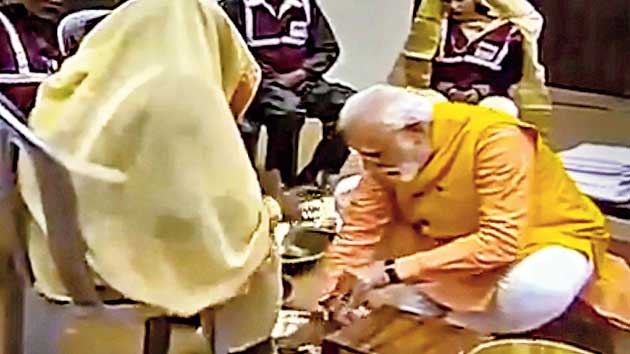 Two part-time municipal sweepers hired by a private company to clean a sewer in Varanasi died after climbing down the manhole, apparently buried under a mountain of sewage disgorged by a burst pipe.

The company had not provided Chandan Kumar, 34, and Rajesh Paswan, 26, with gas masks or safety belts — which are attached to a cord with which over-ground colleagues can pull them up — local administration sources said.

The two deaths on Friday evening have brought under focus the four-year-old policy of the BJP-led municipality in Prime Minister Narendra Modi’s constituency to outsource the cleaning of sewers to private companies with Swachh Bharat funds provided by the Centre.

Chandan and Rajesh were part-time municipal sweepers. “The company that hired them had promised to ensure that the municipality confirmed their jobs within a few days,” alleged Chandan’s wife Puja Devi.

The Telegraph tried to contact the company’s representatives for their reaction but calls to numbers provided by sources evoked no replies.

Sources in the local administration said that cleaners going down manholes are supposed to wear safety belts as well as masks to shield themselves against harmful gases like methane, carbon dioxide and sulphur dioxide. But, they said, the company that had hired them — as part of a seven-day-old drive to clean Varanasi’s sewers — didn’t give them any safety equipment.

“We are helpless because it’s official policy to hire private companies to clean the sewers. It’s done periodically, mostly during the beautification drives before VVIP visits. All the deals with the company were done in Delhi,” an official said, asking not to be identified.

“The private companies pay the labourers Rs 259 a day for ordinary cleaning jobs, and an extra Rs 200 to Rs 300 to those willing to risk their lives and enter the gas-filled sewers.”

Sending people down manholes without safety equipment amounts to promoting manual scavenging, which can bring up to a year’s jail and/or a fine of Rs 50,000 for those doing the hiring. No one has been convicted under this 2013 law so far.

Chandan, Rajesh, Sumesh Kumar and Manni Kumar had climbed down the manhole with the help of an iron ladder around 4pm on Friday.

Sumesh and Manni returned immediately and told their supervisors that sewage was dripping from a crack in a choked pipe and that it needed to be flushed with water before the sewer could be cleaned. But Chandan and Rajesh didn’t return.

A National Disaster Response Force team arrived about an hour later and fished the bodies out around midnight after a seven-hour search.

Relatives of the two victims threw stones at the police and the ambulance that had been brought to take the bodies for post-mortem. A baton charge broke the mob up.

Gaurang Rathi, acting district magistrate of Varanasi, said: “We have formed a three-member probe committee. The company that had hired them has decided to pay Rs 10 lakh to the family of each victim.”

Chandan’s mother Prema Devi, who has a confirmed job as a sweeper with the civic body, told reporters her son had left behind a three-month-old daughter. “How are we going to live without him? We are supposed to keep cleaning waste, and then die under the same waste,” she said.