Bodies being taken to their respective hometowns for last rites, officials said 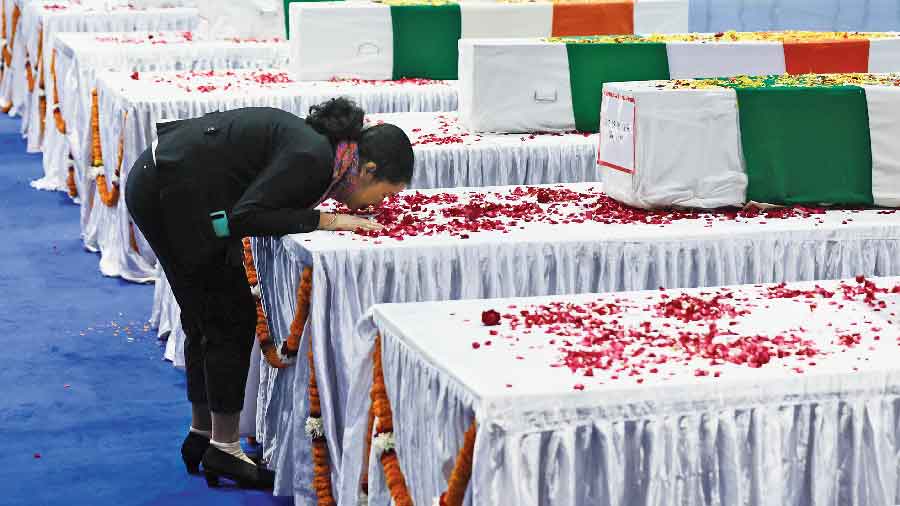 The bodies of five more armed forces personnel, killed in the IAF chopper crash near Coonoor, were identified and they are being transported to their respective hometowns, military officials said on Saturday.

Efforts to "positively identify" last mortal remains of victims are continuing, they said.

"The mortal remains of the five personnel were released to close family members this morning," said a senior military official.

The bodies are being taken to the hometowns of the five personnel by air for last rites with appropriate military honour, the officials said.

Chief of Defence Staff Gen Bipin Rawat, his wife Madhulika and his Defence Adviser Brigadier LS Lidder were among the 13 people killed in the crash.

As per plan, the mortal remains of JWO Pradeep will reach Sulur at around 11 am, while the body of Wing Commander Chauhan is expected to reach Agra at 9:45 am, the officials said.

The body of JWO Das will be flown to Bhubaneswar and the aircraft carrying it is expected to land there at 1 pm.

The mortal remains of Lance Naik B Sai Teja will reach Bangalore at around 12:30 pm and that of Lance Naik Vivek Kumar will reach Gaggal in Himachal Pradesh at 11:30 am, the officials said.

The mortal remains of all the 13 people killed in the air accident were brought to Delhi from Sulur in Tamil Nadu on Thursday evening, a day after the crash.

The unidentified bodies were kept in the mortuary of the Army Base Hospital in Delhi Cantonment.

The officials said tributes will be paid to the personnel at Base Hospital before the bodies are sent to their hometowns.

The Army and the Air Force carried out the identification of the bodies keeping in mind the sensitivities and emotional well-being of the family members.