Advertisement
Home / India / Challenge of love for teachers in Calcutta

Challenge of love for teachers in Calcutta

‘Greater responsibility than ever’ 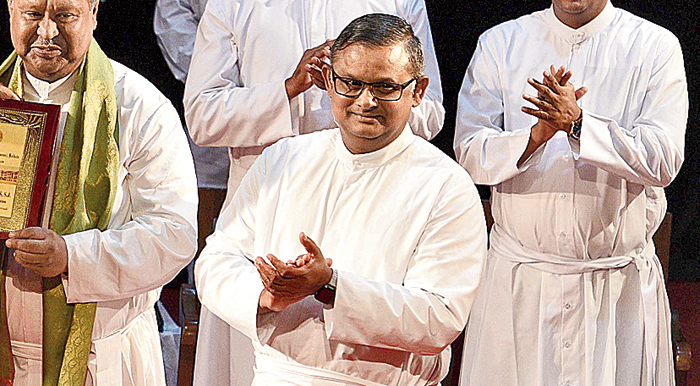 Teachers have a “greater responsibility than ever” of imparting to the young values of tolerance and non-violence at a time “our understanding of the world is being destabilised and deconstructed”, the principal of St. Xavier’s College said at a Teachers’ Day programme in the institution on Thursday.

“Today we are experiencing profound cultural and psychological challenges and changes. Our understanding of the world is being destabilised and deconstructed. As teachers, we have greater responsibility than ever to provide the much needed set of values to the young generation that include love, peace, tolerance, non-violence,” said Father Dominic Savio, the principal.

Father Savio said teachers had an unparalleled opportunity to build those who would build the nation and the world for tomorrow.

“It’s a great feeling of self-respect and, at the same time, great responsibility, a great challenge…. Today, more than ever, a greater responsibility rests with the teachers in regard to building the character, the acumen of the youth of India,” he said.

“The most important to us as teachers is to inculcate strong, moral and human values in the students,” he added.

Father Savio stressed the need to train children in “decent behaviour” and the ability to make choices.

“Our students need to be taught the norms of decent behaviour so that they develop fine qualities. There are certain moral values that have to be inculcated in children during the formative years so that they will be able to make choices that are beneficial to them. This is the collective responsibility of parents, teachers and school,” Father Savio said.

The spirit of pluralism and oneness in the inculcation of scientific temper, patriotism and a sense of mission are virtues needed to nurture young minds to take the country forward, Father Savio said.

“The ethical and moral values, awareness of our heritage, of thought and significance of culture, our spirit of pluralism and oneness in the inculcation of scientific temper, patriotism and sense of mission are the virtues needed to nurture young minds… in order to take the country forward,” he said. “It is said that the most powerful lessons are never spoken loud.”

“Even in dire circumstances teachers have rendered invaluable service towards individual, social and national growth. Let us therefore accord due respect to other teachers as has been India’s world tradition,” Father Savio said.

“St. Xavier’s, what it is today, it is because of our teachers, our teachers both teaching and support staff,” he added.

The chief guest at the programme, Bengal governor Jagdeep Dhankhar, said teachers should be given their due respect before it is too late.

“…The respect for the teacher in the society has to go up so that it reaches the level which is long overdue to them. Dr Sarvepalli Radhakrishnan, is he remembered as the President of India? I dare say yes, but not as much as a teacher. As Vice-President of India, he was there 10 years. He is a globally recognised philosopher but he is remembered all over the world as a teacher,” Dhankhar said.

“I thought which could be the best platform… to unfold one’s heart. One thing I have come to know being chancellor of so many universities, that we need to do something to see that our teachers are not stressed,” the governor added.