The condition of the tea industry is one of the major issues in Alipurduar; around 11 lakh of the 16 lakh voters are linked to this sector 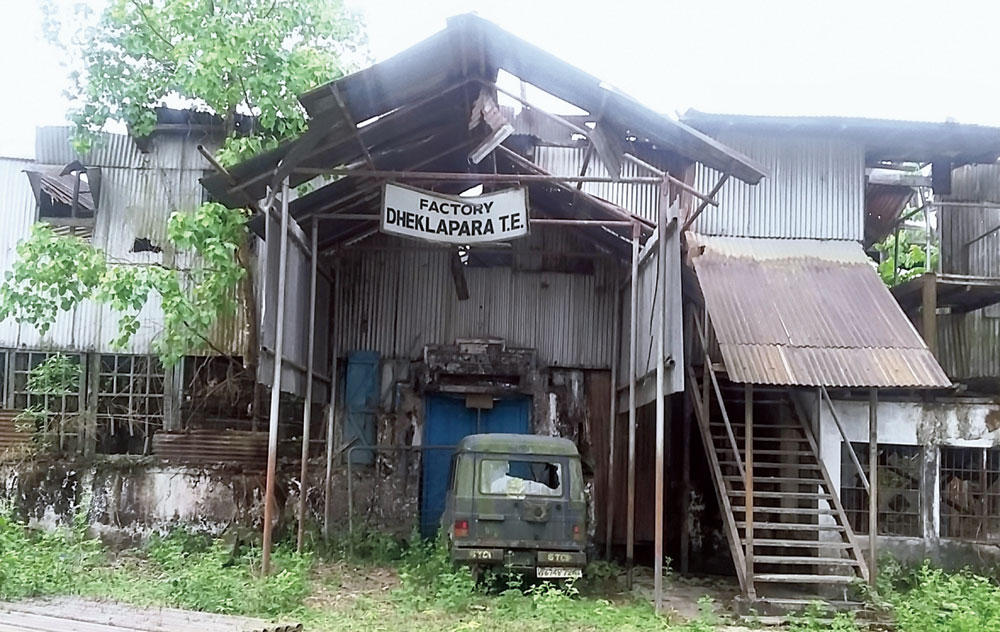 The Dheklapara Tea Estate, shut since 2005. Around 11 lakh of the 16 lakh voters of Alipurduars Lok Sabha constituency are linked to the struggling tea sector.
Picture by Anirban Choudhury
Devadeep Purohit   |   Alipurduar   |   Published 09.04.19, 02:18 AM

Ajay Sharma will leave his home in Bhutan post lunch on April 11, walk up to the international border, show his voter ID card to the guards, cross the border on foot and then walk another 200 metres to the polling station to cast his vote in the Lok Sabha election.

The 47-year-old is an Indian citizen with businesses both in India and his country of residency. He also has multiple homes in India, but prefers living abroad. Unlike Nirav Modi or Vijay Mallya, he has not run away from agencies like the CBI or the ED.

“I live here because of peace, safety and security. There is no pollution. And most importantly, no extortion in the name of puja or other social functions,” said Sharma, sitting in his Deki Line office in Phuentsholing, the second biggest city in Bhutan after capital Thimphu.

Sharma has multiple business interests, ranging from transport to construction, and has to spend most of the day in Jaigaon, a bustling business hub on the Indian side.

Jaigaon, in Alipurduar district, is the only land port between the friendly neighbours India and Bhutan. Estimates suggest that the annual trade volume using the Jaigaon-Phuentsholing route is not less than Rs 5,000 crore.

“Business thrives in Jaigaon because of Bhutan,” said Sharma, who works in Jaigaon but lives in a rented accommodation in Phuentsholing.

“I can’t own property in Bhutan because of the rules. I live in a rented house with my family, but am happy,” said the short and well-built man, who walks with a limp. “There are 100-odd people like me, who are Indians but live in Phuentsholing. And almost all of them are here because of a better quality of life,” he added.

Though Trinamul’s Dasrath Tirkey won the seat in 2014, the BJP nominee lagged behind by just 27,000 votes. As the BJP did surprisingly well in last year’s panchayat polls, bagging 30 per cent of the seats, the party is bullish about wresting Alipurduars from the Trinamul.

There is little doubt that the contest at hand is tough, but the Trinamul seems to have an edge because of its strong organisational presence in the district, especially among the tea-garden workers, and the division among Gorkha voters along Binay Tamang and Bimal Gurung camps of the Gorkha Janmukti Morcha.

Besides, Mamata Banerjee’s man for north Bengal, Aroop Biswas, has engineered a slew of defections in favour of Trinamul in the last few months. And in the game of poll arithmetic, the ruling party in the state is taking comfort in the fact that RSP’s Mili is getting good response from women in the tea gardens.

“If the RSP candidate can poll about 20 per cent, we will have a comfortable victory margin,” said a Trinamul insider.

John Barla, the BJP nominee, however, said he was confident of winning. “Prime Minister Narendra Modi is our biggest strength,” he said. 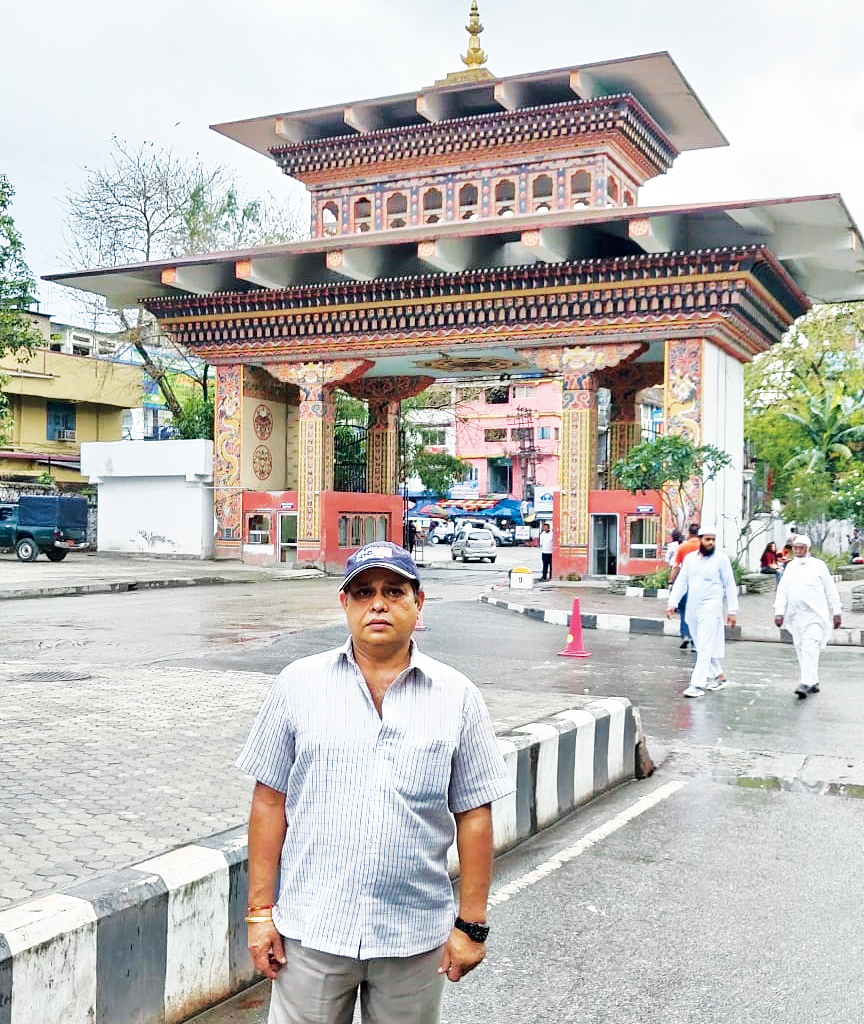 Ajay Sharma against the backdrop of the Bhutan Gate in Phuentsholing.
Picture by Devadeep Purohit

Sharma, a Rajasthani, said almost all these people, mostly businessmen, would cross the border and go to Jaigaon on Thursday to exercise their franchise as voters of Alipurduars Lok Sabha constituency.

The constituency, with over 16 lakh voters, is a study in contrasts.

Home to 80-plus tea gardens, of which 30-odd are sick, poverty is high in Alipurduar. On the other hand there is Jaigaon, where the going rate of commercial space can be compared with that of Siliguri, the main business hub of north Bengal.

Alipurduar has several closed and sick tea gardens from where people are migrating to other states in search of jobs, but it also has Jaigaon, which draws businessmen from across the country.

“But Jaigaon is still a panchayat... It surely deserves to be upgraded as a municipality,” said R.S. Gupta, general secretary, Jaigaon Merchants’ Association.

Narrow roads, poor traffic management, water scarcity and inefficient garbage disposal are the major problems in the town, which shares borders with Bhutan. Life on the other side of the border — spic and span roads, disciplined traffic movement, no fume-belching autorickshaws or plastic — is quite the opposite and residents rue the difference.

More than 60km away from Jaigaon at Dheklapara Tea Estate, closed since 2005, Sitaram Tanti is also awaiting a better life. He gets work barely four to five days a week at the tea garden, where a committee comprising workers engages labourers to pluck tea leaves for a daily wage of Rs 60. “Can anyone survive on Rs 60 a day?” asked the frail 64-year-old.

The same question resonates across several other closed tea gardens — such as Bandapani, Madhu, Tulshipara.

The condition of the tea industry is one of the major issues in Alipurduar; around 11 lakh of the 16 lakh voters are linked to this sector. While the BJP is blaming the Bengal government for the workers’ plight, the Trinamul, Left and Congress candidates are accusing the BJP-led Centre by referring to the promise then Union commerce minister Nirmala Sitharaman had made in 2015: that all closed tea gardens would be opened.

“Not a single garden has opened since then. Look at the plight of workers in the tea industry. What has the Centre done?” asked Mili Oraon, the Left-backed RSP candidate from Alipurduars.

A traditional RSP bastion because of its strong support base among the tea-garden workers — a majority of them from the tribal and Gorkha communities — the Alipurduars seat has become a battleground for the BJP and the Trinamul.