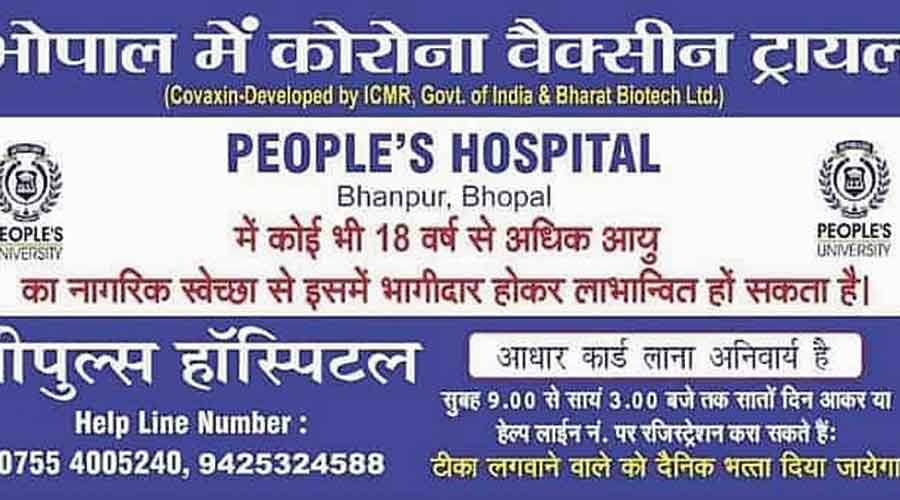 Four non-government health groups on Sunday urged the Centre to stop the clinical trial of the homegrown Covid-19 vaccine at a hospital in Bhopal, alleging irregularities and violations of ethics by investigators at that site.

The groups have claimed that the trial investigators and staff at People’s Hospital, Bhopal, had violated ethical guidelines by luring poor and educationally vulnerable people into the trial by telling them they would receive a vaccine and a compensation of Rs 750.

People’s Hospital is among trial sites nationwide that have enrolled participants for the efficacy trial of Covaxin, developed by the Hyderabad-based Bharat Biotech to determine whether it is able to protect people from the infection.

The principal investigator of the trial at People’s Hospital did not respond to phone calls from this newspaper. The hospital’s dean, Anil Dixit, however, told The Telegraph that all the due clinical trial protocols had been “followed adequately”.

One of the trial participants at People’s Hospital died on December 21, nine days after receiving the first dose. Bharat Biotech on Saturday said a post-mortem analysis had revealed that the death was not related to the vaccine.

Medical experts have questioned the silence of the drug regulatory agency on the death.

Now, the Bhopal Group for Information and Action and three other groups representing survivors of the world’s largest industrial disaster in December 1984 have alleged that the participant who died was one of dozens recruited from poor and vulnerable communities.

The groups, in a letter to Narendra Modi, health minister Harsh Vardhan and India’s drug regulatory authority, have urged a stop to the trial at People’s Hospital and sought an independent and transparent investigation into the trial process at the site.

They have underlined that People’s Hospital had recruited over 1,700 participants while a government medical college in Bhopal, another trial site, had enrolled only 100 participants.

“Such targeted enrolment of poorly educated, economically deprived and vulnerable communities is exploitation,” said Rachna Dhingra, an activist with the Bhopal Group for Information and Action.

Clinical trial guidelines set by the Indian Council of Medical Research specify that trial participants should not be offered incentives or rewards and should be adequately informed about the purpose of the trial and that participants may receive either vaccine or placebo.

But seven people who claimed they had received the vaccine at People’s Hospital told a news conference organised by the health groups that they were not told that they may receive either vaccine or placebo.

“They came in vans and said we would receive vaccines against corona and we would get Rs 750 — otherwise, why would I go?” asked a 70-year old man who claimed he had been enrolled. “I can’t read or write, but I can sign,” he added when asked about the informed consent form.

Bharat Biotech, which had outsourced the trial in India to a US-based multinational organisation, said the company believes the trial followed all protocols. It said the Rs 750 offered to the participants was reimbursement for the cost of travel or daily wages lost in visiting the site to receive the vaccine. This is not unique to Bhopal but offered to participants across the country.

But independent experts in ethics believe there was clear evidence of allurement. Anant Bhan, a bioethicist based in Bhopal and an adjunct professor at the Yenepoya Medical College, Mangalore, for instance, said he was troubled by advertisements he had seen posted by People’s Hospital.

“What we’re hearing from these participants and the ads I’ve seen are worrying,” Bhan said. “One ad focused on the possibility that there could be a potential benefit of joining the trial, without balancing that with the risk,” he said.