Centre accused of tying food for poor to flag purchase 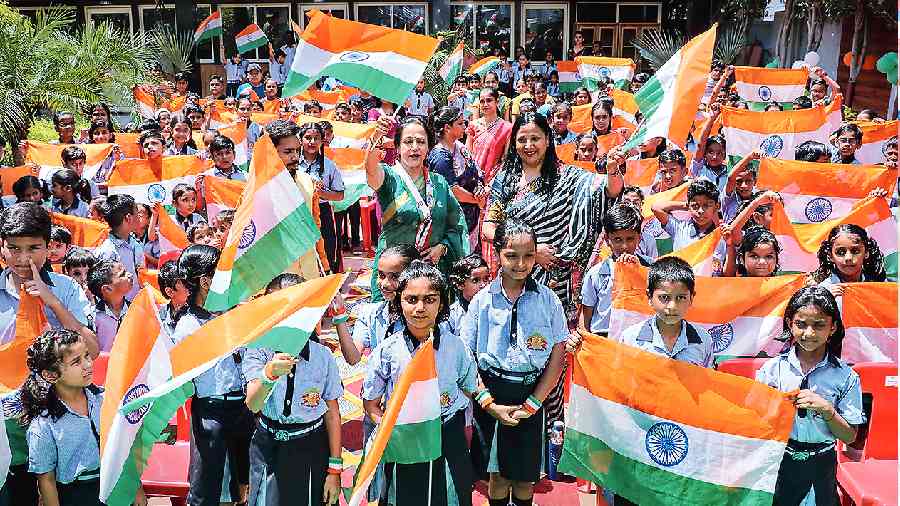 The Narendra Modi government has been accused of adopting a flag-for-food tactic to bully the poor into buying the Tricolour as part of its Har Ghar Tiranga campaign, after similar allegations of arm-twisting students, traders, government employees and private companies.

A video circulated on social media appears to show villagers in Haryana’s Karnal district alleging they were threatened with the denial of government-subsidised food grains if they refused to buy a Tricolour, priced at Rs 20. The BJP is in power in Haryana, and the Har Ghar Tiranga campaign is a pet project of the Modi government at the Centre.

A purported employee of a ration dealer appears to corroborate the charge, citing “a government order from the top”.

The video shows a man, whose appearance suggests extreme poverty, purportedly saying: “They are saying, ‘Buy the flag’. I don’t want the flag, I don’t have money. Ten to 20 people said the same thing just now: ‘We didn’t get work, from where would we bring the money?’”

A purported employee of a fair price shop then appears to say: “They have to pay Rs 20 for the flag. This is a government order from the top. I have been told by my boss not to give rations to those who refuse to buy the flag. I have instructions to tell the people that rations won’t be given without flags.”

A woman holding the flag purportedly says: “I was forced to buy the flag. He said Rs 20 would have to be given.”

Another woman, also holding a Tricolour, cuts in to say that “5kg of rations” was deducted from her share because she couldn’t pay Rs 20 for the flag.

With the video attracting condemnation from thousands of netizens, the district food and civil supplies authorities suspended the dealer’s licence, saying he had misled consumers and that there were strict instructions not to force the poor to buy the Tricolour.

The clarification itself raises questions about the government’s intent, implying a plan to sell the national flag at ration depots while leaving it to the staff to decide which ration seeker can or cannot afford it.

Media reports have over the past few days suggested that the food and civil supplies department distributed 64,600 national flags among ration dealers to be sold for Rs 20 each. If anyone wants a flagpole too, they have to pay up another Rs 4.

Rahul posted the video on Facebook with the message: “Tricolour is our pride, it resides in every heart. Nationalism can never be sold, it is very shameful that instead of giving ration, 20 rupees are being collected from the poor in the name of Tricolour. Along with the Tricolour, the BJP government is also attacking the self-esteem of the poor of our country.”

The Congress had earlier alleged that the government’s amendment of the Flag Code to allow Tricolours of polyester — instead of only hand-spun khadi — was meant to help a capitalist friend of Prime Minister Narendra Modi who makes polyester.

Varun too posted the Karnal video on Twitter with a comment: “It will be unfortunate if the celebrations of the 75th anniversary of freedom become a burden on the poor.”

He added: “Consumers are either being forced to buy the national flag or their quota of rations is being reduced. Extracting the price of the national flag that lives in every heart by denying food to the poor is shameful.”

A similar controversy had broken out in Jammu and Kashmir last month, with government schools in Anantnag district instructed to collect Rs 20 from every student of Class VIII to XII as payment for a national flag. By the time a furore led to the order’s withdrawal, school principals said, most of the money had been collected.

This was followed by a video that purportedly showed traders at an Anantnag marketplace being ordered through a loudhailer to pay up for the Har Ghar Tiranga campaign or face “action”. The authorities later said this was a “voluntary effort” and that those responsible would be disciplined.

Some reports have suggested pressure on big pharmaceutical companies to purchase national flags in bulk and ask their clients to do the same. Some companies were allegedly asked to use their CSR (corporate social responsibility) funds to buy Tricolours.

A report said Rs 38 would be deducted from the salaries of railway employees towards the Har Ghar Tiranga campaign. Some unions have protested, arguing that employees could very well buy the Tricolour on their own if they wanted to.

Social media has been divided on the subject, with some BJP supporters wondering why the poor can buy “gutka” but not the national flag.

Others have argued that hoisting the national flag cannot be made mandatory, and noted the irony that the ruling BJP’s parent organisation, the RSS, had refused to embrace the Tricolour for half a century.

As for the nod to polyester Tricolours, the Karnataka Khadi Gramodyog Samyukta Sangh, the country’s sole manufacturer of khadi Tricolours with a Bureau of Indian Standards certificate, says this would hit the khadi industry that employs thousands of poor workers.

It has added that the hastily made polyester Tricolours that have flooded the market are blighted by errors, from incorrect length-breadth ratio to wrongly placed Ashok Chakras — a point CPI member P. Sandosh Kumar has raised in the Rajya Sabha.

The Congress has alleged the polyester flags violate the spirit of the freedom movement.