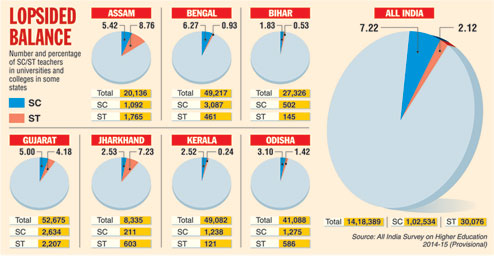 The grim statistics - included in a government report released last month -leap to relevance against the backdrop of the suicide of Rohit Vemula, the research scholar in the University of Hyderabad.

Suggestions have been made that the young man may not have taken his life had his concerns been addressed by teachers who empathise with the sensitivities of students from disadvantaged sections.

The chances of Dalit teachers making committees that look into disciplinary issues are remote because the numbers are stacked against such a probability.

The faculty figures fall far short of the national population of Scheduled Castes (16.6 per cent) and Scheduled Tribes (8.6 per cent).

In Bengal, the percentage of SC/ST teachers, according to the All India Survey on Higher Education Provisional Report for 2014-15, was even less - 6.27 per cent Dalit and 0.93 per cent from the Scheduled Tribes.

Referring to Rohith, Prof. Sudhakar Babu, convener of the university's SC/ST Teachers' Forum, said a Dalit member on a panel that looked into an alleged assault on the Hyderabad campus "would have demanded a proper probe".

It was this sub-committee that had recommended that Rohit and four others be punished, setting off a chain of events that culminated in the tragedy on January 17.

The sub-committee had no SC/ST member but did co-opt a Dalit professor, Prakash Babu, the dean of students' welfare. But Prakash Babu, Sudhakar Babu said, did not protest the sub-committee's decision as he was present in his official capacity, not as a Dalit representative.

Dalit rights activist Gurindar Azar said teachers from other communities, who have seldom faced discrimination, "fail to feel the problems of Dalit and tribal students, most of whom are first-generation learners and are low on confidence".

Rohith's fellowship money, Ilaiah said, was blocked for seven months for no reason other than harassing him. The University of Hyderabad is yet to release his dues of about Rs 1.75 lakh.

University sources cited red tape, saying Rohith had been getting a junior research fellowship when he qualified for a CSIR fellowship in the second year, which led to confusion over which scholarship money he should get. The university wrote to higher education regulator UGC and, in the process, the money got delayed, the sources claimed.

Ilaiah hinted that if it were a case involving an upper-caste scholar, the whole system would have come forward to help.

Official sources cautioned against rushing to judgement on the basis of the faculty figures. They pointed out that half of the nearly 39,000 institutions are privately managed and are thus out of the quota system.

But government-run universities and colleges are legally bound to reserve 15 per cent teacher posts at all levels for Dalits and 7.5 per cent for Scheduled Tribes.

Delhi University executive council member Abha Dev Habib said that of the 813 faculty members, only 63 (7.7 per cent) were Dalits and 24 (less than 3 per cent) were from tribal groups. "Our teacher association has written to the HRD ministry and the UGC about non-implementation of reservation in DU. But no action has been taken," Habib said.

The question of poor representation of SC/STs in faculty has been raised in Parliament several times. Every time, the government has said posts have remained vacant because of non-availability of suitable candidates in these categories.

But some academics said the word "suitable" was being used subjectively and discriminately at the interview level to shut out candidates from the disadvantaged sections, leaving the posts vacant.

Ilaiah cited his own example to point out how he too had suffered in an upper-caste dominated system when he taught in Hyderabad University in 1998. His application for a professor's post, he recalled, was ignored while another teacher with fewer publications was considered because "she was from an upper caste".

It was only in 2011 that professor posts were brought under reservation - one of the reasons for the poor Dalit representation in the pool from which vice-chancellors are eventually chosen.

Sources in the human resource development ministry confirmed that none among the 43 central universities in the country had a Dalit vice-chancellor. Only one - the Indira Gandhi National Tribal University in Amarkantak, Madhya Pradesh - had a VC from an ST community, Professor T.V. Kattimani.

There are no overnight solutions. P.S. Krishnan, a former secretary to the erstwhile welfare ministry with experience on reservation matters, pointed out that the only solution was to ensure that the pool was widened.

"The pool is limited because implementation of reservation at all levels of teaching posts is much less than the norms. Among all the serving SC/ST teachers, the majority are in the category of assistant professors," he said.

"Even if some people are selected, they face hurdles in promotion. The government and institutions need to sincerely follow the quota policy," Krishnan said.