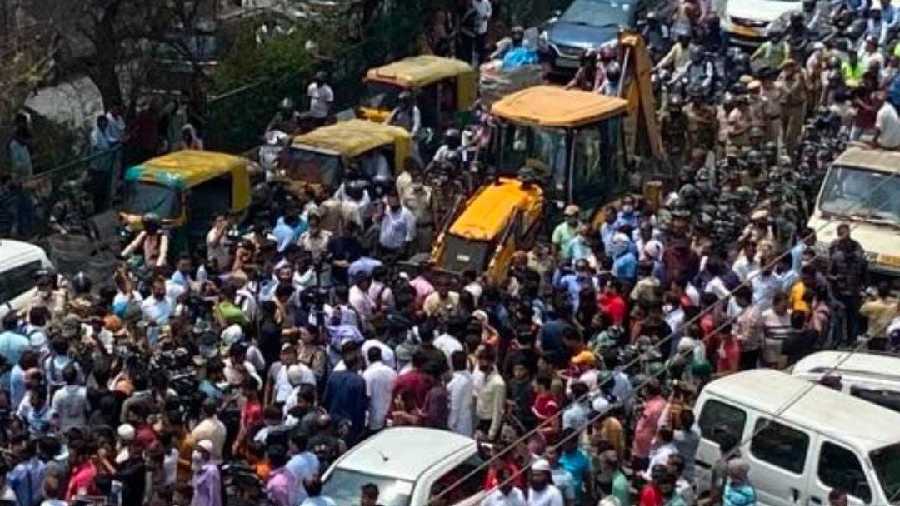 The Supreme Court Monday refused to entertain a plea filed by CPI(M) against the demolition drive by South Delhi Municipal Corporation in Shaheen Bagh here, saying it cannot interfere with the anti-encroachment drive at the instance of a political party.

A bench of Justices L Nageswara Rao and B R Gavai asked the party to approach the Delhi High Court.

Why is CPI(M) filing a petition? What is the fundamental right that is being violated? Not at the behest of political parties. This is not the platform. You go to the high court, the bench said.

At the outset, senior advocate P V Surendranath, appearing for the petitioner, submitted that the plea has been filed in the public interest and there is no "party interest" involved in the matter.

He further submitted that the second petitioner is a hawkers' union and they are being removed without notice.

The bench said that if hawkers are encroaching they will be removed and in case there is any violation of law by authorities, the petitioner can go to the High Court.

The top court clarified that it interfered in the Jahangirpuri demolition case because structures were being demolished.

The senior lawyer said the authorities are demolishing buildings.

We don't know what are they demolishing. Hawkers also put up structures and as far as we know they sit on platforms. Let the affected party come, the bench said.

Solicitor General Tushar Mehta said the facts are being misrepresented.

This is a process which has been going on for long, a routine exercise after serving notice, he said adding that this is only a political hype.

Mehta further submitted that as per the Municipal Corporation Act, no notice is required to be served to remove encroachments on public roads.

He said that the action has been taken based on certain orders passed by the High Court after resident groups complained of encroachments.

When the senior advocate referred to the apex court's recent orders on Jahangirpuri where the demolition drive was stayed, the bench said let the affected parties come.

The senior counsel that when the apex court is seized of the matter, the authorities have started the process of demolition.

We are not seized of all encroachment matters. Even in the Jahangirpuri matter, we told Mr. Kapil Sibal we can't pass orders against all encroachments. We have to strike a balance, the bench said.

We have not given license to anybody to come here to say my house cannot be demolished even if it is unauthorized. You cannot take shelter of that order. We cannot interfere...that too at the instance of political parties, the bench said.

Surendranath stated that the high court will not take up the matter.

Reprimanding the senior lawyer, the apex court said, This is not right Mr.Surendranath. Filing petitions like this. You spent the whole day here and you could have gone to the High Court instead. This is too much... some party coming to us and telling us high court won't hear".

"How can you say the high court will not take up. This is showing disrespect to the high court. They have wider power under Article 226", the bench said.

We can understand if you go to the high court and it refuses to hear..but you don't even go there and straight away come to the Supreme Court, the bench said.

When the senior lawyer requested that the demolitions be stayed for two days, the bench refused to pass the order.

Not at your behest. You mention tomorrow in the high court. Mr. Solicitor General, please don't do anything till tomorrow, the bench said.

Mehta informed the court that whatever had to be removed had been removed before the matter was mentioned.

They just want to create headlines that Supreme Court saved the area from demolition", Mehta said.

The matter was dismissed as withdrawn with liberty to approach the Delhi High Court.

The senior counsel appearing for the petitioner after arguing for sometime seeks permission to withdraw this petition to approach the High Court under Article 226. Permission granted. Writ Petition dismissed, the bench said in its order.