Worry for soul, hope of peace 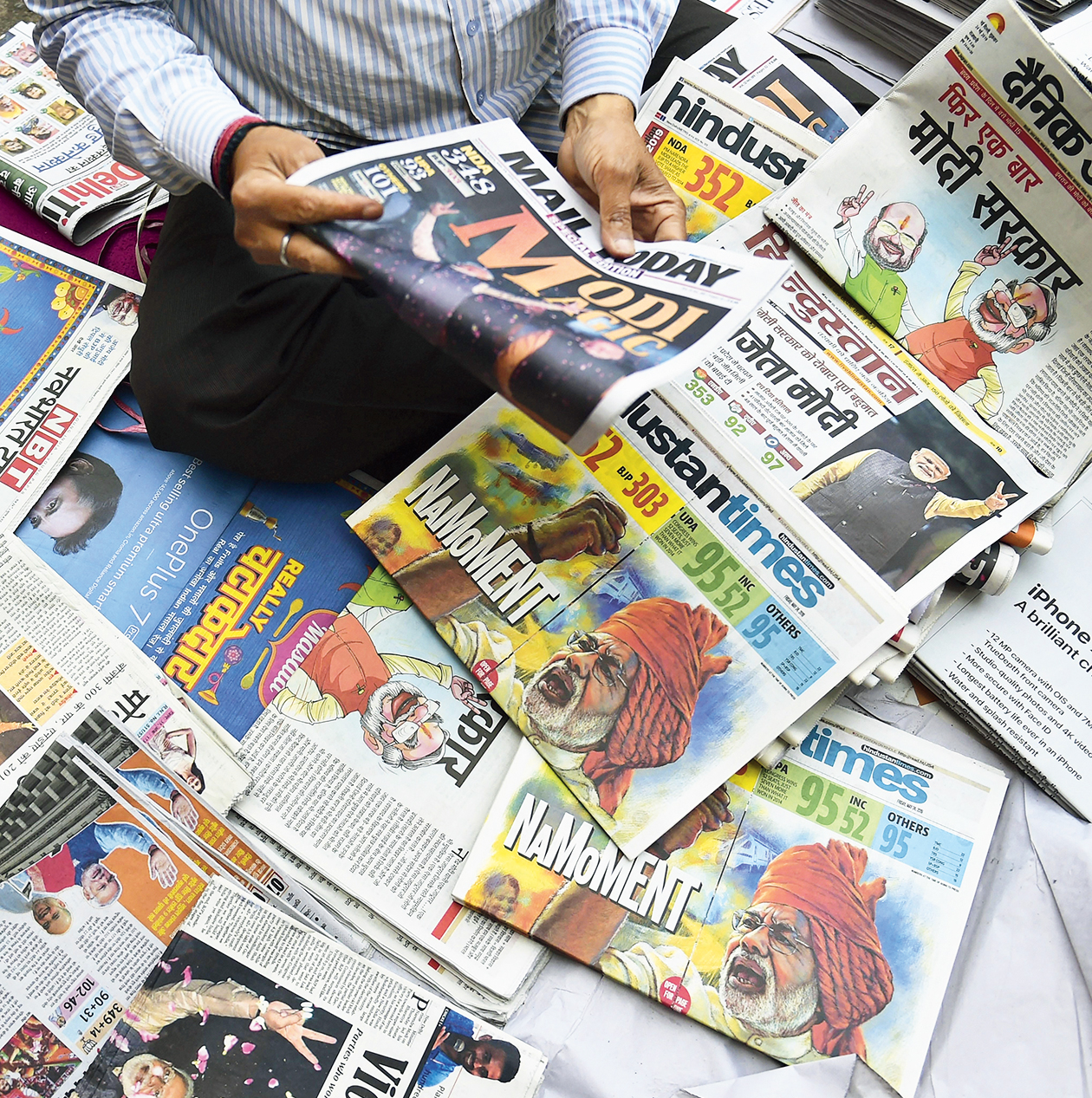 Narendra Modi’s landslide win is “bad for India’s soul”, says The Guardian, while The Financial Times is more measured and recommends that “India’s re-elected premier must focus his efforts on modernising his country”.

A comment piece in The Daily Telegraph predicts that “Modi’s crushing election majority may make peace with Pakistan more likely”.

The Economist is more critical and offers ideas on “what Narendra Modi should do next”.

“India’s ruling party has won a huge victory,” it says. “If only it governed as well as it campaigns….”

Meanwhile, the Labour party’s shadow trade secretary, Barry Gardiner, who is the member of parliament for Brent North, a constituency with a large Gujarati population, has been taken to task for tweeting: “As Indian Prime Minister Narendra Modi wins a second term we congratulate him for his message: ‘Our alliance represents India’s diversity and our agenda is India’s progress.’ celebrating the country’s diversity.

“I look forward to deepening our friendship and trade.”

There was a typical response from one Alex Otway: “On the day that Labour is fighting on a platform of rejecting the far right, how is it acceptable or credible for a shadow secretary of state to congratulate Modi without condemning his agenda of tearing down secular state institutions and nurturing attacks on minorities?”

Gardiner, it has to be said, has been a supporter of Modi from the latter’s early days as Gujarat chief minister and is more in tune with the UK’s large Gujarati community which had no problems in filling Wembley stadium for the visiting Indian Prime Minister in November 2015.

Modi’s critics in the UK, especially in Left-leaning academic circles, are more in tune with The Guardian, which has never been a Modi fan. It says: “The world does not need another national populist leader who pursues a pro-business agenda while trading in fake news and treating minorities as second-class citizens.

“In 2014 the Bharatiya Janata Party won an absolute majority in the lower house of parliament for the first time in its history after the Congress party’s appeal vanished in a haze of corruption. Despite a spluttering economy five years later, Mr Modi seems certain to have expanded his parliamentary majority. This is bad news for India and the world.

“The BJP is the political wing of Hindu nationalism, a movement that is changing India for the worse. Little wonder, as it stands for the flagrant social dominance of the upper castes of Hindu society, pro-corporate economic growth, cultural conservatism, intensified misogyny, and a firm grip on the instruments of state power. The landslide win for Mr Modi will see India’s soul lost to a dark politics — one that views almost all 195 million Indian Muslims as second-class citizens.”

The Guardian does add that “the Congress party and the Nehru-Gandhi clan that leads it will have to seriously rethink how they can defeat Mr Modi.… The opposition will need to be able to run a distinctive campaign on an egalitarian platform. To be fair, Congress did peddle, but without much vim, a form of universal basic income. Fights over symbolic aspects of identity need to be replaced by political competition over how to benefit all Indians. That will require an opposition in India far savvier and more in touch with the country’s poor than exists today.”

While The Financial Times expresses concerns about Modi similar to those highlighted by The Guardian, it concludes that “his reformist energy also raises hopes for poverty reduction and social progress.

“The formation of a new administration should be seized as an opportunity to showcase Modi the moderniser — and to downplay the nationalism that helped secure him a second mandate.”

In The Daily Telegraph, an article by Gareth Price, senior research fellow, Asia-Pacific Programme, at the Royal Institute of International Affairs, argues: “Narendra Modi may have railed against Pakistan, taking India to the brink of war as he sabre rattled his Hindu nationalist party to election victory.

“But his increased majority could ironically bring the prospect of peace talks closer than at any point since the 2008 Mumbai attacks.

“The lingering possibility of war with Pakistan may now be surplus to requirement for Modi after such a strong showing at the polls. If Pakistan can overcome its need for an existential threat from India, the observation from Imran Khan, its prime minister, that a BJP victory increases the prospects for peace between the two neighbours may well be correct.”

At the moment, Britain, obsessed with Brexit, has little time to devote to foreign affairs. But whoever succeeds Theresa May as Prime Minister will be pragmatic and continue to deal with Modi, especially as post-Brexit Britain will want to conclude free trade agreements with as many countries as possible.

With India, which seeks parity with China on visas and easier entry for students — there was very little give from May — it is not going to be easy.