Quran, Gita, Bible and Constitution on ‘mehr’ list of 100 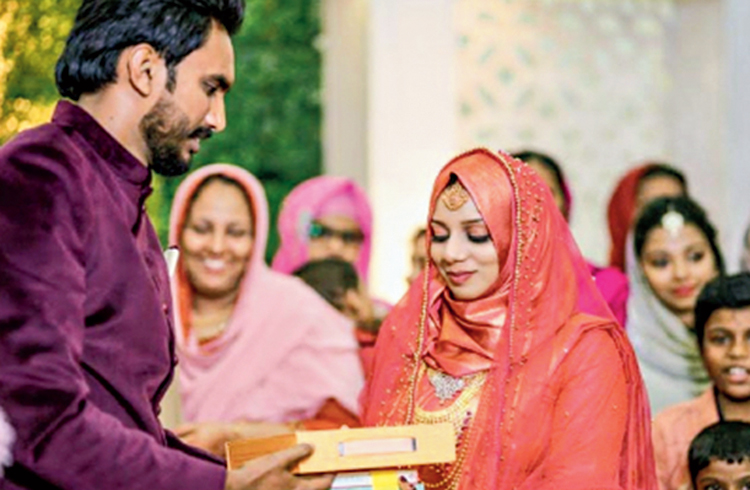 A bride from Kerala demanded and got 100 books as mehr — a mandatory gift Muslim girls are empowered to ask for at the time of marriage.

The gift she sought from her would-be husband ahead of the wedding last month sent out a message of communal harmony and also showed that women can exercise their choice when it comes to naming their mehr.

Among the books Ajna Nazim, 24, received were the Quran, the Gita, the Bible and the Constitution of India.

“In our community girls have the right to demand whatever they want as part of their mehr. But usually expensive jewellery and cash are seen as mehr,” Ajna, a BEd student with a master’s degree in chemistry, told The Telegraph.

“It’s a religious custom that empowers the bride to seek whatever she wants to agree to the alliance. So when I was asked about the mehr I would like, I asked for books.”

Her husband, Ijas Hakkim, 26, a civil engineer with the national rural employment guarantee scheme in Madavoor, a gram panchayat in Thiruvananthapuram, said he had immediately agreed.

“She reads a lot. I am not into heavy reading, but I immediately agreed since by doing so both of us would be setting an example. What my wife asked for was something very precious to me.”

It was also a message about what mehr means, Ijas said, adding the Quran permitted it. “At least this way we would be sending across a message on what mehr actually is and the value of communal amity.”

Earlier, in 2016, another bride in Kerala had also defied the norm by demanding books as her mehr. Sahla Nechyil, from Malappuram, eventually got the books from her husband.

Ajna and Ijas, who got married on December 29 in Kollam, had kept the mehr a private affair but the wish list and the groom’s response eventually made it to social media a few days ago.

“The list of books is also our own little way of expressing (what we feel) in these difficult times,” he said, alluding to the Citizenship (Amendment) Act and the planned countrywide rollout of the National Register of Citizens.

The two are not the only bride and groom in Kerala who have sought to send a message against the controversial measures. Many couples who recently got married in the state, which has moved the Supreme Court against the act, tied the knot holding placards against the amended law and the NRC.

Some brides even tweaked their mehndi designs to include the words “No CAA, No NRC”.

But the 100-book list must have taken a while to decide?

The number apparently developed as Ajna prepared the list with the help of friends. Among the books she asked for were those by Afghan-American novelist Khaled Hosseini, Japanese author Haruki Murakami and Michelle Obama’s Becoming, which the former US First Lady describes as a deeply personal account.

Ijas said he sourced the books from Thiruvananthapuram, Kollam and Kozhikode.

Not all the books Ijas gifted his wife are new as both decided some of them could be bought second-hand too.

“I managed to get a lot of used books as well keeping in mind the recycling aspect,” Ijas said.

The young couple agreed it would take a long time to read all the 100 books.

“I have created a library in my room to stock the books so that they can be maintained properly,” he said.

While the books would remain in their private library till they are read, Ijas plans to donate them for a social development project he had joined with friends in a Rajasthan village.

“Since parents go for work, their children are left with no basic education. So we started something called a Digital Self-Learning Space. At a later date, we can donate these books to enhance the scope of the project,” Ijas said.