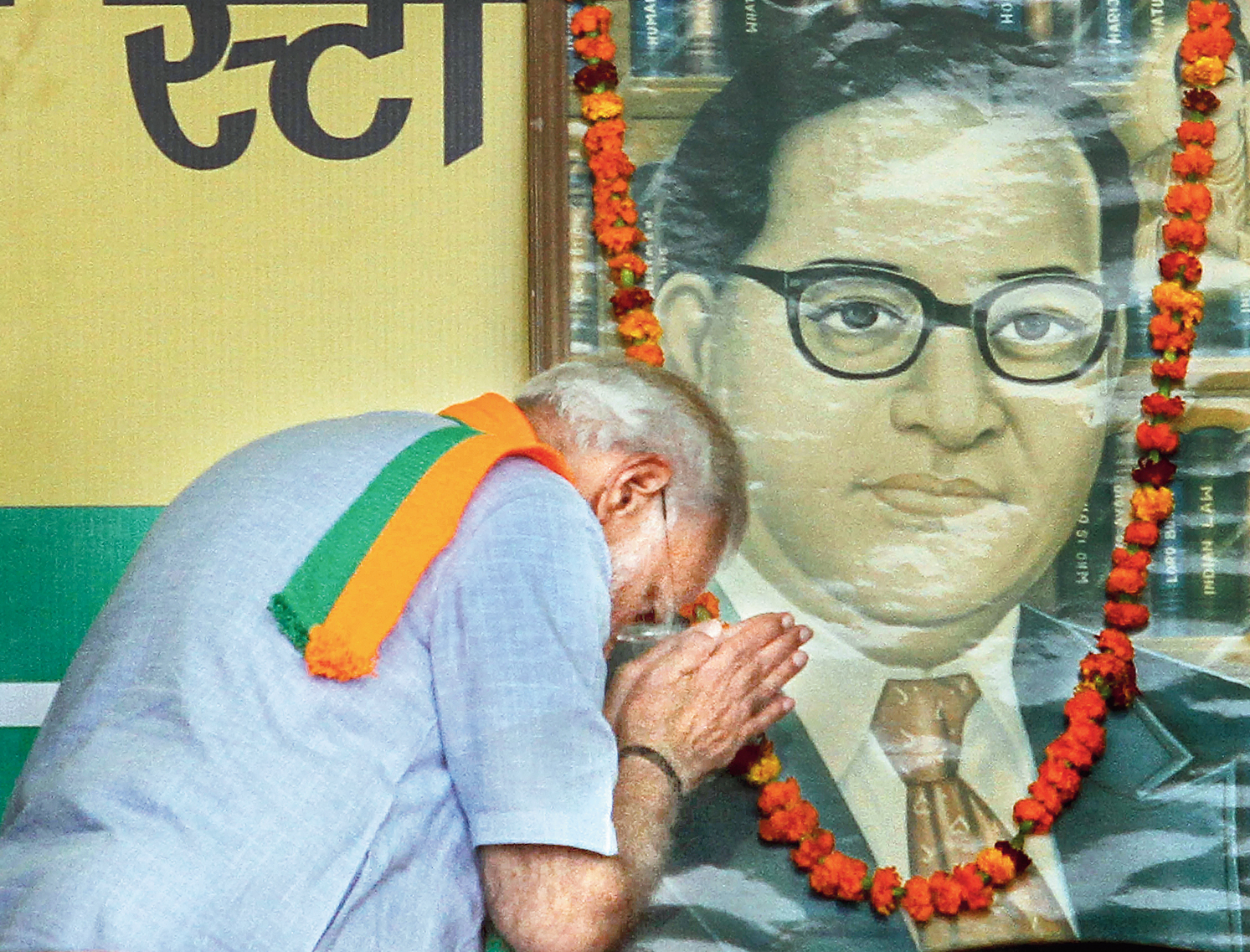 The Narendra Modi government stopped printing the Collected Works of Babasaheb Dr Ambedkar in English after coming to power in 2014, it has emerged, although the Prime Minister regularly hails the Dalit icon in his public speeches and accuses the Congress of sidelining him.

Ambedkarite writers and activists termed the government’s action an “ideological assault”. They said the BJP and the RSS had always been hostile to Ambedkar’s questioning of Brahminical ideas and the caste hierarchy, as in his book Riddles in Hinduism.

However, an official source blamed a copyright case lodged by Ambedkar’s grandson Prakash Ambedkar against the Maharashtra government, which had been the first to publish many of Babasaheb’s works.

Ambedkar, whose 128th birth anniversary on Sunday evoked a homage from Modi, “relinquished Hinduism and embraced Buddhism — he said he was born a Hindu but would not die a Hindu”, said Pramod Ranjan, editor of Forward Press, a monthly magazine that publishes articles on issues of social justice.

“He was a critic of Hindu practices and the graded inequality perpetuated by the scriptures through the caste system. The RSS believes in caste hierarchy and Brahminism and never tolerated him. That is why the government is setting up memorials in his name but not printing his books.”

When Kumari Selja was the social justice and empowerment minister during UPA rule, the Dr Ambedkar Foundation, a central government institution, had taken up the project of translating and publishing Ambedkar’s writings and speeches in English and seven Indian languages.

Maharashtra’s education department had already brought out Ambedkar’s unpublished works in English and Marathi. The state government gave the Foundation permission to include its English volumes in the Collected Works.

In 2013, the Foundation published all of Ambedkar’s works in English in 20 volumes. It also proposed to publish translated versions in seven Indian languages in 40 volumes, which are in various stages of progress.

But, after the English Collected Works were exhausted within a few months, the Foundation never reprinted any of the volumes despite a steady demand. The official source who spoke to The Telegraph said the Maharashtra government too had stopped printing its 17 English volumes of Ambedkar’s works.

He said these books had become popular among Dalits, who gifted them to one another during weddings or community get-togethers.

“This government doesn’t want people to read about Ambedkar. They want to make Ambedkar a symbol of worship only. That is why they are setting up the Panchteerth while stopping the printing of his books in English,” Mandal said.

The Modi government is developing five sites related to Ambedkar’s life as “Panchteerth” (Five Centres of Pilgrimage). These are his birthplace in Mhow (Madhya Pradesh), the house in London where he stayed as a student, Deeksha Bhoomi (where he converted to Buddhism) in Nagpur, Mahaparinirvan Sthal (where he died) in Delhi, and Chaitya Bhoomi (a memorial) in Mumbai.

At an election rally on Sunday, Modi claimed that his rise from “tea seller” to Prime Minister was made possible by Ambedkar.

“It’s the strength of Babasaheb’s Constitution that a gentleman hailing from a deprived and exploited class has become the President (Ram Nath Kovind), while the Vice-President (M. Venkaiah Naidu) is from a farmers’ family,” he told a crowd in Aligarh, PTI reported.

“Thanks to Babasaheb’s Constitution, a chaiwala (tea seller) is holding the Prime Minister’s post.”

The official source who spoke to this newspaper said the Foundation stopped reprinting the English volumes only after the Maharashtra government withdrew permission in March 2014 without citing any reason.

He said the Union minister of social justice and empowerment, Thaawarchand Gehlot, had written to chief minister Devendra Fadnavis in 2015 seeking renewal of the permission, but no response had come yet. Maharashtra has had a BJP government since October 2014.

The source said that Prakash Ambedkar had moved court in “2013 or 2014” seeking royalties for the Ambedkar volumes published by the Maharashtra government in English, and that the case was still unresolved. Calls by this newspaper to Prakash Ambedkar were not answered.

An email was sent on Thursday to Vandana Krishna, additional chief secretary with the Maharashtra school education department, seeking the reason for the withdrawal of permission to the Foundation and the steps taken to settle the copyright dispute. No response has been received.

Ranjan, the Forward Press editor, alleged the BJP governments in Maharashtra and at the Centre may be using the copyright case as a “ploy” to stop printing the Collected Works.

An email sent on Thursday to Nilam Sawhney, Union social justice and empowerment secretary, seeking the government’s reaction has evoked no response.

After publishing the Collected Works in English, the Foundation had begun selling them from its own outlets and from camps set up for the purpose. But, the official source said, many private booksellers bought the subsidised books in bulk to sell them at higher prices, “which was one reason the Foundation’s stocks were exhausted within a few months”.