According to sources, the saffron party will be booking several other hotels for its senior leaders campaigning in Calcutta for the upcoming Assembly elections 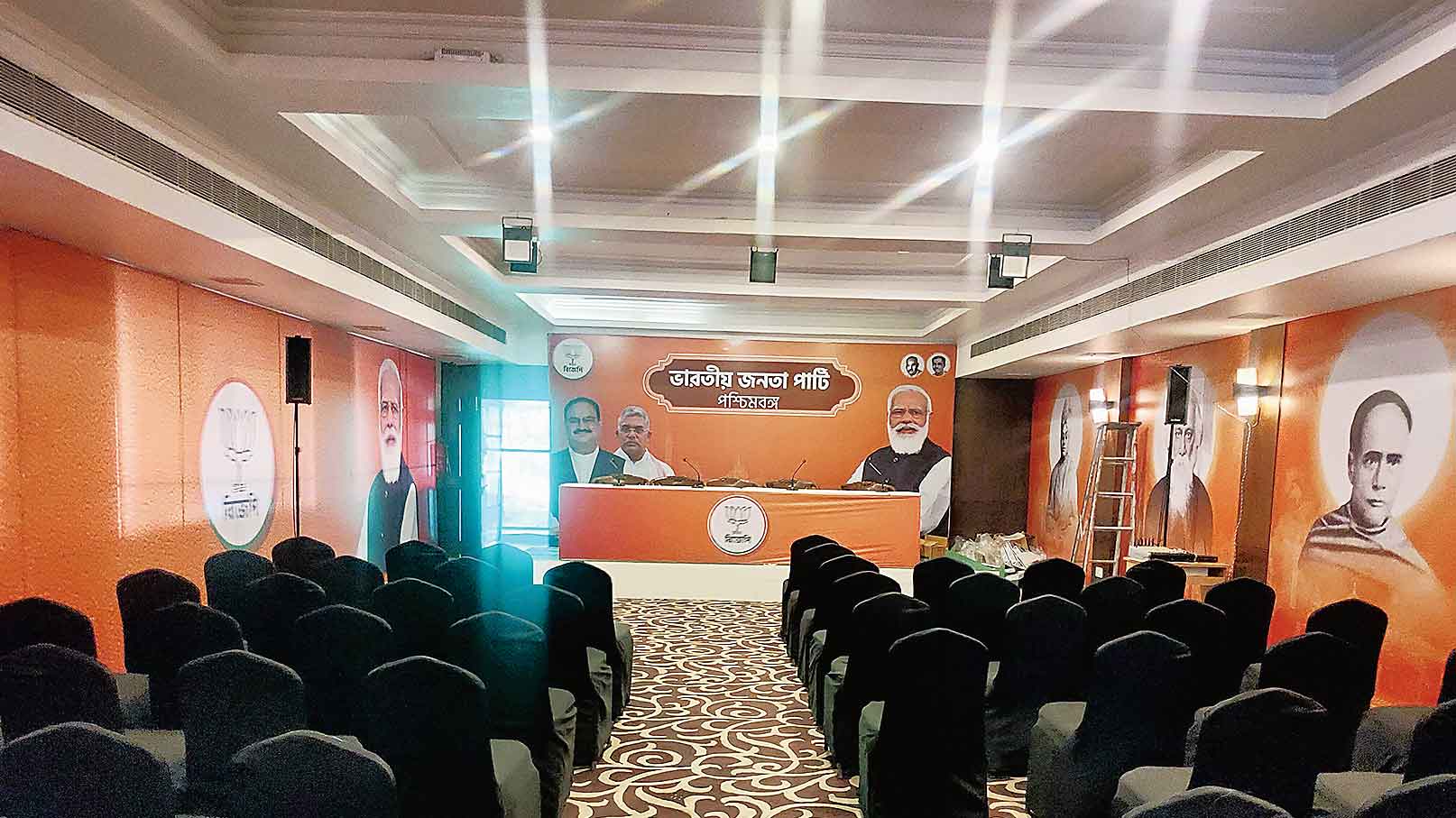 If the chariot is a BharatBenz, where will the charioteers check in to blow the conch shells?

A five-star hotel, of course.

The BJP will micro-manage its Bengal poll campaign from the luxury of a five-star hotel — an uncommon choice in the state.

The BJP’s Bengal unit is setting up a “media centre” at Hotel Hindusthan International (HHI).

“We are booking several rooms at HHI, where our leaders coming from various parts of the country and state will stay and hold meetings till the Bengal elections are over,” a BJP leader said on the condition of anonymity.

“A part of the hotel will be used as a media centre where news conferences will be held.” HHI officials said they were not aware of any bulk booking.

Another source in the BJP said the party would book rooms in several other hotels ahead of the polls as several senior leaders would be camping in Calcutta.

There is nothing unlawful about political parties working out of hotels. Hotels have been linked with political bases in the past — the most famous in the world was Watergate in the US, the complex where the eponymous hotel and the Democratic National Committee headquarters was located when the scandal that felled Richard Nixon broke.

But it is not a familiar feature in Bengal. Political rivals took swipes at the BJP, calling it a party of the rich and saying the Election Commission should keep an eye on its poll expenses and sources of funds.

BJP old-timers expressed surprise at the party’s decision, seeing it as antithetical to the RSS ideals of austerity and alien to Bengal’s political culture. They expressed the fear that such “extravagance” would not go down well with an electorate that had never seen elections being managed from a hotel.

The rath that BJP national president J.P. Nadda had flagged off in Birbhum last week was a BharatBenz vehicle, according to data associated with the registration number. BharatBenz is a brand of Daimler India Commercial Vehicles, a subsidiary of the German manufacturer Daimler AG.

“For several months now, the party has been operating from a new address at Hastings on Calcutta’s southern fringes. The party has leased four floors in the building, which is enough space to oversee elections,” a party member of 20 years said.

“We can’t understand the need to additionally rent a luxurious address. In elections outside Bengal, the party does rent hotel rooms; the same culture is being replicated here.”

The state BJP’s social media and IT teams operate from the building at Hastings, where almost every leader, including Trinamul Congress turncoat Rajib Banerjee, has a designated room. Sources said meals for at least 250 people are prepared at the Hastings office every day.

Renting a host of rooms at star hotels in the run-up to elections became the norm for the BJP ever since the current crop of leaders replaced the generation of Atal Bihari Vajpayee and L.K. Advani.

During last year’s Bihar elections, the BJP had booked a portion of a hotel in Patna where its senior leaders and star campaigners stayed during visits to the state. The party’s media centre too operated from the hotel.

Several visiting seniors from Delhi and elsewhere, however, chose to stay at another luxury hotel near the Gandhi Maidan in Patna.

In addition to renting the Hastings address, the Bengal BJP has renovated its headquarters, 6 Muralidhar Sen Lane, in central Calcutta. Apart from offices for leaders, the building houses a call centre for the party’s Calcutta zone.

Once the election dates are announced, journalists will be restricted from entering the Hastings office and all news conferences will be held at Hotel Hindusthan, sources said. The BJP will also rent two upscale guesthouses in Calcutta with the elections in mind, they added.

Political scientist Biswanath Chakraborty could not remember any political party renting a portion of a five-star hotel to supervise election management in the state before.

“This is unprecedented. I can’t remember any political party booking rooms in a five-star hotel on a long-term basis for poll management,” he said. “However, this is the first time in 10 years that the Trinamul Congress is pitted against a party that can challenge it, not just politically but financially too.”

Trinamul spokesperson Saugata Roy said: “This only shows that the BJP is a party of the rich. It has no connection with the poor. However, its expenditures will go in vain; it will lose the election.”

“The BJP’s culture of five-star politics has set in since the advent of (Narendra) Modi and (Amit) Shah,” he said. “The money is coming from opaque sources like electoral bonds…. The hypocrisy is telling: BJP leaders check in at star hotels while indulging in the optics of eating at the homes of poor villagers.”