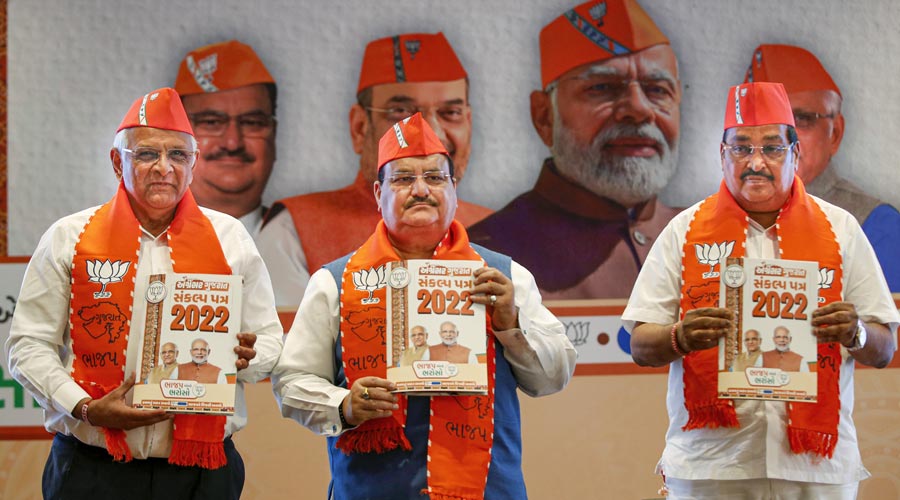 The ruling Bharatiya Janata Party (BJP) on Saturday released its manifesto for the upcoming Gujarat Assembly polls and promised to implement the Uniform Civil Code (UCC) and also create an 'Anti-radicalisation Cell' to identify and eliminate potential threats as well as sleeper cells of terrorist organisations and anti-India forces.

The party's other promises include creation of "20 lakh employment opportunities" and take the state's economy to USD one trillion in the next five years.

The annual cover under the Pradhan Mantri Jan Arogya Yojana (Ayushman Bharat) being doubled per family from Rs 5 lakh to Rs 10 lakh, and girls getting free education from "KG to PG" (kindergarten to post-graduation) are among other promises in the manifesto.

"We will ensure complete implementation of UCC in Gujarat as per recommendations of a state government committee. We will also create an Anti-radicalisation Cell to identify and eliminate potential threats, and sleeper cells of terrorist organisations and anti-India forces," said Nadda.

On October 29, the Gujarat government had announced that it would form a committee for the implementation of the UCC. The decision was taken in a cabinet meeting that day.

The manifesto also promised enactment of the 'Gujarat Recovery of Damages of Public and Private Properties Act' to recover the cost of damage caused to public and private properties by anti-social elements during riots and protests.

Talking about farmers, Nadda said the BJP, if voted to power, will spend Rs 10,000 crore for the overall development of APMCs, mandis, sorting and grading units, cold chains, warehouses and processing centres, while Rs 25,000 crore will be spent to strengthen the irrigation network.

"We will build a Devbhumi Dwarka Corridor to establish it as western India's biggest spiritual centre. It will have the world's tallest Sri Krishna statue, ED immersive Bhagwat Gita zone and a viewing gallery for the lost city of Dwarka," the manifesto stated.

The state will see two-phase Assembly polls on December 1 and 5, while the votes will be counted on December 8. It is witnessing a three-cornered fight with the BJP, Congress and Aam Aadmi Party (AAP) in the fray.