BJP wants him to drop issues related to Article 370, Uniform Civil Code and the construction of a Ram mandir in Ayodhya 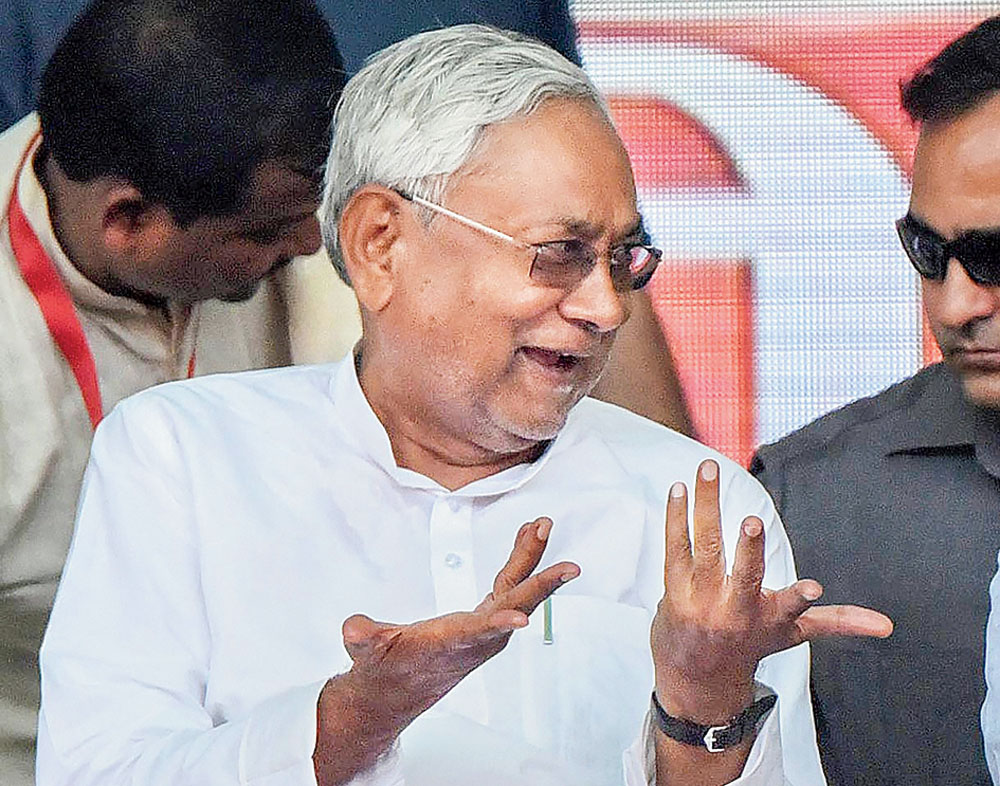 Bihar chief minister and JDU boss Nitish Kumar is under insistent pressure from his domineering ally, the BJP, to drop key commitments from his manifesto and align it closer to the Sangh parivar worldview.

The three issues the BJP wants him to drop relate to Article 370, the Uniform Civil Code (UCC) and the construction of a Ram mandir in Ayodhya.

Nitish and the JDU have hitherto held a different position from the BJP on all three — they have vowed to protect Article 370, which guarantees special status to Jammu and Kashmir, and the UCC, which is an article of faith for the Muslim minority; they have also never toed the BJP line on endorsing the construction of a Ram temple in Ayodhya.

But hectored by the BJP to go silent on all the three issues, the JDU leadership has been thrown in a quandary: does it submit to the demands of the BJP, or risk their ire in the middle of a critical election?

The JDU manifesto has been drafted by a team comprising party general secretary K.C. Tyagi and national spokesperson Pavan Varma, and makes a mention of all the three issues “in keeping with our traditional secular line of inclusive growth”.

The manifesto was to have been released on April 14, but its unveiling has remained inexplicably withheld. Reliable JDU sources have told The Telegraph that it is the BJP’s last-minute demand on key and critical changes that has kept the release in abeyance.

One of the authors of the stalled manifesto, Tyagi, has in fact been summoned to Patna from Delhi by Nitish on how to deal with the BJP diktat.

The chief minister, the sources indicated, was “not averse” to “going silent” on the three issues but others, including Tyagi, were reluctant to play ball, arguing that it would mean “complete ideological subjugation” to the BJP and the Sangh.

Nitish, and his senior colleagues, have maintained thus far that the JDU has its own ideology, distinct from the BJP’s, and would stick to its “core commitments to secular principles and politics” despite being in alliance with the BJP.

On paper, the JDU avers that any dilution of Article 370 and the UCC, or any commitment to building a Ram temple at the disputed site in Ayodhya is violative of “secular principles”.

But now, Nitish suddenly appears a little shaken on those commitments. Mid-campaign, Nitish isn’t quite sure how defying the BJP will impact the future of JDU candidates in the fray. There is, of course, an unspoken dare beneath the demand the BJP is pushing — comply, or else...

Nitish’s allies have already littered the campaign with palpably divisive and anti-minority rants. The BJP’s Begusarai candidate, Giriraj Singh, declared on Wednesday that if Muslims wanted their three yards of burial space, they shall have to say Vande Mataram.

At a rally in Darbhanga on Thursday, Prime Minister Narendra Modi exhorted, in Nitish’s presence, that those who had a problem saying Vande Mataram deserve to lose their deposits.

Nitish, clearly, is having to quietly and helplessly sit out a campaign by his allies that runs contrary to his “avowed commitment” to secular politics.

The JDU is contesting 17 of Bihar’s 40 Lok Sabha seats — the same number as the BJP — but it is well aware that the support of the BJP is critical to its success in most, if not all, of those seats.

So here’s Nitish’s dilemma, being played out in the strategy rooms of the Bihar chief minister as this report is written: Should Nitish not agree to comply with the BJP’s demand, his ally will turn cool and the strike rate of JDU victories will suffer. Should he give in, and drop those critical commitments against the wishes of key authors of the manifesto, Nitish will lose even the fig leaf of being “committed to secular politics and minority rights”.

Nitish has made many convenient and contrary choices to suit his political survival and ends in the past. The unveiling of the JDU manifesto, when it does happen, will provide clues to which way he chose to go this time — the way of “conviction” or the way of convenience.