‘Exodus not in Congress rule; UPA gave us jobs’ 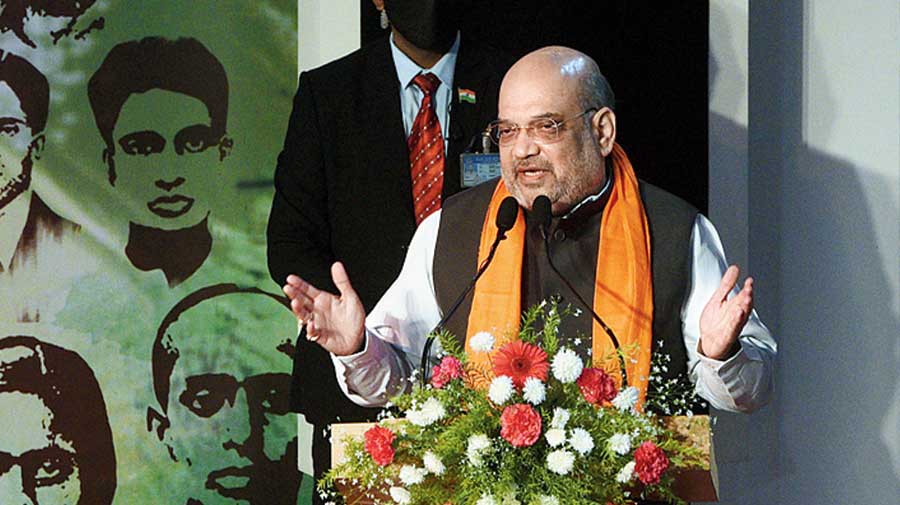 Several Kashmiri Pandit leaders have rebutted Union home minister Amit Shah’s claim that the community’s migration from the Valley took place during Congress rule, stressing that it happened in 1990 when the BJP-supported V.P. Singh government was in power.

They have accused Shah of having misled Parliament on this and on the subject of government assistance to displaced Pandit families, asking him not to claim credit for UPA initiatives.

Shah had claimed in the Lok Sabha last week, during a discussion on the Jammu and Kashmir Reorganisation (Amendment) Bill 2021, that the Pandits were displaced during Congress rule.

“They were not displaced during our time. There was Congress rule; they (the government) could not provide them (with) security and they (Pandits) became displaced in their own country,” Shah had said.

Satish Mahaldar, chairman of the Reconciliation, Return and Rehabilitation of Kashmir Migrants, said the Pandit exodus took place during the tenure of V.P. Singh’s National Front government, which the BJP supported.

“Unfortunately, the BJP didn’t have the courage to pull down the then government on such a national tragedy,” Mahaldar said in a statement.

The BJP and the Left had provided outside support to the V.P. Singh government, which was in power between December 2, 1989, and November 10, 1990. The Pandits’ migration began in January 1990.

The BJP pulled the V.P. Singh government down after L.K. Advani was arrested in Bihar while leading a countrywide rathyatra demanding a Ram temple on the disputed plot in Ayodhya.

Reacting to Shah’s claim that 44,000 Pandit families were being provided with a monthly assistance of Rs 13,000, Mahaldar said Jammu and Kashmir’s relief and rehabilitation department had put that number at 20,889 families.

Mahaldar said Shah was claiming credit for former Prime Minister Manmohan Singh’s scheme, launched in 2008-09, that announced 15,000 job opportunities for migrant Pandits and accommodated 6,000 Pandit youths in the government in the Valley.

Agnishekhar, who heads the hard-line Panun Kashmir that supported the BJP in the past, too said it was the UPA government that had provided 6,000 Pandit youths with jobs in the Valley and asked the BJP not to claim credit for it.

He too said the Pandits had been “forced to leave” during the rule of the BJP-supported V.P. Singh government. “The party (BJP) did not muster the guts to withdraw support to his government,” he said in a video statement.

Agnishekhar said the factual inaccuracies in Shah’s speech were “shameful” and “opportunistic”, and alleged the BJP government was misleading the nation for “political benefits”.

He said the Pandits had hoped the BJP would do something for the community. “We had supported the abrogation (of key provisions of Article 370) on August 5. But what did that yield for the Pandits? We are stuck in August 4,” he said.

“I want to warn Prime Minister (Narendra) Modi and Amit Shah that if such conduct persists, we will condemn your party worldwide.”

The Jagati Tenement Committee Soan Kashmir Front, a group that represents the thousands of displaced Pandits living in Jagti, Jammu, accused the BJP of drawing “political mileage” from their misery.

Mahaldar said the UPA government had built 5,242 two-room tenements for the Pandits in Jammu and provided a one-time assistance of Rs 5 lakh to each family in addition to student scholarships, assistance to farmers and other schemes.

“The Modi-led BJP government has been raising our plight at the international level to corner Pakistan. In the country, (it) raises our plight to pin down the Opposition,” he said.

“But in practice, what has it done for the community? It has even failed to constitute an inquiry commission or probe panel to investigate the crimes committed against KPs (Kashmiri Pandits).”

The Pandits have asked Shah to spell out when the BJP would fulfil its promise of resettling them in the Valley.