BJP falls back on muscular nationalism in manifesto

On top of the manifesto were 'nationalism' and 'national security', marking a contrast not just with the Congress’s manifesto but also the BJP’s previous effort in 2014 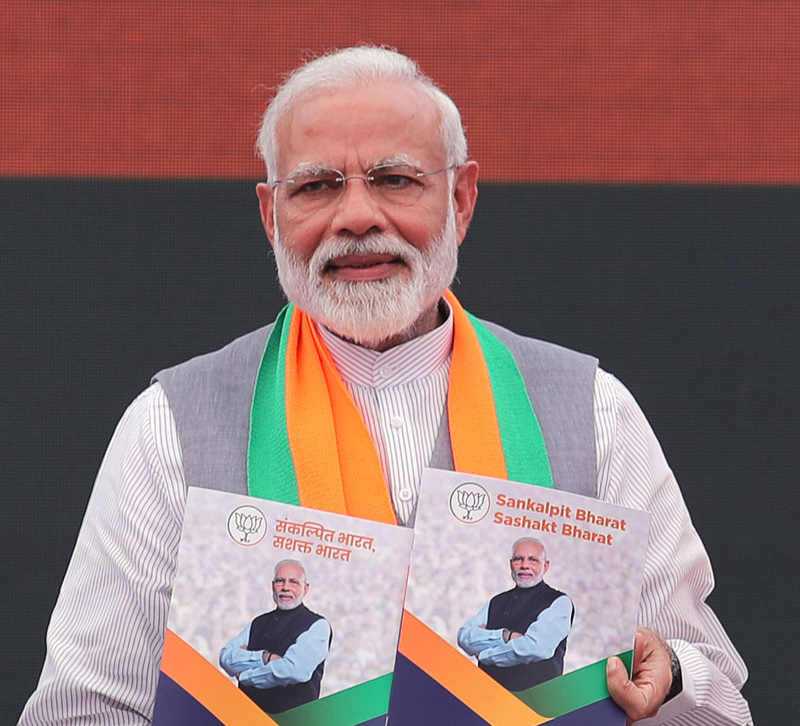 On top were “nationalism” and “national security”, marking a contrast not just with the Congress’s manifesto, with its promises of justice and jobs, but also the BJP’s previous effort in 2014.

Inflation, employment and entrepreneurship were among the first topics mentioned five years ago, when the BJP had swept to power promising “achchhe din” (good days). The BJP manifesto in 2014, too, did not mention “achchhe din” but the high-decibel campaign that pitch-forked Modi to the pinnacle then was built around the promise of an imminent turnaround.

This time, jobs have been relegated to a single paragraph on Page 29 under the subhead: “Creating Opportunities for Youth”.

References to internal and external security were buried deep inside the 52-page 2014 manifesto but adorn the front pages this time under the “Nation First” theme, reflecting the party’s focal point since the Balakot air strikes.

The BJP has adopted strident postures on the call for a uniform civil code and certain privileges accorded to Jammu and Kashmir residents — all subsumed under “Nation First”.

The 2014 manifesto had rued 10 years of “jobless growth” and promised “high priority to job creation and opportunities for entrepreneurship”. The lone paragraph on jobs in 2019 focuses on “encouraging the spirit of entrepreneurship amongst the youth”, a shift the BJP has sought to project as one from “job seekers to job givers”.

“We will create new opportunities of employment by providing more support to the 22 major ‘Champion Sectors’ identified as the main drivers of (the) Indian economy,” the paragraph says.

“We will optimally leverage the untapped employment-generation potential of sectors such as defence and pharmaceuticals to take advantage of the opportunities available in domestic and foreign markets.” 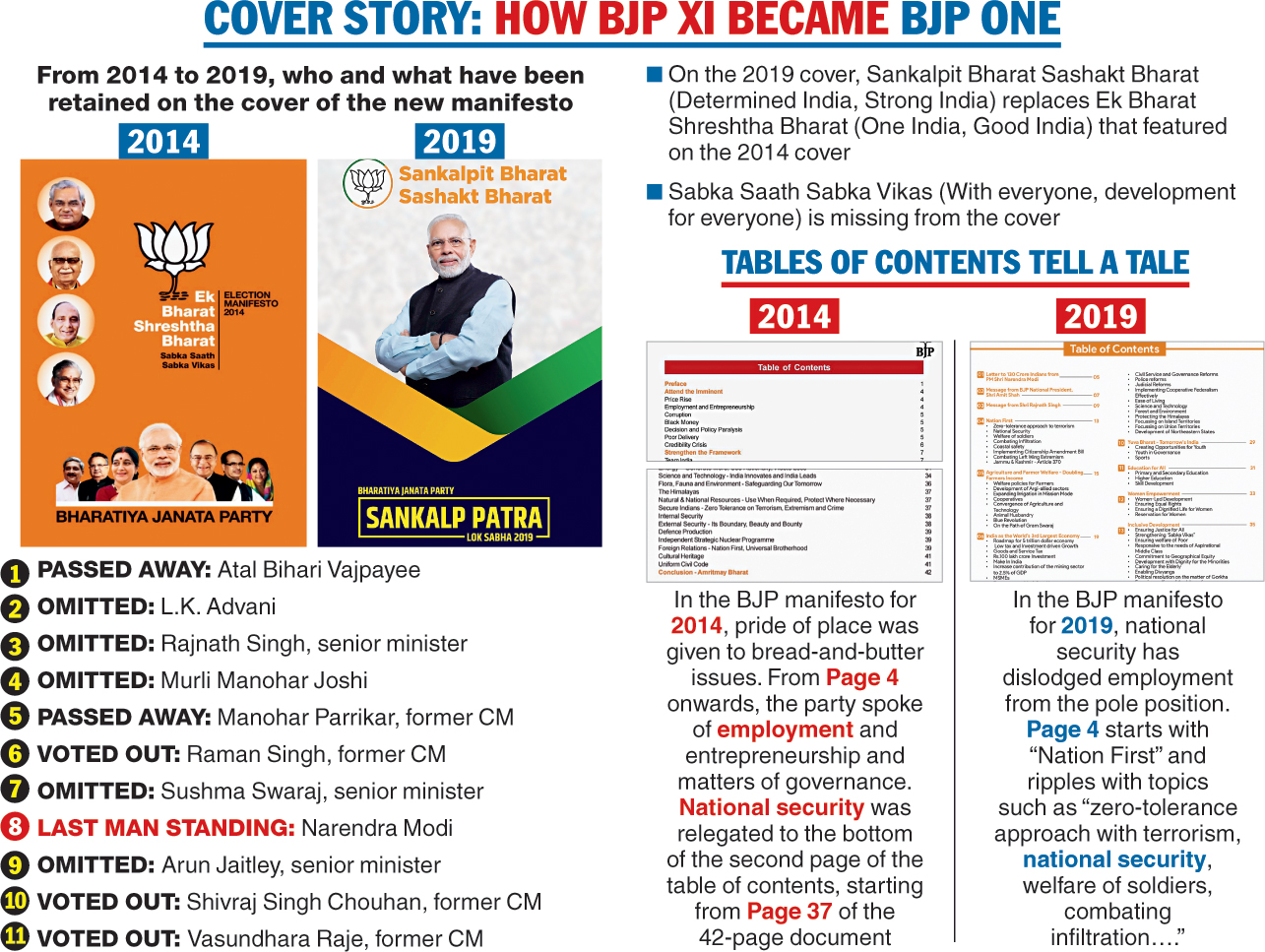 National security, though, takes up two pages and kicks off with a tribute to “the decisive leadership of Prime Minister Shri Narendra Modi” and a nod to “the surgical strikes and the air strikes carried out recently”.

The manifesto promises to scrap Article 370, which gives a special status to Jammu and Kashmir, and Article 35A, which bars non-residents from buying immovable property or securing government jobs or scholarships in the state.

“We reiterate our position since the time of the Jana Sangh to the abrogation of Article 370,” the manifesto says, referring to the BJP’s previous avatar.

“We are committed to annulling Article 35A… as the provision is discriminatory against non-permanent residents and women of Jammu and Kashmir… (and) is an obstacle (to) the development of the state.”

The manifesto stresses the BJP’s commitment to the Citizenship Amendment Bill, which it says would speed up the grant of citizenship to Hindu, Jain, Buddhist and Sikh immigrants from Pakistan, Bangladesh and Afghanistan. It’s silent on Parsis and Christians, who are mentioned in the bill as beneficiaries.

“We are committed to the enactment of the Citizenship Amendment Bill for the protection of individuals of religious minority communities from neighbouring countries escaping persecution,” it says.

Home minister Rajnath Singh promised to protect the “cultural, social and linguistic identity of the people of the Northeast” while implementing the citizenship bill.

The manifesto reaffirms the BJP’s longstanding position on enacting a uniform civil code, saying it is key to “gender equality”.

Immediately after “Nation First”, come farmers’ issues. The manifesto promises to double farmers’ incomes by 2022 and offers a pension scheme to small and marginal farmers to try and counter the farm crisis that could spoil the BJP’s chances in many heartland states.

The manifesto promises to expand the financial support scheme of Rs 6,000 a year, announced in the budget, to “all farmers in the country”.

To its support base of small traders, the party has promised a pension scheme and an “accident insurance of Rs 10 lakh (to) all the traders registered under GST” apart from a “national traders’ welfare board”, a national policy for retail trade and a “merchant credit card”.

To the middle class, yet another vote bank, the manifesto promises a lower tax rate, an improvement in compliance and rewards for honest taxpayers.

Modi said he wanted the people to hold his government accountable and had therefore set out 75 goals, covering most of the key promises in the manifesto, to be achieved by 2022, when India completes 75 years of independence.

He then jumped another quarter century to talk of 2047, when India would complete a century as an independent nation.

“Let us together imagine what kind of India we want by 2047. The BJP pledges to make the next five years the foundation-laying period for the India of 2047,” he said.