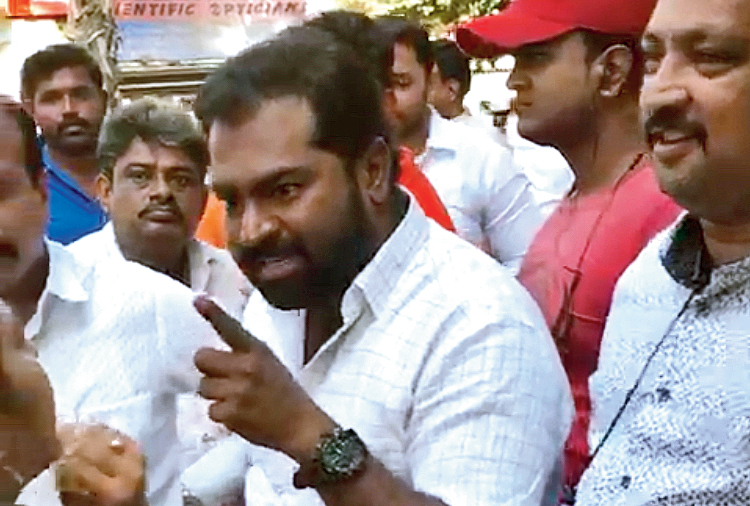 BJP Yuva Morcha workers heckled some college girls and tried to bully them into supporting a pro-citizenship act banner they had strung up on the wall of the women’s institute but had to retreat after the students refused to be intimidated and the police arrived.

The girls, all students of the Jyoti Nivas College, a Christian institute in Bangalore’s upscale Koramangala area, stood their ground despite being told “to go to Pakistan”.

The harassment — in a season of violent attacks on students elsewhere in the country — came to light when two video clips recorded by some students went viral on social media late on Wednesday.

One student, who spoke to journalists on Thursday, said the girls made it clear that they “wouldn’t be dominated” by the abusive political workers.

The Yuva Morcha activists had on Wednesday strung up the banner on the college wall in support of the Citizenship (Amendment) Act. It carried the title “India Supports CAA” and had pictures of Prime Minister Narendra Modi, Union home minister Amit Shah and the local BJP MP, Tejasvi Surya. Below was a large blank space for signatures in support of the controversial law.

Some college girls noticed the banner when they stepped out around 4pm.

The Yuva Morcha workers asked the girls to put their signatures in the blank space. A college source said the girls refused and asked the political workers to remove the banner since it had been put up on their college boundary wall without permission.

But the girls refused to back down. A second party worker is then heard saying in a threatening voice: “You want an argument or a debate?”

“You are (already) arguing and not debating,” one of the students counters. “You are shouting.”

By then many girls from the college had gathered at the spot and started shouting “No CAA”.

The first worker then tells the girls “to go to Pakistan”. “You are a student, not owner of this college. Let this college owner come and talk to us,” he says in a bullying tone.

The men removed the banner after police arrived within 15 minutes and left but not before they had posed for selfies with the banner as backdrop.

On Thursday, several students held a silent protest holding placards that said: “Don’t force your opinion”, “Show us your degree, we will show our documents” and “No CAB (CAA), No NRC.”

An undergraduate student who declined to be named told reporters: “It was a BCom 2nd-year student who first saw the banner (on Wednesday) and questioned the BJP workers. When they started heckling her, several of us joined to support her.”

Local Congress MLA Ramalinga Reddy, who visited the college on Thursday morning, asked deputy commissioner of police Isha Pant to ensure adequate security for the institution. “I will not let any violent incidents like what we saw in Delhi happen here,” the former home minister said.

His daughter Sowmya Reddy, who represents Jayanagar in the Karnataka Assembly, said she too had spoken to Pant. “She assured all help,” Sowmya told The Telegraph. “What have they done to the country as even children are targeted by their party workers. They are grown-up men threatening young girls. Don’t these people have daughters and sisters back home?”

The college has not commented about the incident but a source said the management had taken precautions to ensure the safety of students.