Nitish expresses surprise over the amount of rainfall and floods

The chief minister took a chopper ride over East Champaran, West Champaran, Sheohar, Sitamarhi and Muzaffarpur districts to get a first-hand account of the deluge 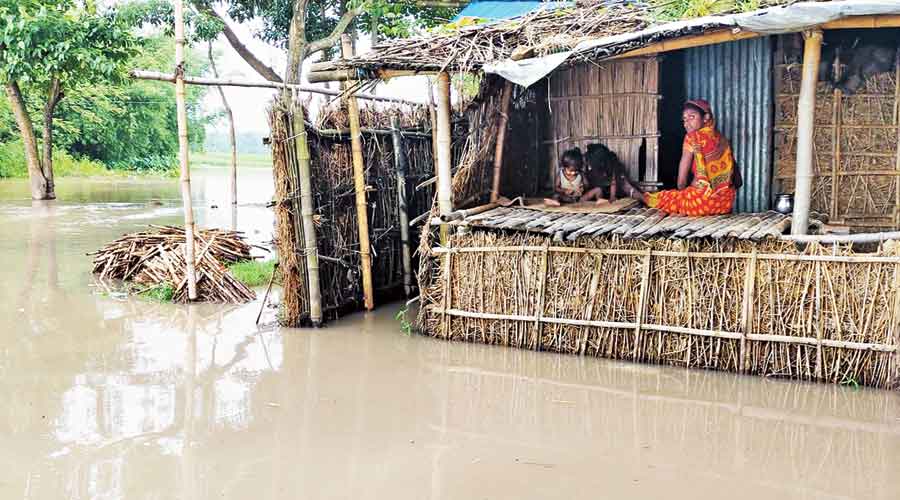 Bihar chief minister Nitish Kumar on Tuesday expressed surprise over the amount of rainfall and deluge in June and July in the state after undertaking an aerial survey of the flood-affected areas.

“I saw several places have been submerged. This is just the beginning of July. So much flood had never come so early in the state. It used to affect in late July, August or September. Such a situation is rare,” Nitish told reporters after the aerial survey.

The chief minister took a chopper ride over East Champaran, West Champaran, Sheohar, Sitamarhi and Muzaffarpur districts to get a first-hand account of the deluge that has affected a large population and forced thousands to abandon their homes in search of safer places.

“Floodwater has reached several places, but not all areas. I also saw the state of several rivers. I am going to conduct a meeting with the district magistrates of areas affected by the floods and discuss the situation. I will survey the situation in Samastipur, Madhubani and Darbhanga on Wednesday. My present concern is to provide help to the people,” Nitish added.

This is the second spell of floods in Bihar this year. The first one struck in mid-June just as the monsoon descended in these parts bringing very heavy rain in Bihar and Nepal. The neighbouring country has the catchment areas of a majority of rivers flowing through Bihar.

Weather scientists also corroborated Nitish’s observations pointing out that the rainfall was way above the normal at this time of the year.

“The above normal rainfall could be attributed to heavy pre-monsoon rain in the first week of June due to a depression, early onset of monsoon and the monsoon trough being positioned over Bihar and eastern Uttar Pradesh,” he added.

Civic amenities, including roads and hospitals, have been submerged or damaged at several places in these districts. People have had to also grapple with the disruption of power supply.

Though the discharge of water from the Valmikinagar and Birpur barrages into the Gandak and Kosi rivers, respectively, decreased on Tuesday, several of the flood-causing rivers are flowing above the danger level. These rivers include the Bagmati, Budhi Gandak, Kamla Balan, Adhwara and Khiroi.