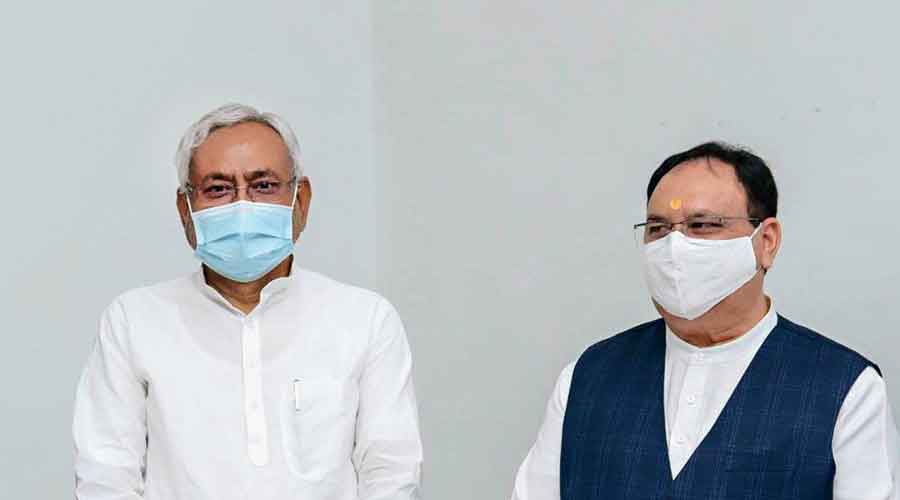 BJP president J.P. Nadda paid a visit to chief minister Nitish Kumar at his official residence here on Saturday to hold a discussion on seat-sharing among the National Democratic Alliance (NDA) partners for the Assembly elections.

The meeting between Nadda and Nitish lasted for around 40 minutes and assumes significance in the backdrop of the ongoing tussle between the chief minister’s Janata Dal United (JDU) and the Lok Janshakti Party (LJP).

Sources in the BJP said that the party was looking to contest an equal number of seats to the JDU, which will be in tandem with the 2019 Lok Sabha elections when the two parties fought on 17 seats each, leaving six for the LJP.

“Several of our party leaders have been demanding since last year that we must contest an equal number of seats to the JDU in the state elections. We allowed the JDU to do so in the last Lok Sabha po-lls and it should now return the favour. It is as simple as that,” a senior BJP leader said on the condition of anonymity.

“Of course our party president Nadda will take the final call on seat-sharing, but the negotiations have started. The two parties could contest on 100 seats each, leaving 43 seats to be shared between the LJP and Jitan Ram Manjhi’s Hindustani Awam Morcha Secular (HAMS). This formula will be a win-win one, and will keep everybody happy,” the BJP leader added.

However, JDU sources said that Nitish is not comfortable with the idea and wishes to replicate the ratio of seats contested by the two parties in the 2010 Assembly polls in which they fought together because the NDA had swept the polls by winning 206 out of the total 243 seats.

Back then, the JDU had fielded candidates on 141 seats while the BJP contested on 102 seats. This pegs the ratio at 1.4 to 1, and Nitish wants the seat sharing to be done in the same manner, while leaving some seats for the LJP and the HAMS.

A senior JDU leader said that Nitish is wary of contesting on an equal number of seats because the strike rate of the BJP was better in the 2010 polls. It had won 91 out of 102 seats, a success rate of around 90 per cent, while the JDU clinched 115 seats out of 141 — a strike rate of 82 per cent.

“Suppose the two parties contest on an equal number of seats and the BJP wins more. It could cause problems regarding who would be the chief minister. Moreover, the top BJP leaders, including Prime Minister Narendra Modi, Union home minister Amit Shah and Nadda have always asserted that the polls would be fought under the leadership of Nitish, but have refrained from saying even once that he will be the next chief minister,” the JDU leader told The Telegraph.

In fact, Nadda, while launching his party’s Atamnirbhar Bihar campaign focusing on economic, social and cultural uplift of the rural people, iterated: “The alliance of BJP, JDU and LJP will contest the polls under the leadership of Nitish Kumar and emerge victorious.”

Meanwhile, LJP chief Chirag Paswan told mediapersons on Saturday that his party would stand with “whatever decision the BJP takes”. “I have no differences with the JDU, and raised issues related to development because I am a public representative,” he said.

Chirag’s words lend credibility to the thoughts of a section of JDU leaders that there could be a situation after the polls in which he may object to Nitish becoming the chief minister again.