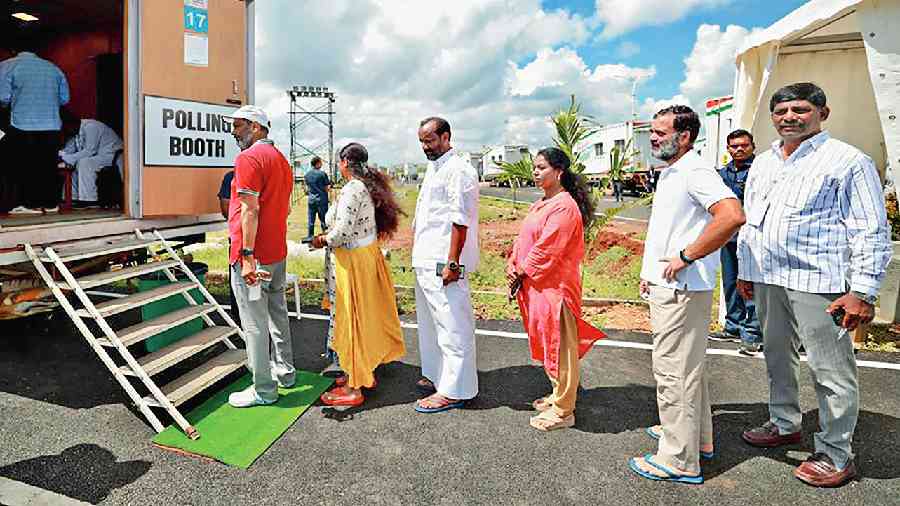 Rahul Gandhi on Monday said the Bharat Jodo Yatra had challenged the fallacious assumption of those who had thought India would silently surrender after they had captured key institutions.

“They think, ‘Once we have captured (key institutions), India will fall silent’. This is their misconception. India will not fall silent, it will fight back.”

Although the Congress MP did not elaborate, he has on several occasions in the past spelled out that the RSS-BJP have perpetuated their power by capturing all key institutions, including the media, the Election Commission, bureaucracy and central investigation agencies.

The Opposition operates using this democratic framework but that is no longer available under the Narendra Modi regime, Rahul has contended.

On Monday, he iterated that the Yatra was the only option left for the Opposition.

“We are doing the job of the Opposition. But other than walking on the road and communicating directly with the people, there was no alternative. There was no other way out. We had to meet the people of this country directly,” the Congress leader said.

Rahul has in the past spoken of a communication crisis because of the mainstream media’s blind support for the Modi government and sustained campaigns to target and malign its political opponents.

He has alleged that television channels are controlled by two or three industrialists who ensure publicity and protection for the Prime Minister. The Congress has often regretted that even issues such as the worst unemployment crisis and price rise are not highlighted.

“This Yatra is not for today, this is for our coming generation,” another added.

Rahul said he was looking forward to the next couple of months, conceding that he had been worried initially that some of the Yatris might not be able to complete the 3,670km walk.

When a Yatri asked whether he could walk a little slower to ensure everybody moved together, Rahul said: “We are starting at 6.30am. If we walk slow, we will be able to take the break (only) at 12. Then you will complain it is too hot. If we walk fast, we can avoid the heat.”

Another Yatri said the marchers don’t feel tired at the end of a day’s walk, prompting Rahul to joke: “If you want to feel tired, that can be done. We can increase the distance.” Amid laughter, others said the current distance was enough.

The group said they were having fun walking through villages, witnessing their culture, speaking to people at teashops.

After a Yatri mentioned blisters, Rahul asked if everyone had got blisters. One young woman responded that she had not, and Rahul said he hadn’t, either.

Asked which sunscreen he was using, Rahul laughed and shook his head vigorously: “No, no sunscreen. My mother sent one but I am not using it.”

He was asked how he dealt with the language barrier when people communicated with him on the way. “If you listen to somebody without showing affection, that means nothing. Even if I don’t understand what the person is telling me, I meet them affectionately and the message goes out. Whether I understood or not, if I show affection, the intention is clear,” the Congress leader said.

What did he do between 7.30pm when the Yatra broke for the day and 6.30am the following day when it resumed, Rahul was asked. “I’ll do some exercise, I’ll read, I’ll call up my mum and see what she is doing; I’ll call up my sister, speak to some friends.”

The break from walking between 10.30am and 4pm is usually packed with meetings and interactions with different delegations. Unlike other Yatris, Rahul rarely gets rest during the day. On Monday, he went out to see the homes and factories of textile entrepreneurs and workers who had met him on Sunday.

'Cong poll result will be a surprise'