Better together? Alliance between SP, BSP could have defeated BJP in Uttar Pradesh, poll results suggest 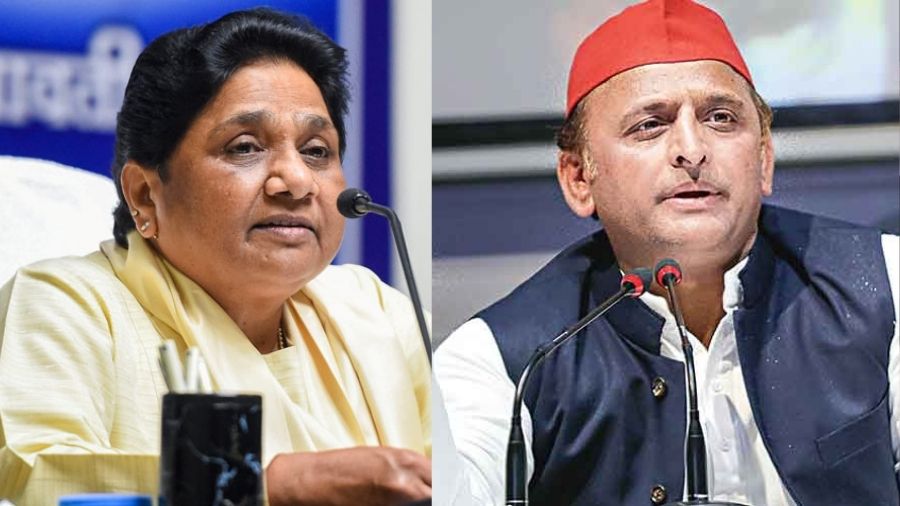 The BJP won a smashing victory in Uttar Pradesh but could the picture have been very different? The answer surprisingly is yes. An alliance between the Samajwadi Party (SP) and Mayawati’s Bahujan Samaj Party (BSP) could have doubled the opposition’s tally from around 125 to a winning 250, supposing that voters had voted for a combine. That would have been more than enough for a clear victory that could have taken the two parties well over the halfway mark to form the government.

Both the SP’s Akhilesh Yadav and the BSP’s Mayawati dismissed the idea of an alliance before the election but the fact is that in around 125 seats the SP and BSP together collected more votes than the BJP, which finally won the election and which is now forming the new government.

The SP and its allies, like the Rashtriya Lok Dal (RLD) together, gathered 125 seats. In another 125 seats the SP and the BSP combined garnered more votes than the BJP. Potentially, therefore, an SP+BSP combine plus their allies could have picked up around 250 seats in the 403-seat assembly.

The seats where an SP+BSP combine could have wrested victory from the jaws of defeat are spread out across the state and include Badaun in the heart of Western UP which the BJP won by raking in 101,096 votes. The SP also put in an impressive performance getting 89,917 votes but that still left the party a long way from the winner’s post. But the picture turns upside down if we add the BSP’s 23,135 votes. Together, the two opposition parties would have got a winning 113,052, more than enough to claim the seat.

Or look at Badlapur in Jaunpur district at the other end of the sprawling state. Here, the BJP squeezed home to victory, getting 82,391 votes just ahead of the SP’s 81,065. Add the BSP’s 34,792 votes and inevitably, the picture changes and the victory would easily have gone to an SP+BSP combine.

Sceptics will point out that such electoral alliances have been tried out before and failed to pay dividends. The SP and BSP had tied up for the 2019 general elections but their alliance failed to bring in the desired results at the ballot box. Soon after the elections, Mayawati declared firmly that the alliance experiment had failed and she was breaking away from it.

What was different this time round? The main fact appears to be that Akhilesh Yadav, though he is said to have started late, put considerable effort into the campaign. And the results were clearly on show. The SP itself moved from 47 seats in the last legislative assembly to 112 this time round. That was a huge leap forward even if it wasn’t anywhere near good enough.

Consider a few of the closer battles. In Bahraich, near the Nepal border, the BJP claimed the seat with 107,628 votes. The SP was close on its heels with 103,550. The BSP didn’t put in a great performance but managed to collect 10,299 votes. Once again, that would have been sufficient to allow an SP+BSP combine to collect the winner’s crown.

In some constituencies the BJP came out clearly in front of the other single parties but it would still have lost if it had faced an SP+BSP combine. Look at Bakshi Kaa Talab in Lucknow district where the BJP romped to victory with a massive 147, 922 votes. But even this wouldn’t have been enough to get them home and dry if they had been facing an SP+BSP united combine. The SP also did well in the constituency, picking up an impressive 120,134 votes. Put that together with the BSP’s 35,167 and the two parties would have got 155,301 votes – enough to claim the seat.

At times, an alliance might have snatched victory from the jaws of a very close defeat. In Katra, Shahjahanpur district, the BJP scraped home by around 350 votes, getting 77,800 votes compared to the SP’s 77,443. Add the BSP’s 15,236 and the picture changes and would turn into a comfortable win for the two parties if they had been together.

Psephologists and election analysts will argue that voters would have looked at the two parties differently if they had been in partnership. Both primarily represent different castes that can be at loggerheads at the village and street levels. The Dalit Jatavs who form the BSP’s base and the intermediate castes that are considered to be the SP’s core backers have rival interests. Nevertheless, the fact is that the SP’s improved vote share combined with the BSP could have changed the picture for both parties.

The Uttar Pradesh assembly elections also prove the truth of the old pollsters’ axiom that only a united opposition can win elections and dislodge a strong ruling party which has a large chunk of seats. The SP proved its mettle in this election by improving its percentage of votes from 22 per cent to 32.1 per cent.  The BSP which is in third position in the state got 12.1 per cent of the vote.

In percentage terms, the BJP was ahead of both parties with 41.29 per cent of the popular vote. But combine the SP and the BSP and the picture changes and they get 42.2 per cent.

And at the constituency-level, the difference in the number of seats won could have been even greater.

One constituency which may prove the Index of Opposition theory is Koraon in Prayagraj district. Here, the BJP got 84,587 votes and was well out in front of the SP which had 60,100 in its kitty. The BSP in third position picked up 26,383 votes and if there had been an alliance the SP and BSP would have moved to first position just in front of the BJP. Besides that, this was one constituency where the Congress also did not too badly by getting 21,462 votes.

In almost all the constituencies where it stood the BSP took the third place behind the BJP. Pollsters believe that some BSP backers voted tactically and switched their vote to the SP as it looked the most likely to unseat the BJP.

Nevertheless, the BSP still hung on to a steady core of backers and in most constituencies picked up between 20,000 and 50,000 votes. This, inevitably, worked against the SP in many constituencies and could have made all the difference if the two parties had joined forces.

But the fact remains that the mood had turned against alliances when the polling season began. The SP and BSP had tried it at the 2019 general elections and concluded that it hadn’t paid dividends. In the 2017 state elections, the SP had tied up with the Congress and that also failed to have any impact. This time round, every party was determined to go it alone. But the result could be the saddest words in politics and life for the SP and BSP: ‘It might have been.’